The Promise Of Plague Interview


2. You have a new album coming out in March,musically how does it differ from the recording you had released in 2016?

It sounds like a completely different band. I wasn’t fully aware of exactly how different it was until I listened to both albums side by side. There really is little comparison between the two, there’s something more emotive for sure, it’s a bit darker, maybe a little more rock added here and there. I’m not sure why it sounds so different really but from beginning to end you can only hear trace elements of the previous recording.


3.The band members have been a part of a good number of bands, what is it that you bring into the music of the band that you are not able to do with your other bands or projects?

There are no formulas to The Promise of Plague. Anything goes. With other bands there is a sound that defines the band, a tone, a way of playing, we don’t have that. Any riff that you feel, any sound that you hear, it belongs in our music.


4.What are some of the lyrical topics and subjects the band has explored so far with the music?

I guess on the surface they cover the very typical topics you’d expect. Loss, Regret, Emptiness, Despair but on a deeper level it’s a personal reflection of how I deal with those feelings. The self hatred, confusion and doubt that you experience in life and love. Many topics deal with my attempt at understanding how you can become a stranger to yourself, or how in the blink of an eye your loved ones can so quickly become that stranger. The lyrics are a delphic mass of confusion and anger and at times I’m not so sure if I’m pointing the finger at others, or at myself.


5.What is the meaning and inspiration behind the name 'The Promise Of Plague'?

We sail on the breeze of disease

if you had eyes even the dead could see

our hearts beat so swiftly

but we are not forever


It is derived from a section of lyrics that I wrote as the first The Promise Of Plague song. The following line was to be “This is my promise, a promise of plague” but it was cut from the final lyrics because it didn't really fit musically.

The album is titled “The Tomb Of Lost Lovers” essentially the death and remembrance of love. Not necessarily romantic love as the lyrics deal not only with romantic love, but also with the love of self, the love of ideas and the love of life, and the destruction and the loss of that love. The imagery is basically a representation of that idea. Plus I really loved the Pungent Stench “Been Caught Buttering” album cover and wanted to rip that off.

We’re a studio band but we did play a show last year as novelty. It was a local festival. We didn’t fit the bill at all but I think it went over well enough. Probably won’t play any other shows. Our other bands have played some pretty interesting shows, but this band will stay a studio project for the foreseeable future.


8. Do you have any touring or show plans once the new album is released ?

Not at all. I believe Jim and Ashley have a new band and they are gearing up for the studio with some possible live shows, I have 2 other projects in the works, Märcoda (electro industrial) and I may revive Empyrean Asunder (industrial metal). I might do a few shows here and there with those projects.


9.Currently the band is unsigned, are you looking for a label or have received any interest?

I’m not so interested. If a label wanted to sign us and had zero expectation of me doing anything other than just writing an album here and there I’d consider it but I’m not going to dedicate myself to it, I won’t tour or play shows often.


10.On a worldwide level how has the reaction been to your music by fans of black metal, punk and industrial?

I didn’t think it would go over well at all, the first release was raw black metal mixed with a good amount of punk, industrial and electro but the metal crowd seemed to enjoy it enough. Hopefully we get the same reception with this new material.


11.What is going on with some of the other bands or musical projects these days that some of the band members are a part of?

Jim is working on a power metal band and has another project that is a good mix of prog rock, metal, and post-black metal called A Locust Tide. Both bands are currently in the writing / recording stage.

Ashley is a member of a variety burlesque dance and entertainment troupe Va Va Vixens, and performs with them. I’m working on the aforementioned Märcoda (electro industrial) and Empyrean Asunder (industrial metal).  Märcoda was just included in an Alfa Matrix compilation and I have 4 songs that are nearly finished for a new release and I’m kinda getting ideas together for a new Empyrean Asunder release.


12.Where do you see the band heading into musically during the future?

Don’t know really. I love Disembowelment (Australia) and I’ve always wanted to incorporate more of that style of doom into my music but it’s never really materialized while writing. I’d imagine the next release will be completely different than the previous two.


13.What are some of the bands or musical styles that have had an influence on your music and also what are you listening to nowadays?

Chris is inspired by 80’s-90’s metal, Megadeth, Misfits and anything Glenn Danzig.


14.What are some of your non musical interests?

I’m a microbiologist and a dad so if I’m not looking at diseases I’m watching cartoons. I hike and kayak a lot as well. Jim is an amateur archeologist, an outdoorsman and a bodybuilder. Chris makes bourbon and knives (Not Nice Knives) and spends his free time with his family. Ashley researches unusual/esoteric subjects, experiments with art and makeup, and goes rock hunting for minerals, crystals and fossils.


15.Before we wrap up this interview, do you have any final words or thoughts?

All of my music is available online for free. So go to bandcamp, youtube or google the titles and download some free music.

Posted by OccultBlackMetal at 5:43 PM No comments: 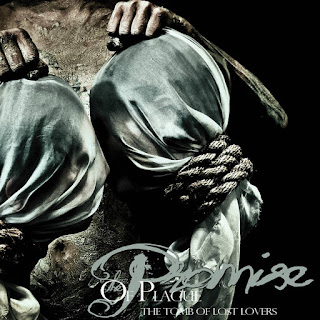 Throughout  the  recording  you  can  also hear  a  great  mixture  of  slow,  mid  paced  and  fast  parts  as  well  as  the  music  also  mixing  in  a  decent  amount  of  punk  elements. As  the  album  progresses  they  also  bring  in  a  cover  of  Venom's  "Warhead"which  also  introduces  melodic  guitar  leads  onto  the  recording  and  a  later  tracks  brings  in  female  vocals and  spoken  word  samples.  The  production  sounds  very  professional  for  being  a  self  released  recording  while  the  lyrics  cover  dark  themes.

www.facebook.com/thepromiseofplague
Posted by OccultBlackMetal at 7:44 PM No comments: