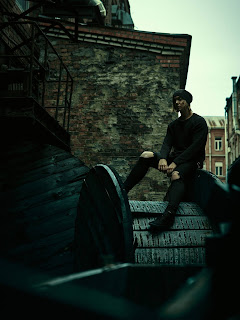 1. For those that have never heard of you before, can you tell us a little bit about the musical project?

‘Tragedy In Hope’ is a black metal based music project, where a lot of attention is paid to small details in the lyrical and musical elements. For example, you can hear the tiger’s roar on “Smile At Death” single, which is a reference to the “Survivor - Eye Of The Tiger”, or if you are attentive enough, you can figure out the estimated date when events of “Grim Love Story” happened.

2. In November you have a new ep coming out, musically how does it differ from your previous full length and singles?

It is much better produced, a structure of some tracks is more complex and the lyrics contain more little details.

3. What are some of the lyrical topics and subjects the band has explored so far with the music?

In short, basically, it’s all about tragedy in hope.

4. What is the meaning and inspiration behind the name 'Tragedy In Hope'?

Actually, the name can be understood in very different specter of meanings. Everything depends on how a certain person sees ‘Tragedy In Hope’ and I prefer it to be so. All I can say, for instance, it can be a feeling, a situation, a way of life etc.

As for inspiration, I love running, especially at the evening, when it is already dark outside. Sometimes it feels just sad.  I usually go running, when I feel it. The state of sadness goes to the different level, when you run. It doesn’t really feel sad anymore. I would say, it rather feels like euphoria, but in a quite twisted way. I wanted to find the word or the phrase, which would most closely convey this feeling. Eventually, I came up with ‘Tragedy In Hope’.

There were many factors, which played a huge role in it as well, I chose running just as an example, because ‘Tragedy In Hope’ applies to many situations in our lives.

5. Can you tell us a little bit more about the artwork that is presented on the new ep cover?

The devil is in the details. This artwork contains a lot of references to the lyrics of the EP. Like, for example, you can see a falling star at the upper-left corner of the artwork. The thing is, it’s not a star, it is Halley's Comet, which is mentioned in the track “Pierce The Heavens”.

Compare to void inside us,

An ember of joy smolders.”

1. In short, the whole track is a wordplay about space.

2. One of the meaning of ‘Tragedy In Hope’, as I said already, is a twisted feeling of euphoria, when you feel sad and happy simultaneously.

3. An ember of joy is a reference to the whole ‘Tragedy In Hope’ meaning and to the track “Smile at Death”, where hopeless madmen try to save their embers (hopes) after realizing that life isn’t that easy, as it seemed to before.

5. WHICH MEANS, our hope, even if it is little, is brighter than any light in the universe.

6. Anyway, we should never forget, tragedy is in hope.

As you can see, it’s just one little detail, but there is a lot behind, and there are many such details, which is just crazy. The EP is just around 12 minutes, but I tried to put the whole world in it.

Also, there is an artwork for each single, which contains such little details as well.

6. Has the band done any live shows or is this strictly a studio project?

It’s a studio project so far, but I don’t exclude a possibility of live shows in the future. Right now, I am alone writing music and lyrics.

I am not looking for a label at this point. Cooperation with a label is just unprofitable for both sides right now. I am sure as soon as I and a label have something interesting to suggest to each other, this question will be reviewed.

8. On a worldwide level how has the reaction been to your music by fans of symphonic black metal?

I would say, it has been quite mixed. On the one hand, there were people who really admired my previous work and told me how dramatic and passionate it was. On the other hand, I received comments like “Just some hysterical girl squeals. Nothing interesting in it”. I can understand such hate comments, for I think some people just didn’t get the point I wanted to say. It isn’t about production after all, it’s about the content I put in my songs. Wordplays, mindgames etc.

I am writing something right now, but I don’t want to spoiler anything. All I can say, it will still be black metal based music, but slightly different from the EP.

I would say, there were tracks or rather pieces of tracks, which affected my music style. For example, I am not really into this band, but in teenage years I loved listening to “Gorgoroth – Funeral Procession” 1997 version. I still think it is a great, underestimated track.

Here are last three projects I’ve been listening to recently:

Nothing can be better for me than a good run, especially at the evening. Plus points if it is the full moon.

Some people say that music is twice as good if it is enjoyable even without words.

I say that lyrics are twice as good if it is enjoyable even without music :)

Pre-order: https://smarturl.it/tragedyinhope
Posted by OccultBlackMetal at 12:50 AM No comments: 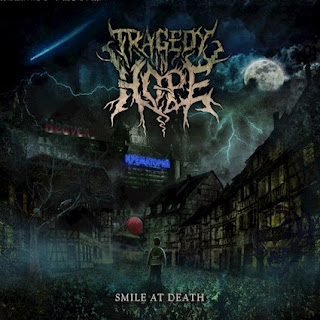 Tragic  sounding  keyboards  start  off  the  ep  while  also  introducing  symphonic  elements  onto  the  recording  which  also  mixes  in  with  the  heavier  sections  of  the  songs.  Cries  can  also  be  heard  briefly  along  with  the  riffs  also  use  a  decent  amount  of  melody  as  well  as  the  vocals  being  mostly  grim  black  metal  screams.


Posted by OccultBlackMetal at 1:46 PM No comments: