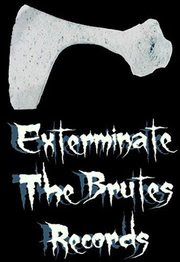 1. Can you tell us a little bit about yourself, your projects and record label?

1. Hi this is Robert Johnson, founder of Exterminate the Brutes Records, singer/bassist in Third World Abortion, Octagon, and Amadeus st. Vitus. I began playing in punk bands when I was really young and eventually delved into heavier and more underground stuff after discovering Morbid Angel. Back when the record industry thought death metal was going to be the next big thing and you had major labels like Warner Bros. putting out satanic music. I started Amadeus st. Vitus back in 2003 and we have had several independent records that we have put out ourselves. Third World Abortion came along later when I wanted to go in a different direction and couldn't see dragging the other project across the coals. I needed someone to release my stuff so I started my own label, which has grown much and includes many more projects other than my own as many artists are sending in their demos for review and release. The name comes from the novella "Heart of Darkness." Get it and read it. Its worth it.

2. How would you describe the differences between the 3 bands you are in?
2. Really, its just a question chronology. I write based on my mood and the projects tend to reflect that. Amadeus st. Vitus was inspired by many different artists that are not immediately apparent in the music. They hide behind the lines. With Third World Abortion I have been in a black metal mood and also love the sound of tape. Wicked Stench is a project fronted by one of my old friends. It is very doomy death metal.

3. How have the live shows been for the bands so far?
3. Live shows fluctuate everywhere you go. You can pack one night then play to two people the next. Shows have gone well though.

4. What was it that inspired you to create your own record label?
4. There are not enough labels out there that truly cater to the underground. It is my goal to do just that.

5. How has the feedback been to your releases so far from extreme music fans worldwide?
5. Our responses have been excellent and encouraging. It's almost as if everyone was waiting for someone to step up to the plate. With the dying, corporate music world, music is being put back in the hands of the artists. It's a very exciting time.

6. Out off all the bands that you have which one would you consider your main project?
6. Third World Abortion is my main focus right now. The others are no less important to me however.

7. What is the inspiration between your lyrics?
7. My lyrics are inspired by everyday life. Whatever you put into your brain will grow and yield something else. That's something they don't teach you in school. If you learn something for a history test in third grade it sticks with you and you think about that and it can even come out later in the creative process. Look at Iron Maiden if you need an example. Not that they are underground but they are a prime example.

8. What are some bans or music styles that have influenced your music and what are you listening to nowadays?
8. I grew up listening to classic rock with parents that had a bad prejudice to country music. I stole my first metallica tape, And Justice For All, when I was 9. I got into punk rock as young kid and started playing guitar in a band. I got into Deicide, Cannibal Corpse, Exodus, Morbid Angel, etc. when I was 15 or 16. I discovered Black Metal shortly after that and have had a love for the underground for many years. I am currently spinning Burzum-"Belus" Darkthrone-"Under a Funeral Moon" Eyehategod-"Confederacy of Ruined Lives" and Gorgoroth-"Destroyer"

9. Out off all the releases that you have put out so far which one are you the most satisfied with?
9. I really love the Wicked Stench-"Spreading the Word. The riffs really get stuck in my head and I catch myself humming them all day. I think that makes it great. It sticks out in your mind.

11. What are some goals that you have set out so far for your bands and record label?
11. We are going to push things as far as they can go. I tend to never give up. Watch it go!

12. How would you describe the underground scene in your home state of Mississippi?
12. It is actually more passionate than most of the scenes I have experienced. There are so many cover bands here covering "Brown Eyed Girl" that when a band plays originals, people tend to stick together. The metal scene is building at an unbelievable rate here.


13. What are some of your interests outside of metal?
13. I enjoy reading, cooking, and drinking beer. I also enjoy art, as long as it is strange. I'm a big fan of surrealism.

14. Any final words or thoughts?
14. Contact Exterminate the Brutes Records via email at ETBRecordings@Gmail.com
Stay on the lookout. This will not be the last time you hear this name. We are accepting demos at the time to boost our distribution and discography so if you have a project and need a label, we might be able to help you. This won't last so don't wait around. Join the Brute Squad today.
--Rob aka Brute A1a
Posted by OccultBlackMetal at 10:36 AM No comments: 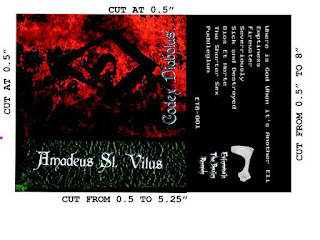 Amadeus St. Vitus are a band from Mississippi that plays a mixture of black metal, sludge metal and crust punk and this is a review of their 2009 album "Codex Diabolus" which was released by Exterminate The Brute Records.

Drums are mostly slow to mid paced beats with some fast playing as well as some occasional blast beats that sound very heavy and crushing while the bass playing sounds very powerful and is easy to hear despite having a raw production and it has a very powerful rhythm with some lead bass parts.

Guitars mixed elements of black metal, sludgy doom metal and crust punk together with a mixture of slow to fast riffs that are very heavy with some guitar leads that sound very distorted.

Vocals are a mixture of black metal screams and some screams that remind me of the legendary Acid Bath and some thrash style vocals, while the lyrics touch on humorous topics, as for the production it has a very raw feel but you can still hear all of the instruments.

In my opinion Amadeus St. Vitus are a very good band that sounds very underground and original, and if you are a fan of punk orientated sludgy metal with a black metal edge. RECOMMENDED TRACKS INCLUDE "Emptiness" "Severriously" "Sick and Destroyed" and "The Shorter Sex". RECOMMENDED BUY

https://www.soundclick.com/bands3/default.cfm?bandID=175235
Posted by OccultBlackMetal at 11:03 AM No comments: