The Hudson Horror is a melodic death metal band from New York City.  Marcus (Guitar) and I (Dan - Vox) started the group in 2011.  In late 2012/early 2013, we picked up Annie (Drums) and Tyreek (Bass) who both brought a whole new set of influences to the table.

2.So far you have released one ep and one full length, how would you describe the musical sound that is presented on both of the recordings and also how do they differ from each other?

Dark Compulsions is pretty much straight melodic death metal in terms of sound.  It was just Marcus and I on that one and our main goal was to write just that, aggressive melodic death metal.  When we recruited Annie and Tyreek, it meant more cooks in the kitchen in terms of the writing process.  The creative process for our full length, Nemesis, was very much a collaborative one.  As the band matured and we had more songs under our belt, we wanted to keep things interesting and began to incorporate more progressive, thrashy, and brutal vibes into the songs.  As such, Nemesis ended up being a much darker and fuller release than the Dark Compulsions EP was.

3.The new album is the first release to come out in 3 years, can you tell u a little bit more about what has been going on during that time frame?

As a band we’ve been spending a lot of time practicing, writing, and recording Nemesis.  We’ve played a good amount of shows within the New York metropolitan area as well.  The rhythm guitarist slot in our band has been somewhat of a revolving door, so we’ve unfortunately had to spend a bit of time ramping up new members.  Marcus and I both work pretty demanding jobs in the tech industry, while Annie and Tyreek are both in doctorate programs.  As a result, it took us a little longer than anticipated to put out Nemesis.

The lyrical content of Nemesis is heavily influenced by the works of H.P. Lovecraft, Isaac Asimov, and Clive Barker.  The most prominent theme throughout the album is cosmic horror and the notion that no matter what we do, humanity is just screwed.  There is also plenty of the gore, ghouls, and goblins side of things as well.  I’ve always been attracted to horror and the role it plays in metal, so for the most part The Hudson Horror stays true to conventional death metal themes.

5.What is the meaning and inspiration behind the name 'The Hudson Horror'?

The Hudson Horror is a direct reference to The Dunwich Horror by H.P. Lovecraft.  We thought it’d be cool to make the name geographically relevant and alliterative.  It was also the only name Marcus and I could agree on at the time, hah.

We have not played any particularly massive shows.  We’ve pretty much stuck to smaller to mid-sized venues.  I personally prefer playing in small bars where the crowd is right in your face.  It gets super intense and it’s really great seeing people react to your performance up close.

Instrumentally, we’re really tight.  Annie, Marcus, and Tyreek really click and when it’s show time they are just locked in.  As far as the vocals are concerned, things get pretty ferocious.  I grew up listening to hardcore punk and I’d say the performance reflects that.  I definitely kind of get lost in the moment and bug out.  We do our best to makes sure everyone who comes out gets their money’s worth and then some.

Ideally we’d like to branch out and do some more regional shows on the East Coast and see where else we can go with it.

It’s definitely something we would consider, but we haven’t had any offers yet.  The Hudson Horror is something we do not because we want to make it a career, but simply because we love playing metal.  That being said, if any label owners are reading this feel free to give me a call!

9.On a worldwide level how has the feedback been to your music by fans of extreme metal?

Overall, the reception has been really great.  People seem to be digging Nemesis and we couldn’t be happier.

Tyreek has a few side projects.  He is a member of The Sharp Eye Project (jazz), The Freedom Now Project (hip hop/jazz), and has his solo stuff as well.

I have two side projects that are still in their infancy- Douché Amoré (grindcore) and Atticism (melodic death metal).

I think we’re going to try to branch out a little more.  At the end of the day we will always be a melodic death metal band, but we want to see where we can go in terms of incorporating other styles into the mix.

We’re most heavily influenced by a lot of the 90’s/early 2000s melodic death metal bands like In Flames, At the Gates, Carcass, The Black Dahlia Murder, Scar Symmetry, etc.  There’s definitely brutal and blackened death metal influence in there as well.  A lot of people seem to reference Behemoth and Cannibal Corpse when talking about our riffs and the lower vocals.

As far as what we’re listening to now, we’re all over the place.  Every time I’m with Marcus he’s either rocking out to Plini or Wu-Tang.  I have been on a grindcore and New York hardcore kick for the past year or so.

I’d say as a band we’re really into physical fitness and technology.

Nope, that sums things up.  Thanks for the interview!

https://www.metal-archives.com/bands/The_Hudson_Horror/3540381376
Posted by OccultBlackMetal at 10:16 PM No comments: 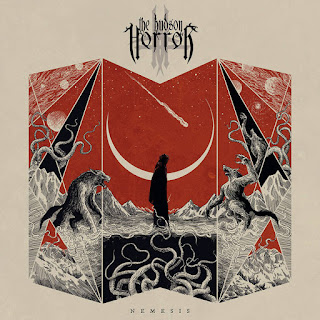 FACEBOOK »
BANDCAMP
Posted by OccultBlackMetal at 6:55 PM No comments: