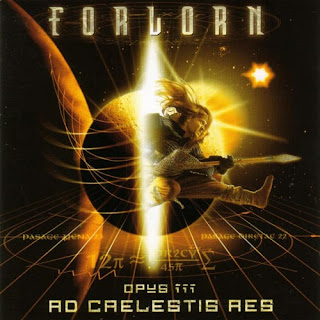 Forlorn are a band that started out as a more  folk orientated viking/black metal band but evolved into more of a symphonic black metal band with this release and this is a review of their 1999 album "Opus III: Ad Caekestis Res" which was released by Napalm Records.

Drums alternate between slow, mid paced to fast drumming with ablot of brutal blast beats, while the synths sound very dark, symphonic and atmospheric, as for the bass playing it has a very powerful and dark tone to it.

Rhythm guitars alternate between slow, mid paced to fast Norwegian style black metal guitar riffs that have a thrash edge to them at times, while the lead guitars are very melodic sounding guitar leads.

Vocals are mostly high pitched black metal screams with some clean singing vocals being thrown in at times, while the lyrics cover darkness, magick and the atmosphere, as for the production on this recording which was recorded between May and June of 1999 at Mansion Studios sounds very heavy and professional and you can hear all of the musical instruments that are present on this recording.

In my opinion Forlorn are a very good symphonic and melodic Norwegian black metal band and if you are a fan of this genre you should check this album out. RECOMMENDED TRACKS INCLUDE "Distant Worlds And Distant Moons" "Shadow Cult" and "Legends Of Creation". RECOMMENDED BUY.

https://www.metal-archives.com/bands/Forlorn/1376
Posted by OccultBlackMetal at 3:23 PM No comments: