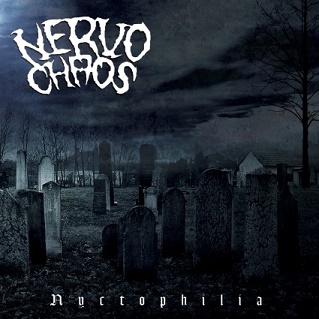 NervoChaos  creates  another  recording  that  remains  true  to  their  mixture  of   black  metal, doom,  death,  thrash  and  hardcore  punk  from  their  previous  releases,  the  production  sounds  very  professional  while  the  lyrics cover  Satanism,  Occultism,  Left  Hand  Path  and  Darkness  themes.

https://www.facebook.com/NervoChaos/
Posted by OccultBlackMetal at 4:32 PM No comments: 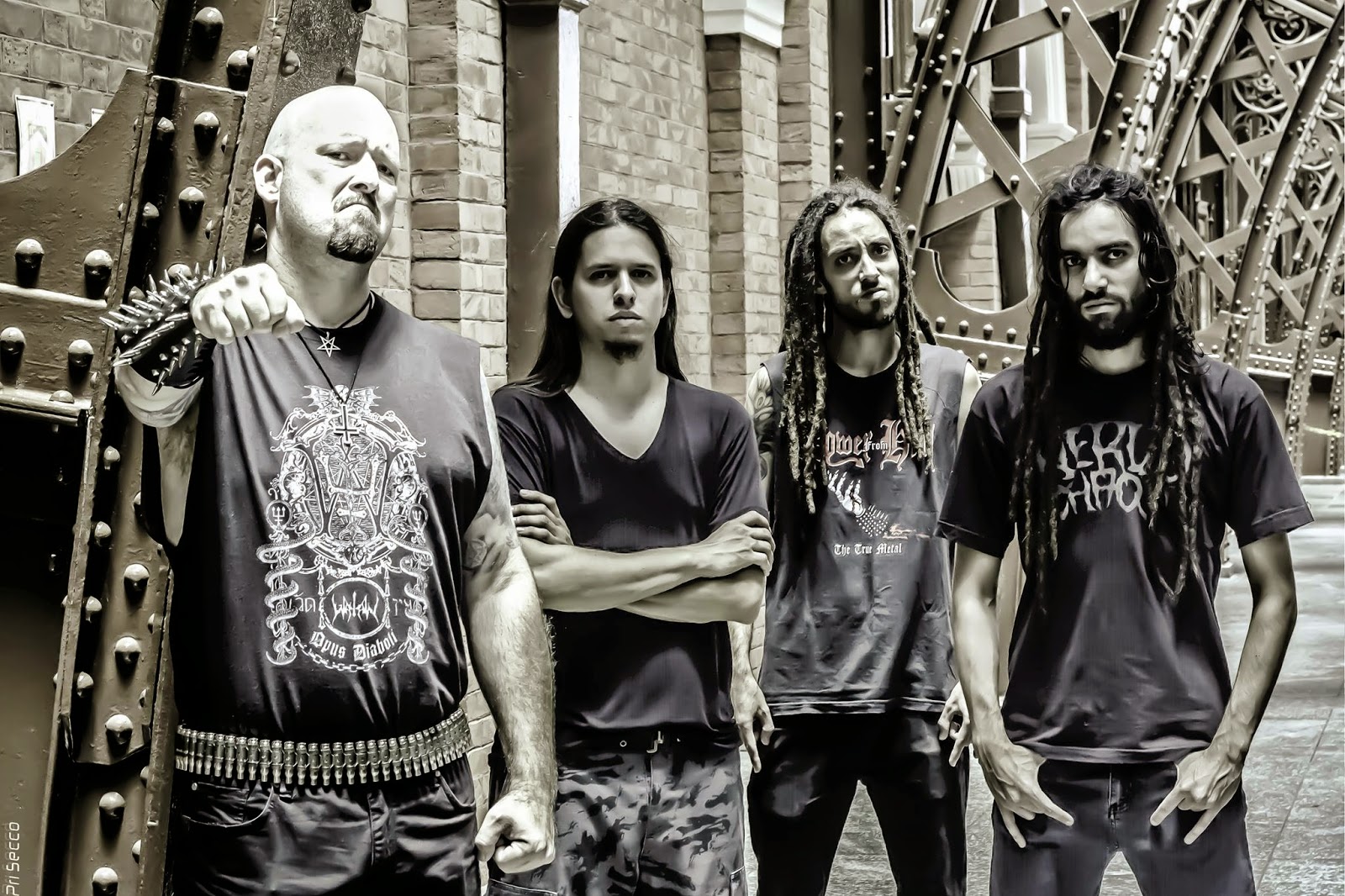 1.Can you give us an update on what has been going on with the band since the recording and release of the new album?
(Edu) Yes, we’ve started early this year our tour promoting the new release and so far we’ve reached Europe and South America. This year we’ll do 100 gigs and our plan is to continue touring in support of our new album until late next year. Also, we’ve released a new music video and we’re featured in two tribute CDs, one from HEADHUNTER DC and the other from STOMACHAL CORROSION.

2.You have a new album coming out in December, how would you describe the musical sound that is presented on the recording and also how does it differ from the stuff you have released in the past?
(Edu) In Brazil the album was released in April but in the US and Europe it will be out in December. I believe it’s our best release up to date. The new album is an natural evolution of our music and now that we have a solid line-up for a couple of years (which is awesome) we’re very tight and also mature as a band and as musicians. It’s the most diverse album we’ve released and we could explore different music styles ranging from traditional Death Metal to Thrash Metal, Black Metal and even some Doom Metal and Hard Core elements.  Also, it’s the first time we had a producer working with us on the whole process. We’re very pleased with the new album and the response we’re getting is extremely positive.

3.What are some of the lyrical topics and subjects the band explores with the newer music?
(Edu) We’ve always been a satanic/occult band but we do explore other topics as well. On the new album you can still find some satanic/anti-christian/occult themes but also topics about the harsh reality of our daily lives.

4.The band has been around for almost 20 years, what is it that keeps you motivated to create extreme metal after all of these years?
(Edu) I think when you do it for passion and not fashion it will last forever. We love what we do and we’re an underground band, so success for us is being active, touring and releasing albums. I think whatever you do in life, if you love it, if you have the passion it will last forever and there’s always motivation to continue with what you do.

5.What is the meaning and inspiration behind the name 'NervoChaos'?
(Edu) When we started the band we wanted a name that could be easily understood in English and Portuguese. Also, we wanted a name that was different from all the other bands that were around back then and a name that mixed both languages, Portuguese and English. The name also represents very well our music, our proposal and the city where we live in.

6.What are some of the best shows that the band has played over the years and also how would you describe your stage performance?
(Edu) It’s hard to choose just one or two shows once we’ve been touring since the band started. We believe that a true band is a band that’s not afraid of touring or performing live, so we think our highlight are our live performances. Our stage performance has to sound better than our albums and I think we have an intense, in your face stage performance. We did several memorable gigs and we had the opportunity to share the stage with great acts.

7.Do you have any touring or show plans once the new album is released?
(Edu) We had our first US tour booked for this year but due to the visas we couldn’t fulfill it. It has been re-scheduled for March 2015 and we hope we can get our visas this time to tour the US for the first time in our career. We did 100 gigs this year in support of the new album and we’ll continue touring until the end of 2015.

8.Over the years how has the feedback been to your music by fans of underground metal?
(Edu) The more we tour, the more often we release material, the better is the feedback. Also, our fan base is growing worldwide and the sales are growing as well. I think that’s the best response we could have from it.

9.Where do you see the band heading into musically during the future?
(Edu) I hope our line-up keeps steady so we can continue with our musical evolution. We only do what we like as a band and we’re always trying to evolve but keeping true to our proposal. Our idea is to continue touring and releasing albums frequently. Every new album we release we always try to beat our previous release. We’ll continue doing extreme music without being attached to this or that music label.

10.What are some of the bands or musical styles that have had an influence on your newer music and also what are you listening to nowadays?
(Edu) We have a lot of different influences in our music, it ranges from Black Sabbath to Napalm Death or from Judas Priest to Cannibal Corpse. I could mention acts such as D.R.I., The Accused, R.D.P., old Sepultura, Death, Obituary, Benediction, Dismember, Incantation and many more to list. I still listen to the ‘classic’ albums from bands like Slayer, Iron Maiden, Sepultura, Sarcofago, Mercyful Fate, Dissection, Possessed, Dark Angel, Sadus and etc.

11.How would you describe your views on Satanism and Occultism?
(Edu) I’m into the Left-hand Path, Chaosophy, Chaos-Gnostic Satanism and The Cult of Death. All this is highly mixture with the Brazilian culture (since the Guarani and Tupi Indians) and with the afro-brazilian religion such as Quimbanda and Macumba. Occultism is the knowledge of the paranormal and it’s not for everybody, it must be kept hidden.

12.What are some of your non musical interests?
(Edu) I love history in general, but mainly old civilizations and wars. I’m a big movie fan, I’m also deep into video games, books and weed smoking. I love traveling around and also spending time with my son.

13.Before we wrap up this interview, do you have any final words or thoughts?
(Edu) Thanks a lot for such an interesting interview and I hope we can tour the US soon. Keep up the good work and stay fuckin METAL! Visitwww.nervochaos.com.br and we you all on the road!
www.greyhazerecords.com

Posted by OccultBlackMetal at 4:22 PM No comments: 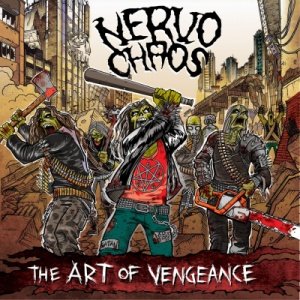 Posted by OccultBlackMetal at 7:00 PM No comments: