The album is out in just a few days, so we are just working on wrapping up a few things before it is unleashed upon the world. Shipping packages, etc.

The new album Astral Necromancy might be described as melodic black metal, but I think we have a lot of other influences that come through with folky passages and more atmospheric stuff. We definitely like a good melody as sort of the common thread through a song. I’d say the new album is more thorough and consistent than past work and I think we have honed in even more on the type of sound we really want to capture.

3.This is the first album to be released in 4 years, can you tell us a little bit more about what has been going on during that time span?

Some of the first demo ideas for this album were recorded all the way back in 2015. Expanding on these and sculpting them into something we feel represents our ideas takes a lot of time. We got together weekly for nearly 4 years to workshop ideas and themes and figure out how to put them all together. It was a process that saw a lot of ideas completely scrapped - but I think it was all worth it.

Additionally, we got new equipment to create the music. Purchasing a new guitar about a year ago meant we had to re-record basically all of the songs, but once again, it was very much worth it. To hear the original demos to the final version is night and day.

4.The lyrics on the new recording is a concept based around Occultism, can you tell us a little bit more about the songwriting and also your interest in the occult?

We developed a concept over time of occult black magic, but with the source of that power emanating from beyond the earth. Somewhere out in the cosmos is the source of that power, and to think such a power could be drawn from our puny world is ignorant. Out in the vast darkness of space is a power that can be drawn upon, but with all things it costs a considerable price. Learning these occult secrets can grant immortality and great power, but it rots the flesh and corrupts the soul. To protect oneself from the putrid side effects of this costly power, there are other rituals, pacts to be made, that can secure your essence beyond the realm of death - at least for a time being.

The occult was a natural place for us to go with our interest in space. We read a deal about black holes, dark energy, but also old grimoires written in centuries past by people who practiced necromancy. These two concepts were married together in the creation of Astral Necromancy.

5.The bands name came from "Star Wars' and the earlier material was more sci-fi themed, what was the decision to move away from that topic on the new recording?

Hoth was originally chosen as our name because it was a planet covered in snow and ice. It sort of represented to us a sort of Niflheim - this realm of cold that embodies a primordial force. The name is also short and sweet, and rolls off the tongue quite well. Our first demos and Infinite Darkness were sort of the natural starting point for us after picking a name. It was easy to write lyrics and have fun recording, but eventually we started to take a more serious look at what kind of themes we wanted to explore. Our interest in the occult really started with Oathbreaker which is the story of someone sacrificing themselves and everything they believe in for a forbidden power in the vain hope to cheat death. Themes of necromancy are present in that album. Different people listening to it will imagine a different story in their heads, which was intentional. Some people see Star Wars, others imagine other stories, because the tale of corruption is a timeless one and your interpretation is based on your own life experiences and is probably just as valid as anyone else’s. I had also begun reading about the occult, specifically necromancy, for another side project I was working on, so that also influenced the new material. So based on this theme of necromancy we began in Oathbreaker, Astral Necromancy was the natural next step - to really look at the spells and rituals of black magic and to see what they mean. Overall, we are organic. We grow and change and evolve. Who knows what direction our future musical efforts will take us?

6.Currently there are only 2 members in the band, are you open to expanding your line up or do you prefer to remain a duo?

We will remain a duo.

7.The new album was released on 'Epicurus Records', can you tell us a little bit more about this label?

Epicurus is a small micro-label in Seattle doing only select musical projects from Seattle-based artists.

8.On a worldwide level how has the feedback been to your music by fans of melodic black and death metal?

People seem to like us for the most part. I hope this new album doesn’t disappoint.

We both have a few music side projects. Nothing incredibly active as of now. All the focus has been on completing and releasing Astral Necromancy. Maybe we’ll get back into some of our personal projects once the album is out.

Hard to say - only time will tell! We haven’t even started to think about our next album, but we want to continue to have very narrative-driven albums, not necessarily concepts – but albums that conjure mental pictures with the listener. That have songs that can stand alone and as a whole- create a listening experience.

Influential bands for us are Windir, Dissection, Emperor, Enslaved, Immortal, Moonsorrow and many others. We love that mix of black metal with subtle folk elements, though I personally enjoy the cheesier stuff as well. Anything with good production and a focus on enchanting melodies is fun. Recently I have been listening to a lot of Visigoth, Aorlhac, Panopticon, and a bunch of random black metal solo projects I stumble onto on youtube or bandcamp.

We are into the outdoors, hiking, etc. We both like playing video games. David has been into the new Zelda, and I’ve been playing working through another playthrough of The Witcher 3. We are also both into craft beer, which Seattle is great for.

Thanks for taking the time to read this! Go check out Astral Necromancy which will be out worldwide on June 15th. Stay tuned for more info about what we plan to do next!

Posted by OccultBlackMetal at 9:24 PM No comments: 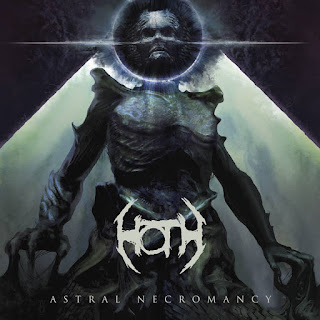 Hoth  plays  a  musical  style  that  takes  the  melodic  sides  of  black  and  death  metal  and  mixes  them  together  to  create  a  sound  of  their  own,  the  production  sounds  very  professional  while  the  lyrics  are  a  concept  album  based  upon  Black  Magick,  Necromancy,  Forbidden  Knowledge  and  Spiritual  Transcendence.