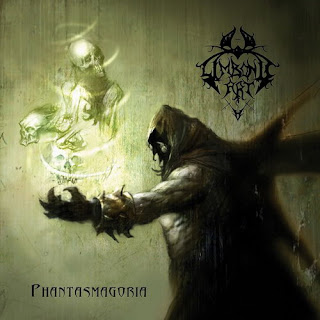 Limbonic Art are a band from Norway that has been around since the 1990's that play a very atmospheric and symphonic form of black metal and this is a review of their 2010 album "Phantasmogoria" which will be released by Candlelight Records.

Drum programming is mostly fast and brutal with a lot of devastating blast beats being thrown in and they slow down at times to give the music a darker edge, while the keyboards are very symphonic, ambient, epic and atmospheric, as for the bass playing it has a very dark tone that follows the riffs that are coming out of the guitars.

Rhythm guitars are mostly fast black metal riffs that contain some melody and the riffs get slower at times with some thrash and traditional metal influences, while the lead guitars are very melodic sounding guitar solos that contain a lot of skill when they are utilized.

Vocals are high pitched black metal screams with some clean singing being thrown in at times as well as some deep death metal growls, while the lyrics cover death, darkness, necromancy, astral projection and other occult themes, as for the production of this album it sounds very powerful and professional with all of the musical instruments having a heavy sound.

IN my opinion this is another good album from Limbonic Art and this is their heaviest album to date and if you where a fan of their past albums you will not be disappointed. RECOMMENDED TRACKS INCLUDE "Curse Of The Necromancer" "Portal To The Unknown" "Prophetic Dreams" and "Astral Projection". RECOMMENDED BUY

Posted by OccultBlackMetal at 1:21 PM No comments: