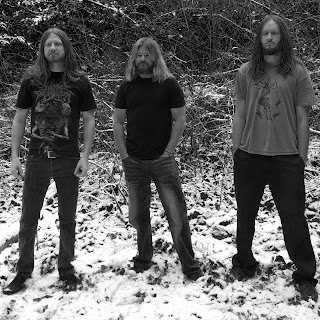 All Answers by Bassist Kevin Carbrey

Hello!  The band is currently preparing for the release of its first full-length album on June 9th.  It’s been in process for the last 2 to 3 years, so after a few celebrations locally with our friends and family, we’re planning on a taking a little time off in the summer before reconvening to prepare for a fall tour.

2. You have a new album coming out in June, how would you describe the musical sound that is presented on the recording and also how does it differ from the stuff you have released in the past?

We released our first EP, “As Beauty Fades Away”, in 2015, which represented an earlier incarnation of the band with original drummer Josh Keifer.  Those songs were a little bit different tonally than the ones on the full-length.  A little darker perhaps, and we were limited to the production value we could achieve in our basement studio.

This album is significantly more dynamic, not only in the songwriting, but in the overall sound as well.  We were also fortunate to record, mix and master with some of the best names in metal, and that significantly improved the production of the tracks.  I think the album really captures everything we were attempting to achieve from a musical and technical perspective, without losing any of the soul we find in the songs.

3. What are some of the lyrical topics and subjects the band explores with the newer music?

The lyrics really represent our observations of what we see going on around us right now.  It wasn’t intended to be a concept album, however, the lyrical themes, album imagery, and album/band name are all closely related.  I prefer to let the listener explore the lyrical themes without influence, but I definitely think that all of the parts are necessary to see the view from our eyes.  Taken individually, the music, lyrics, band name and imagery only tell part of the story.  I think consideration of each of those elements will show a pretty clear, poignant picture.

4. What is the meaning and inspiration behind the name 'A Flourishing Scourge'?

In every aspect of life, there seems to be a parasite that always takes way more than it contributes.  Each of us seem to define what the scourge is in our individual lives a little bit differently, so we like that the name, album, and lyrical content are all subject to interpretation.


5. What are some of the best shows that the band has played so far and also how would you describe your stage performance?

We really try to bring a dynamic, immersive experience to our live shows.  We incorporate our own lights, fog and other visual aspects to accentuate the music, allowing us to kind of manipulate the atmosphere at a venue, regardless of its size.  We want the music and visuals to be the stars of the show and do our best to stay out of the way.  We were on tour last fall and one of my favorite shows was at Rock City Studios in California.  Great venue and a cool group of bands and fans and there was a really palpable energy that night.  Fortunately we were able to record that show in its entirety, and it’s currently up on our YouTube page.  The kick-off show for that tour was with Kataklysm in Seattle, so we had our home town crowd there to send us off, and that was a really fun show where the sound and lights happened to be almost perfect, which is always a bit of a miracle.

6. Do you have any touring or show plans once the new album is released?

Absolutely!  We’re going to take a few weeks off this summer to relax a bit after spending the last two sequestered in our basement.  After that, we’ll begin rehearsals for a fall tour, which will probably kick off during mid to late September.   We’ll probably begin with a short 10 – 12 date tour in the fall, and will then look to do something similar again in early 2018.

7. The new album is coming out on the bands own label, are you open to working with a different label in the future?

Sure, provided their goals and vision for the band were in line with our own.  We are intending to shop this album to some of the like-minded labels we’ve enjoyed over the years in order to seek out distribution, booking and tour support partnerships that make sense during this very strange period in the music industry.

8. On a worldwide level how has the feedback been to your music by fans of black, death and progressive metal?

It has really been received well.  I’m a little older, so I grew up before the splintering of all the genres.  Metal was metal.   I like that our sound is very diverse and has so many different elements and influences.  Typically we’re told by listeners that they can always find elements of our songs that resonate with them, regardless of their background or musical tendencies and I would like to think that we could offer something that transcends genre boundaries while still doing the individual influences justice.

We are definitely intending on stepping out of our comfort zone for the next album.  This album, like so many other debuts, took years to make, and the songs were literally in-process the whole time.  Most of them were already fairly developed concepts arranged by Tye, the singer/guitarist, before the band was fully formed.  So, this time, writing will be a much more collaborative, from-scratch approach, that will probably yield some new twists.  Also, being fans of progressive music and the long-form musical piece, the next album is going to be a more deliberate concept album, as opposed to A Flourishing Scourge which is merely tied thematically.

We’ll all have very varied influences, however ‘80’s thrash seems to be what got all of us into playing music.  I’m very into prog music in general, be it Opeth, Tool or early Genesis.  The other guys are more into the black and death metal side of the house, however we’ll listen to everything from Fleshgod Apocalypse to Michael Jackson depending on the day.  As far as what I’m listening to, I’m digging the new Pillorian and Anciients albums, as well as getting into some Norwegian folk metal, with bands like Wardruna.  Other than that, my main stable of prog and metal are always on constant rotation.

11. What are some of your nonmusical interests?

Being from Seattle, we’re all Seahawks fans.  We love to have Game of Thrones dinner parties.  We go to tons of shows either to support of friends or dig on someone we like.  We’re all interested in traveling and spending time with our families, so we’re going to take a little time this summer to do that before we get rolling again this fall.

12. Before we wrap up this interview, do you have any final words or thoughts?
The album will be released on June 9th, but is currently available for pre-order from Bandcamp.
https://aflourishingscourge.bandcamp.com/album/a-flourishing-scourge

Also, please check in on us on Facebook (www.facebook.com/aflourishingscourge) and our webpage, www.afloursihingscourge.com.
Metal was borne and lives today on the backs of the bloggers, writers, zines and power of the individual fan, and we are very appreciate of your support.  Thank you!

Posted by OccultBlackMetal at 4:46 PM No comments: 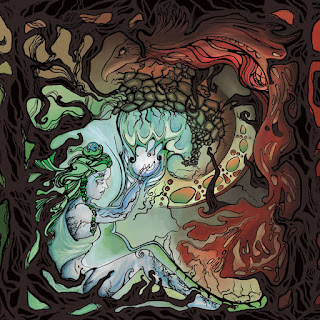 A  Flourishing  Scourge  plays  a  musical  style  that  takes  melodic  black  and  death  metal  and  mixes  them  in  with  a  great  amount  of  progressive  elements  to  create  something  very  different,  the  production  sounds  very  professional  while  the  lyrics  cover  dark  themes.

http://www.aflourishingscourge.com/
Posted by OccultBlackMetal at 8:43 PM No comments: