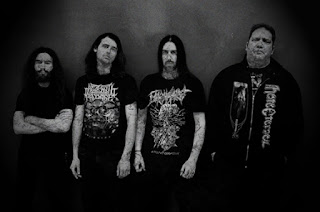 We have been rehearsing for shows and getting tour plans together for a run late this year and of course March and all the associative things.

2.You have a new album coming out in October, what are some of the things you have done differently musically on this recording that you where not able to do with your previous releases? We got bigger sound took longer to write songs and we also got to have female vocals which I always wanted to do on a track as well as Ryan and I wrote more together than previous records.  Production slays too.

3.The lyrics on the new recording are a concept album, can you tell us a little bit more about the story you explore with this new release?  The concept is dual purpose artificial intelligence and creating synthetic life forms that are of course enslaved by humanity but of course break those shackles and rebel.  Not a terribly original concept but one I have wanted to explore in my own words for a long time musically with this band.

4.What is the meaning and inspiration behind the name 'Solium Fatalis'?  It’s late for Fated or Deadly Throne which later I was informed by more educated people than myself was improper use of Latin but I told them they’ll get over it.

5.Can you tell us a little bit more about the artwork that is presented on the new album cover?  Pierre-Alain D. Of 3mmi had been our art guy for the last 3 albums and had created this piece specifically centered around the music and concepts and is a visual sort of representation of its content.

6.What are some of the best shows that the band has played over the years and also how would you describe your stage performance?  Our stage performance is heavy and powerful and is something to see.  We sound like our records and it certainly isn’t boring for us when we have that high energy fan base out there ripping with us.  I think our favorites have been Saint Vitus in Brooklyn, Piranha Bar in Montreal, and my personal fave was Brattleboro Vermont at the Stone Church, crowd was insane and he sound was massive.

7.Do you have any touring or show plans once the new album is released?  Absolutely but those are top secret for now....for some fuckin reason.

8.On the new album you had some quests, can you tell us who they are and also their contributions onto the recording?  Matt McGachy of Cryptopsy and Haydee Irizarry of Aversed and Carnivora contributed vocals to “A Gathering of Storms” which for me as a writer is one of my finest accomplishments conceptually so I’m proud of that song, Matt also belted our a huge scream on “Factor Red.”  Phil Tougas of Chtheilist and First Fragment lent a solo to “Fiery the Angels Fell” so it was killer to have them on board.

9.The last 2 albums where released on 'Wicked Music Records', can you tell us a little bit more about this label?  The last one was Wicked Music and the one before(undying season) was Galy Records.  Wicked was an upstart label at the time and is now defunct.  Galy was a sort of experiment that failed as well.  So now we are putting this next record out on our own label “Disfigured Records” and looking to sign some other bands and do the same rather than pander to some stupid ass record label popularity contest.

10.On a worldwide level how has the reaction been to your music by fans of black and death metal?  It’s been 99% bad ass as fuck.  They have eaten this up especially at our shows and we love them it.  Our fans shred.  We have had a few “reviews” that weren’t particularly favorable but opinion is the lowest form of knowledge and doesn’t require fact, information or even truth.  You’re better off thinking for yourself.

11.On the new album you had also done an 'Epidemic' cover, what was the decision behind doing your own version of one of their songs?  That’s a very personal thing for me, I grew up in the middle of nowhere in Iowa and Epidemic’s “Decameron” was such a huge influence on me and I never felt they got their due.... plus I love “Factor Red” and knew this band could do our own version and make it Brutal.   More than anything I hope the members of Epidemic and their fans like it,  cuz we loved playing it.

12.What is going on with some of the other bands or musical projects these days that some of the band members are a part of?  Ryan plays Unflesh and they just put out a killer album called “Savior” Jeff our drummer does Aversed and they are currently writing and recording their first full length album, and Jeff Demarco has been working with his band Excrecor for the last 27 years writing, re-writing, and writing again their 2nd full length album so expect that one to come out around the year 10,191 so the folks of Arrakis also known as Dune, Fremen, Harkonnen, and Atreides alike can come together and enjoy that.

13.Where do you see the band heading into musically during the future?  I think we are always pretty diverse and we are probably going to be more experimental and use a theramin and maybe some kazoos....have some babies screaming so it sounds like you’re in hell itself.  But really just play the best heavy shit we can.

14.What are some of the bands or musical styles that have had an influence on your music and also what are you listening to nowadays?
So many, myself I love Paradise Lost, Lago is a good one I crank now,  new Necrophobic is really fuckin good.  Our friends in Cryptopsy always influence us with their intensity and how bad ass they are live.  Whore of Bethlehem put out a killer album too.  So many great bands worth hearing.

15.What are some of your non musical interests?  Demarco loves flying and traveling unless he has to drive a large van, then be crumbles and has a nervous breakdown.  Saltzman is the same he loves to travel  and getting a face full of Teargas at anti-Trump rallies.  Ryan and I are the most boring we like cranking records, drinking beer, and making prank phone calls and pulling stunts on our friends.....like signing them up for Scientology.

16.Before we wrap up this interview, do you have any final words or thoughts?  I just wanted to say CUNT because I got all the other good cuss words in this interview previously.  Also thanks to the fine folks of high quality taste for buying our music and merch.  Also thanks for giving us the rub with this interview that’s bad ass.

Posted by OccultBlackMetal at 7:18 PM No comments: 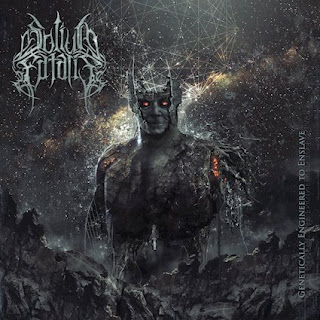 Solium  Fatalis  plays  a  musical  style  that  takes  melodic  black  metal  and  mixes  it  with  death  metal  to  create  a  sound  of  their  own,  the  production  sounds  very  professional  while  the  lyrics  are  a  concept  album  based  upon  genetic  engineering  and  artificial  intelligence.

Posted by OccultBlackMetal at 8:23 PM No comments: