1.Can you give us an update on what is going on with the band these days?
Hi, actually we are looking for a new guitarist becouse our bandmate Rob left the band 2 month ago, then we will promote Totenamt with concerts.

2.Recently you have released a new album how would you describe the musical sound that is presented on the recording and also how does it differ from the stuff you have released in the past?
Sound in new album it' s more various and complex and difference with old discography it' s basically in more influences outside metal and better arrangiament on it.

3.The band has been around since 1995 but only has released 3 full lengths, can you tell us a little bit more about the gaps in between releases?
Is it true, our production it's pretty slow, we prefer to publish our music when we are ready, we have work on Totenamt for 7 years and specially in that case, we have had personal problems that slow down us.

4.What are some of the lyrical topics and subjects the band explores with the newer music?
In that album we talk about Death, all songs are poems wrote by me almost 10 years ago. I explore death in all his shades and it is a sad album of course.

5.What is the meaning and inspiration behind the name 'And harmony Dies'?
20 years ago we were looking for a band name that include peace, wellness and at the same time something dark and we were fans of Venom, so listening to the album Possessed we focus our attention at the song title Harmony Dies. it became our first name, then we discovered that another band from Germany had the same name, but we were already active and known in our region, so we decided to add "AND" at the beginning, so it become And Harmony Dies.

6.What are some of the best shows that the band has played over the years and also how would you describe your stage performance?
I remember a great show in a club in 2005 there was a lot of people and all have fun. It was a great show! With the passing of years we decided to focus more of theatrical immaginary instead of metal impact. We are trying to focus more on songs' s feeling not only in anger given by metal parts.

7.Do you have any touring or show plans for the new album?
Actually not because of our guitarist search.

8.The new album was released on Sliptrick Records, are you happy with the support that they have given you so far?
Yes they are very professional and working really good.

9.On a worldwide level how has the feedback been to your music by fans of black and avant garde metal?
Actually responses are good and we are proud of it Black metal fans still looking to more classical proposal, but people more open minded really like it!

10.Are any of the band members also involved with any other bands or musical projects these days?
Yes me (Black). I have other project like Pesten and Lux Eternæ but And Harmony Dies still my priority.

11.Where do you see the band heading into musically during the future?
Nobady really knows where new songs will arrive. We still listening a lot genres and we will never repeat ourselves.

12.What are some of the bands or musical styles that have had an influence on your newer music and also what are you listening to nowadays?
In metal absolutelly Devin Townsend, Arcturus, DHG, Mayhem, Phil Anselmo and the illegals. Outside metal, Asaf Avidan, Lord buffalo, Le trio Joubran and many many more.

14.Before we wrap up this interview, do you have any final words or thoughts?
Thank for your interesting, we want to let people crush their musical tastes. There are a lot of good music outside and people are afraid often to discover new one. Life contains a multitude of feelings, that sometimes change quickly. This is our music. Enjoy it!

Posted by OccultBlackMetal at 3:55 AM No comments: 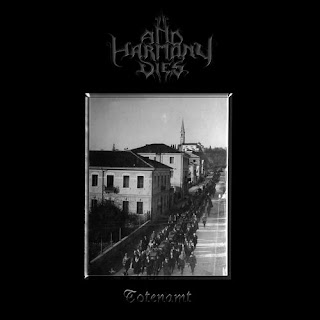 Nature  sounds  start  off  the  album  along  with  soem  church bells  before  going  into  more  of  an  avant  garde  direction  which  also  shows  violins  being  added  onto  the  recording  and  after  awhile  it  starts  to  mix  in  with  a  heavier  sound  which  also introduces  grim  black  metal  screams  onto  the  recording  along  with  some  symphonic  elements.

And  Harmony  Dies  plays  a  style  of  black  metal  that  is  very  avant  garde  and  incorporates  many  elements  from  many  different  musical  genres,  to  create  something  very  original,  the  production  sounds  very  professional  while  the  lyrics  cover  suffering  and  agonizing  themes.