We (STORMTIDE) are a symphonic fantasy/death metal band from a little country known to some as Australia. To others, “Down Under”. Having been hard at work these past three and a bit years on our debut album “Wrath of an Empire” we are finally ready to release through the awesome Metal Hell Records.

A fusion. We’ve worked tirelessly to blend together our favourite genres combining black, death, symphonic and folk metals to create something entirely new. Or at least we hope that’s what we’ve done!

3.Your lyrics cover a lot of High Fantasy themes, can you tell us a little bit more about your interest in this topic?

4.What is the meaning and inspiration behind the name 'Stormtide'?

That’s a good question! It came to us after a few failed (and hilarious) attempts at creating a name. It seemed to just fit.

We try and make each show as important and as exciting as the last. We’ve had the opportunity to play packed capacity venues supporting our favourite bands as well as playing to a few angry football fans at our local. Our stage performance is the same regardless – Cloaked, furious and fun.

Can’t say too much to that just yet, let’s just say some things are in the works!

7.The new album is coming out on 'Metal Hell Records', can you tell us a little bit more about this label?

Metal Hell have been really great to work with. They gave us a really great opportunity to promote the kind of music that most mainstream labels wouldn’t take a chance on.

8.On a worldwide level how has the feedback been to your music by fans of extreme metal?

Feedback has been overwhelmingly positive these past few years. We have fans all over the world who regularly message us asking for updates, merch and when we’ll be touring to their country!

It’s becoming a bit of a cliché to say “heavier and darker” about future music these days. We’re just aiming for “Better”!

Our influences range from old school black metal to epic symphonic metal. Our favourite bands are along the lines of Insomnium, Equilibrium and Wintersun.

11.Does Paganism play any role in your music?

Not so much! We try and avoid any religious overtones in our music.

13.Before we wrap up this interview, do you have any final words or thoughts?
We look forward to seeing what people say regarding this new album!

Posted by OccultBlackMetal at 6:51 AM No comments: 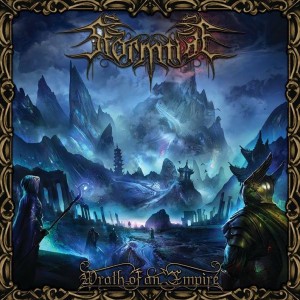 A  very  heavy  and  symphonic  sound  starts  off  the  album  along  with  some  choir  vocals  which  also  gives  the  music  more  of  an  epic  atmosphere  and  all  of  the  musical  instruments  sound  very  powerful  and  after  awhile  death  metal  growls  make  their  presence  known  on  the  recording  while the  riffs  also  use  a  decent  amount  of  melody.

Stormtide  plays  a  musical  style  that  takes  symphonic  and  melodic  death  metal  and  mixes  it  in  with  elements  of  folk  and  black  metal  to  create  a  sound  of  their  own,  the  production  sounds  very  professional  while  the  lyrics  cover  fantasy  themes.