Mr.Styx: Bloody Terror is an international black/death metal band created in late 2010. The very first record was the cover of Kalmah's song named “Dance Of The Water”.
After this we started to compose the material for debut album. At the same time Dr.Trajan has joined the band as a bass player. During the 18 months the first album was in process.
Debut full-length album "Shadow Of Death" out 15/09/2012 on a various labels.
In early 2013 Dr.Trajan was replaced by Brutal Baphomet on bass/back vocals. With a new line-up we started to compose the very new material for the sophomore album that was finished in august 2014.
Fall of 2014 we signed a contract with Metal Scrap Records. Our second full-length album, "Diaboli Celeritate", was released on November 14, 2014 as a digital edition. On CD album planned to release in 2015.

PS: When we record our first album mainly I wrote all the lyrics.
Some of them were like joke, some of them sarcastic. But when Brutal Baphomet joined the band he brought dark atmosphere to our band from his occult ideas for lyrics and we have left from humorous lyrics to more serious occult topics.

4.What is the meaning and inspiration behind the name 'Bloody Terror?

PS: Back in 2011 when we`ve started to record our debut album we simply searched for the name that has not yet been used by other bands but represents our style and atmosphere. Mr Styx suggest Bloody Terror, and it was exactly what we needed!

5.The band members are both from Ukraine and Russia, how does this work in the recording process?

MS: We collaborate through Internet - recording all stuff in our studios and sending it to each other.

6.Has the band done any live shows or is this studio project?

MS: We`re apart by the thousands of kilometers, perhaps, we`d like to perform a live but still we don`t have such chance yet. That`s the reason why this is a studio project for now.

PS: We have proposals from few festivals to play live. It's possible and very interesting, but we need time & money to meet each other while, as we are now busy with our main bands. Only time will tell .. ;)

7.On a worldwide level how has the feedback been to your music by fans of black an death metal?

MS: Quite positive. The second album attracted great interest among the metalheads than debut record.

MS: I have my own solo project named Metal Styx, symphonic folk metal. At late spring of 2014 the EP "Curuvar Firtalion" was out. Also Brutal Baphomet has his own band Evilgod,in whin I`m a bass-player.About a 2 months ago we had our the very first live. Perhaps, we`ll start to make the third album soon.

PS: I'm a guitarist of Ukrainian metal band Majesty Of Revival. Sometimes I playing with other bands as a session guitarist/drummer. Also I released few solo-albums under the name "PowerSquad".

PS: We have a lot ideas for future records but now we cant say more about this, because our second album was out only few weeks ago as a digital edition, and planned to release on CD in early 2015. Also we hope that someday we will toured with this band.

11.Does Occultism play any role in your music?

Brutal Baphomet: UNDOUBTEDLY OCCULTISM play a certain role. Without him we wouldn't have been a black metal band.

Thanks for interesting questions. We hope that you like our new album. Thanks all fans around the world for great feedbacks and support. Metal is forever \m/

Posted by OccultBlackMetal at 10:00 PM No comments: 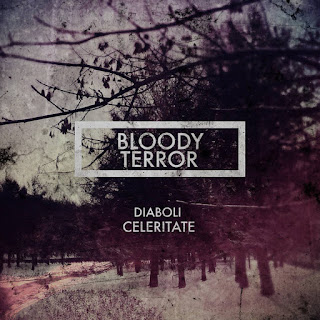 Bloody Terror  takes  a  90's  style  of  symphonic  black  metal  and  mixes  it  with  the  more  modern  melodic  death  metal  sound  to  update  this  genre  for  the  modern  day,  the  production  sounds  very  professional  while  the  lyrics  cover  darkness  and  occult  themes.