We started in the end of 2012, as friends playing death metal, inspired by bands like Morbid Angel, Autopsy. Since that we became brothers with an idea of spreading blasphemy, influenced by black art. Now we are 19-23 y.o. maybe that’s not impressive, but whatever, we have own vision  of what happens with the world and humanity. We came from little towns in central Poland, so you can only imagine the atmosphere of our lives. But back to the main theme, since we brought band to live, we recorded some stuff and play few concerts, sometimes in dirty caves, sometimes in big halls (for example on tour with Infernal War).

2.Recently you have released your first full length, how would you describe the musical sound that is presented on the recording and also how does it differ from your previous ep and demo?
There’s more black metal influence on it. The dark atmosphere of solitude and being forgotten by god weeps from our tools of doom. We’re not playing in the same pulse all the time, because it’s like a story to tell, sometimes there’s fast blast beats fueled by hate and aggression, sometimes very slow, powerful acts of doom. The album is more consequent and coherent. Definitely it’s more mature, but it’s only early phase of what’s inside us, time will show, because even we don’t know where this path is going. Or we know – into death and nothingness, but what’s en route?

3.Your lyrics cover a great amount of occult and left hand path topics, can you tell us a little bit more about your interest in the dark arts?

I recommend to research it on your own, because that knowledge is only for chosen ones, those who really are interest, but the fact is that evilness is around us. Only fools wouldn’t agree, and the thing is to be able to live in this society. Sometimes we create it and hurts each others, sometimes we’re on the way with it, watching the great misterium of downfall of our times, sometimes we fall under our own weakness, but when the black flame of Lucifer’s illumination is burning inside we’re able to rejecting lies. The truth is subjective nowadays, so we’re still looking for real liberty, against the god law. It appears in our everyday life's as attitude, but also I celebrate it during special dates, or in special places, practicing some kind of rituals. There’s only death real in this world.

4.Why did you pick the name 'Morthus' and also are you aware of the band in Germany that also has the same name?

It cames from “Mortuus” – in latin it means dead. Short name, easy to remember, that’s all. When we choose it, we only knew about Czech Morthus playing dark ambient or something, but we’re not interested in this kind of music. After that we discover the band from Germany, they play quite good, but there’s no devil in their music, so we’re also not interested.

It sucks when you have to read or talk about shows. And it’s hard to describe in few words. Wildness, aggression, hate and dignity – this ones are good.

Yes, but only during the winter. We confirmed 2 gigs with Mayhem and Watain during their tour in Europe, both in Poland, and also one festival with Grave Miasma and Sadistic Intent in Poland too.

7.The new album was released on Witching Hour productions, are you happy with the support that they have given you so far?

It’s hard to say, we’re young so we don’t know how this big mechanism works, they helped us with a lot of things, but some things weren’t done as we would do it, or some topics were without answers for long time but it’s only details.  Finally we are glad, because they do the great physical version of the album and the promotion. It’s one of the biggest labels in Poland so it would be stupid to reject their proposition.

We have good response from places we hadn’t expected like Singapore, Chille, Brasil, Nepal, Serbia. There’s a lot of reviews from US or UK and of course from Europe - Spain, Portugal, France, and our neighbours: Germany, Czech Republic (see u at Brutal Assault) but it’s quite obviously.

All the music we listen to had an influence, there’s no one particular band. Of course mostly it’s Scandinavian scene, but also American. Nowdays we listen to oldschool stuff (Bathory!!), but sometimes we are bewitched by younger bands. I recommend stuff from Poland like Bestial Raids, Cultes des Ghoules, Mgła, Infernal War and others. Also I can name few bands which I mostly listen to for a few months (I don’t say that I’ve just know them, but they are in my top bands now): Teitanblood, Truppensturm, Darkthrone, Degial, Bombus, Wardruna, King Dude, Diocletian and Witchrist and many more

11.What are some of your non musical interests?
Sex and drugs.
12.Before we wrap up this interview, do you have any final words or thoughts?

Posted by OccultBlackMetal at 3:51 PM No comments: 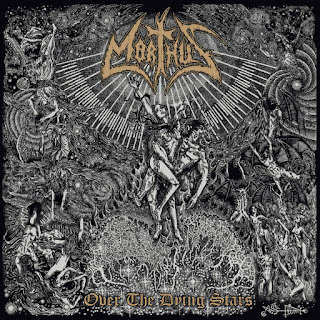