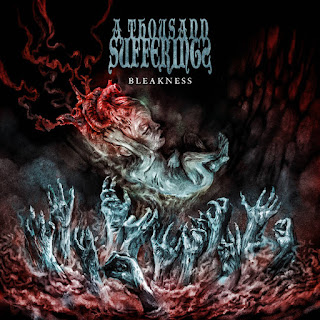 Atmospheric  sounding  synths  start  off  the  album  before  going  into  a  heavier  direction  which  also  introduces  melodic  riffing  onto  the  recording  while  some  of  the  tracks  are  very  long  and  epic  in  length  along  with  the  vocals  bringing  in  more  of  an  aggressive  shouting  style  and  the  solos  and  leads  also  bring  in  a  great  amount  of  melody.

On  this  recording  A  Thousand  Sufferings  remains  true  to  their  mixture  of  black,  doom  and  sludge  metal,  the  production  sounds  very  professional  while  the  lyrics  cover  dark  and  negative  themes.

Posted by OccultBlackMetal at 12:57 PM No comments:

We started from the ashes of Vex (Pj and I used to be in this band and we released one album via German label "Art of Propaganda") around 2013. We, as a fourpiece, are based in Klein Brabant (located beween Antwerp and Gent) and have one album out entitled 'Burden' via Satanath Records.


2.How would you describe the musical sound that is presented on the album?

We had the idea to create something wich stands in the middle of sludge, black and stoner metal but apperantely people found it more doomish then we ever intended it to be. It is, like you might have understood, rather difficult to describe your own music so I just name some bands or adjectives people are reffering to when they hear our music. Celtic Frost/Triptykon, old Tiamat...dirty, heavy and nasty.

I can live up to that.

I'm not the one responsable for the lyrics but I do know we don't mind to step on so called holy crosses and I would like to make it clear you should see this as a metaphor. PJ tries to put a deeper meaning unto his lyrics and he's inspired by his own experiences in life. One might recognise aspects and most likely they aren't very positive...

4.What is the meaning and inspiration behind the name 'A Thousand Sufferings'?

Our starting point was not really groundbraking when we were searching for a bandname. It just had to fit the music...Though, our former guitar player (Noctiz/bass player in Lugubrum) came up with this proposal and it just felt right. There is no deeper meaning. Sorry for the dissapointement and a lack of yet another cool or dark story.

Our best show was mayby the last one we did, in Gent on the 'Occult Sabbath' with Goat Torment, LVHTHN and Zemail. The most memoriable was with Urfaust, Lugubrum and Alkerdeel in Antwerp. We dare to say we kinda fit with the other bands on this bill. Every band is different and all have something equal. We also did an extra coversong of my previous band 'Verloren' with Verderf (vocalist in Verloren) as a guest.

Our stage performance is quite simpel. We get on stage and we play. Nothing more, nothing less.

Individual shows are coming up in 2016 but touring is not our main goal. Though, we are open for any suggestion so if we get a serious offer to play anywhere we are glad to accept it.


7.On a worldwide level how has the feedback been to your music by fans of black and sludge metal?

It's too early to answer that question properly.


8.Are any of the band members also involved with any other bands or musical projects these days?

Our guitarplayer has it's own project called 'dreams and disasters' but I think it's been put on hold from the moment he joined us.


9.Where do you see heading into musically during the future?

Skip the doomish parts and adjust more heavyness and filthyness.

I try to follow what's going on musicwise and it goes from Chelsea Wolfe to Steve Von Till to Blaze of Perdition to whatever...I think it's nice to expierience there is STILL good music out there and that pleases me the most. It helps some of my Facebook friends are doing the research for me.

Well, thank you for the interview. I hope people find the time and effort to check out what we're doing. We wrote 50% of our next album so we hope to record this summer...

Posted by OccultBlackMetal at 4:56 AM No comments: 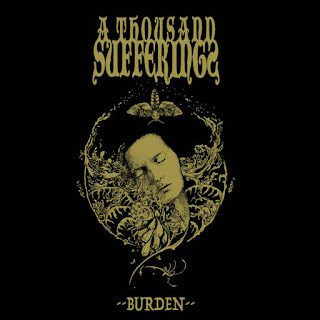 A  very  dark  and  atmospheric  sounding  drone  starts  off  the  album   along  with  some  spoken  word  parts  and  a  touch  of  ambient  and  on  the  second  track  the  music  goes  into  more  of  a  heavier  stoner/sludge  metal  direction  along  with  some  grim  black  metal  screams  making  their  presence  on  the  recording.

Posted by OccultBlackMetal at 5:54 PM No comments: