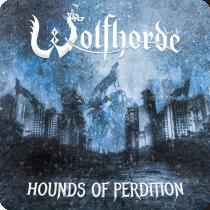 https://youtu.be/3gDW3NOl_24
Posted by OccultBlackMetal at 8:18 PM No comments: 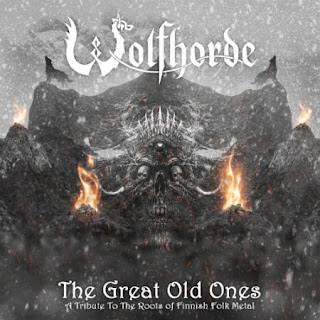 On  this  recording  Wolfhorde  pays  tribute  to  the  band  that  have  had  a  huge  influence  on  their  side,  the  production  sounds  very  professional  while  the  lyrics  are  written  in  a  mixture  of  Finnish  and  English  and  cover  Paganism  themes.

https://youtu.be/ANk_f1LWYCo
Posted by OccultBlackMetal at 8:17 PM No comments:

Wolfhorde is a Folk Metal band from Finland with a couple of self-released EP’s and a new upcoming debut album Towards The Gates of North. Mostly our music is combination of acoustic and electric instruments with intention to create atmospheric, but heavy soundscapes based on mythological and symbolic themes.

2.In 2016 you have a new album coming out, how would you describe the musical sound that is presented on the recording and also how does it differ from the stuff you have released in the past?

As a new element on the debut album we have introduced quite massive orchestras, which are not dominative in the sound, but rather in the background. Also the music does not solely rely on any particular instrument. It is more a combination of a lot of different sounds forming a huge stage of sound. As always, we wanted to have quite an organic sound to the album and I think we succeeded in this very well. Maybe it doesn’t sound as heavy and processed as modern metal nowadays, but atleast it sounds real. Also we are proud of the production on this one. None of the instruments were recorded in a real recording studio. Everything is still self-produced, but only better in every possible way.

3.This is going to be the first release in 4 years, can you tell us a little bit more about what has been going on during that time span?

We have been making this debut album during many years. Personally I (Werihukka) started doing the demos of these songs already in 2012. A lot of time went into making orchestral arrangements for these songs. Then we wanted to rehearse every song at the rehearsals together. The evolution of these songs at the rehearsing stage was the most important part of the process. In every occasion, we tried different things, drum arrangements, improved the groove and feel of the songs. This is important because the music only comes alive after it is actually played by a band and not intented to be played by drum machines and so on.

Also a lot of time went with completely other things during the making of this album. Unfortunately not all the time can be spend to making music.

4.Your lyrics cover a lot of Pagan topics, can you tell us a little bitmore about your interest in Paganism?

Norse mythology has been interesting subject for a long time for many of us in the band and also common travels to go hiking in the mountains of Norway brings closer to these landscapes. Pagan subjects are mostly sources of inspiration, not so much to do with religion. Imagination is a powerful tool of making art, but no one should base their believes in imaginery things.

5.What is the meaning and inspiration behind the name 'Wolfhorde'?

Wolfhorde as a name comes from a long forgotten song of ours. After deciding the name, the style of music has become something more suited to this name. Wolves have always been one of many powerful sources of inspiration. They are strong and independent animals, yet able to form even stronger one as a united pack. That is what the band is all about as well.

6.Has the band done any live shows yet or is this strictly a studio project?

So far no live shows. We have only done this as a studio project, but most certainly it would be nice to perform these songs live in the future.

7.Can you tell us a little bit more about the deal you have signed with Inverse Records?

We were already making this album and Inverse contacted us to make deal with them about the release, distribution and promotion of this album. We were very pleased about their offer and we still are.

The feedback has been surprisingly positive all the time. Even the earliest releases received very good impressions a long time ago. I think our music has changed a little bit since those times, but the band is definitely still the same.

Nothing is certain, but personally I would like to experiment with more simplistic approach next time and concentrate more on band and sit less at the computer doing orchestras and sorts of things. Something heavier and darker will definitely be on the way at sometime in the future.

There are too many bands to mention, but some of the bands that we would consider influential are Moonsorrow, Finntroll, Eluveitie, Ensiferum, Wintersun, Amorphis, Kiuas, Korpiklaani and so on. Not all the influence comes from folk metal or metal bands at all. And of course we just try to sound like Wolfhorde.

We listen to all good music without restrictions.

Hopefully you will like our new album coming in 22nd of January 2016.  Prepare yourselves for journey Towards The Gates of North.

Posted by OccultBlackMetal at 4:20 PM No comments: 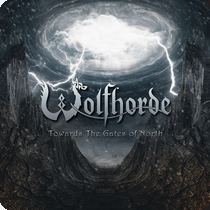 Wolfhorde  plays  a  style  of  folk  metal  that  is  very  epic  and  symphonic  sounding  while  also  mixing  in  the  heaviness  of  black  and  melodic  death  metal,  the  production  sounds  very  professional  while  the  lyrics  are  written  in  a  mixture  of  English  and  Finnish  and  cover  Viking  heritage and  mythology  themes.