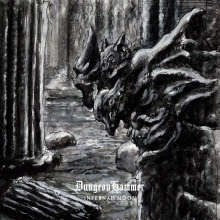 DungeonHammer  creates  another  recording  that  remains  true  to  their  mixture  of  black,  doom,  thrash  metal  and  punk,  the  production  sounds  very  old  school  while  the  lyrics  cover  darkness  and  death  themes.

Posted by OccultBlackMetal at 7:14 PM No comments:

1. Can you tell us a little bit about the project for those that have never heard of you before?
R: We are DungeönHammer, a 2 man act totally dedicated to honor the old gods of metal!
E: We want to honor and to perpetuate the tradition of old school black metal.

2. How would you describe the musical sound of the 7 inche's
E: We just want to sound as badass as Hellhammer did!
R: We are trying to make metal the way it used to be: simple, raw and passionate. We hope to convey this feeling in both 7"-es.

3. What are some of the lyrical topics and subjects the band explores with the music?
R: We write about hell and damnation! What did you expect?
E: And about witchery and the occult.

4. I can tell by the bands name and music there is a huge Hellhammer influence, can you tell us what is about Hellhammer that inspired this project and also what are your views of Tom G Warrior disowning his first band?
R: You're right about the HellHammer influence! It should be an influence in every band. HellHammer is just one of the best bands ever (early Celtic Frost too). There's just something magical in those songs, they really don't make 'em like that anymore. My views on Tom G Warrior these days: he should do whatever he wants, this guy is a living legend.
E: Yes Hellhammer and the two first albums of Celtic Frost are our main influence. I really dig the new sound Tom G Warrior has created with Monotheist and Triptykon. I can't wait to hear the new album.

5. I have noticed that the 2 members live in different countries, how do you both work on the song writing and recording process?
R: That's right! I live in The Netherlands and E lives in France, about 600 km apart from each other. There is no other way than to mail each other a shitload of demo recordings and ideas, so that's what we do. When the basics of the songs are fully explored, we record drums, bass and guitars in our rehearsal rooms. I then make a mix and from there on we start working on vocals and solos. It takes a lot of time, but it's worth it!
E: I think it's a good thing to be in a 2 members band. It's easier to agree on riff ideas and song structures. On the other hand, It'd be definetely easier if we both lived in the same town.

6. Currently your stuff is being put out by Bestial Invasion Records, how did you come in contact with this label and how would you describe the support that they have given the band so far?
R: Dominik of Bestial Invasion Records is really the best guy ever! When we put our first demo track on myspace he contacted us and said he wanted to release it! So he started Bestial Invasion Records. The amount of releases he put out is insane! He trades actively with all the cool distros around the world, like Hells Headbangers for example. It's really cool to see that our records are sold all over the planet. Without Dominik's support we couldn't have done this!
E: Eternal hails to Dominik!

7. Are there any other projects besides this band?
R: I also play in an experimental project and a noise project. Nothing that's really interesting for the people that like DungeönHammer...
E: DungeönHammer is my priority at the moment.

8. On a worldwide level how has your music been recieved by underground metal fans?
R: Really well! We were really surprised about that! Our first split with the Necro-Thrashers of RUST got some great reviews and is already sold out at Bestial Invasion Records! That's 500 records in 1 year! We are still really happy with that split and it's great to notice that the fans like it too.
E: We had a lot of positive reactions from true old school metal fans which is the most important thing for me.

9. What direction do you see the music heading into on future releases?
E: Same direction, making badass tracks from hell!
R: Yeah, we keep on heading in the same direction as the last 2 releases.

10. Besides Hellhammer what are some other bands or musical styles that have influenced your music and also what are you listening to nowadays?
R: Bathory, Motörhead and Discharge are my main influences for DungeönHammer. For the rest I listen to grindcore and experimental stuff, I don't listen to a lot of black metal.
E: My main influences are of course the first wave of black metal but also some doom metal and 70s rock too. I'm a huge fan of Pentagram and Saint Vitus.

12. Outside of music, what are some of your interests?
R: The usual stuff: hanging with friends, listening music, watching movies, going to gigs...
E: Headbanging, hanging out in pubs...

13. Any final words or thoughts before we wrap up this interview?
R,E: Thanks a lot for this interview, we really appreciate it! Check out our songs at our bandcamp: http://dungeonhammer.bandcamp.com/ and add us on facebook (www.facebook.com/dungeonhammer). Pay your respect to these bands and labels: Occvlta, Rust, Purgatör, Bestial Invasion Records, Burning World Records, Do Not Run We Are Your Friends, Geiser and Dead Neanderthals!

Posted by OccultBlackMetal at 2:16 PM No comments: 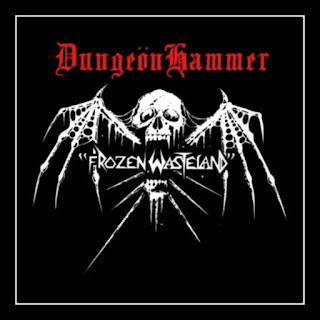 DungeonHammer are a band that has members from both France and Holland that mixes thrash, black metal , doom and punk together and this is a review of their 2011 split 7 inch which was released by Bestial Invasion Records.

Drums range from slow to mid paced drumming with not much in the way of fast playing or blast beats, while the bass playing has a very dark tone with riffs that follow the riffing that is coming out of the guitars.

Rhythm guitars range from slow to mid paced riffs that combine black, doom, thrash and punk together together to create a sound that is very dark and could of easily came out in the 80's, while the lead guitars are very raw and chaotic sounding guitar solos and leads.

Vocals are in the vein of Celtic Frost and Hellhammer style grunts and growls, while the lyrics cover dark and evil themes, as for the production it has a very raw, primitive, and dark sounding 80's feeling to it.

In my opinion DungeonHammer are a very good old school sounding black/thrash/doom metal band and if you are a fan of this style, you should check out this. RECOMMENDED BUY.

Posted by OccultBlackMetal at 3:40 PM No comments: