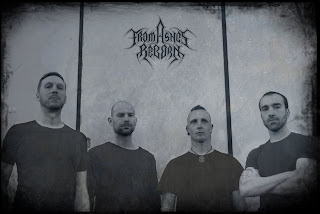 From Ashes Reborn – Interview A Different Shade of Black

1.Can you give us an update on what is going on with the band these days?
We are still in the promotion phase of our latest release “Existence Exiled” and received overall great feedback so far. We are close to launching the first merchandise pieces and are also evaluating options to play out material live.

2.In April you had released your first album, can you tell us a little bit more about the musical styles you went for on this recording?

The album is a mixture of melodic black & death tunes. We are always striving to create music that people will remember, hum along after they listened to the record. The things that we liked so much when we got into metal – catchy riffs, great melodies, grooving drums with accentuated blastbeats – is what characterizes the songwriting the most.

3.Most of the band members where in 'Badoc', what was the decision behind splitting up the band and forming a new one?

Mainly because the BADOC singer quit and we had kind of a hiatus for a while. In that time, our musical favors and songwriting have developed. Finally, we got exposed to our new singer Ronny, who brings a massive voice on top of our instrumental arrangements, which was another driver that changed our musical direction. So, after all, it was our desire to create a new band from scratch, with a new concept and without references to any history. And it turned out as a good decision, as it gives us full creative freedom to do what we want to do.

4.What are some of the lyrical topics and subjects the band explores with the music?
There is no general lyrical concept. Generally, the lyrics are treating individual experiences, reflections on life and humanity and other thoughts, that are moving within in our minds. It´s a mix of melancholia but also a positive outlook on our ability to turn things into good. Like a “Black Clouds and Silver linings” theme so to speak.  We are avoiding topics that are very stereotype or cliché, as this would not fit to our individual personalities.

5.What are some of the best shows that the band has played so far and also how would you describe your stage performance?
FROM ASHES REBORN just focused on the release of the debut Existence Exiled, so there were no shows so far. But we are thrilled to bring Existence Exiled on stage and are definitely evaluating options to do so.

6.Do you have any touring or show plans for the remainder of 2018 and early 2019?
No, there is nothing confirmed yet. It will most likely not be able for us before early 2019. But we are definitely open for any booking offers.

7.Currently you are unsigned, are you looking for a label or have received any interest?
We have made no efforts to get label signed so far. It was our plan to self-release “Existence Exiled” to bring the product very soon to life and to avoid any compromises. We wanted to fully control the music, the production, the design and the promotion. Generally, we are interested to work with partners who help us to grow FROM ASHES REBORN in a sustainable manner. It´s a matter of the exact conditions when we would consider to be signed, but we are open to that option in the future. With “Existence Exiled”, it was important to find our style and musical direction, also production wise.

8.On a worldwide level how has the reaction been to your music by fans of melodic and extreme metal?
Very Good. Existence Exiled achieved very positive feedback not only in Germany, but also from US, Canada, Australia & Scandinavia, even Japan, both by press and fans. Also, our followers on social media channels and bandcamp are widely spread across the globe. It´s a great thing to see, that FROM ASHES REBORN is able to satisfy listeners to that style of metal globally.

Our style is best describes as Melodic Black / Death Metal with a strong Scandinavian influence. This is not exactly intended, but more an output of our musical preferences and the result of working together in the songwriting process. There is a tendency in our songwriting to work a bit more with acoustic elements, we are experimenting with orchestral arrangements as well. In general, I do not foresee a dramatic change in the musical direction. We are five guys in a classic metal line up and want to make the best out of this and our instruments. This is the way we got tied to this music genre and that’s our ambition.

10.What are some of the bands or musical styles that have had an influence on your music and also what are you listening to nowadays?
We have a very diversified mix of influences, ranging from old Dissection, In Flames, Dark Tranquillity, Kataklysm to more new bands like Fleshgod Apocalypse or Der Weg einer Freiheit. But there also bands like Cannibal Corpse, Dimmu Borgir, Arch Enemy, Cradle of Filth, Trivium, Kreator or Dark Funeral that are influential for us in a way. We still have an ear on the underground and are permanently listening and digging for new stuff.

Music is primarily the main hobby of the band members, as much as family and main jobs allow. Two of us are also playing in other bands such as HIATUS, DER ROTE MILAN, ICHOR. We have one active motor cycle rider in our band, fitness is another hobby of some. But Metal & Music is still the main thing for us.

12.Before we wrap up this interview, do you have any final words or thoughts?
Thanks for the interview and for featuring FROM ASHES REBORN! We are looking forward to stay in touch and hope that there are some maniacs who enjoy Existence Exiled! 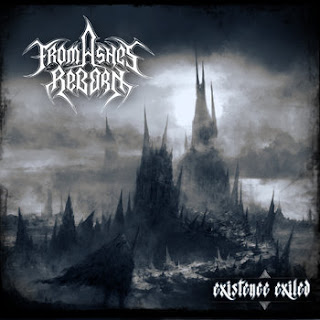 A  keyboard  orientated  intro  starts  off  the  album  along  with  some  stringed  instruments  before  going  into  more  of  a  heavier  and  melodic  direction  while  the  faster  sections  of  the  songs  also  bring  in  a  great  amount  of  blast  beats  as  well  as  the  vocals  being  mostly  death  metal  growls.

From  Ashes  Reborn  plays  a  musical  style  that  takes  the  melodic  sides  of  black  and  death  metal  and  mixes  them  together  to  create  a  sound  of  their  own,  the  production  sounds  very  professional  for  being  a  self  released  recording  while  the  lyrics  cover  resurrection,  reflection,  life,  society  and  hope  themes.

https://youtu.be/jDL62oFMunI
Posted by OccultBlackMetal at 4:55 PM No comments: