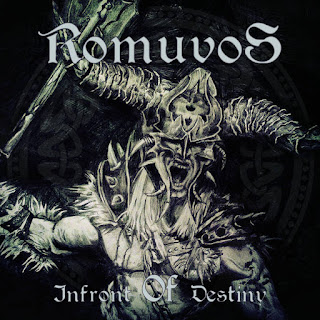 Thunder  and  rain  sounds  start  off  the  album  along  with  some  synths  a  few  seconds  later  before  adding in  pagan  chanting  and  acoustic  guitars  which  also  gives  the  music  more  of a  medieval  feeling  and  other  folk  instruments  can  be  heard  throughout  the  recording  and  it  also  mixes  in  with  the  heavier  side  of  the  music.

Romuvos  remains  true  to  the  pagan/folk  metal  sound  of  previous  recordings  while  also  mixing  in  some  black  metal  influences  in  the  guitar  riffing  to  create  a  very  heavy,  epic  and  melodic  recording,  the  production  sounds  very  professional  while  the  lyrics  cover  Paganism,  Lithuanian  Traditions  and  Medieval  Times.

Posted by OccultBlackMetal at 6:44 PM No comments:

13.What are some of the bands or musical styles that have had an influence on your music and also what are you listening to nowadays?
13. I have started to listen to metal music when i was very young, its the first thing that have catched my ears, it was at the age of 8 with Iron Maiden, than i discovered thrash metal with slayer and kreator, after that it was death metal and black metal, which is the genre that till these day i like the most. I can say that the bands that influenced me are: Summoning, Abigor, Satyricon, Falkenbach, Bathory etc. I have listened to allot of other music genres as well along the way, but today i listen mostly to Metal music and BM. There is one thing that makes BM unic and the most amazing music genre at least for me, it is "Magic", its this thing that is beyond the music, its like something not from these world and it can take you away for places so mystical and dark, it becomes a voyage into other dimensions
14.What are some of your non musical interests?
14. Nature! i love to just be out there, feel the air, the sun, the moon, i love the ocean, especially at winter days, i go to ride those waves, under the gray clouds and rumbling thunders, feeling the tremendous power of the see, there i am alone totally free from everything, me and the gods. I do paint as well.
15.Before we wrap up this interview, do you have any final words or thoughts?
15. Sure, i would like to say that all the Missionaries out there can go fuck themselves! live and let live, don't try to get inside our heads and into our life, thinking you have reached enlightment and now its the fucking time that somehow we supposed to do it as well. Anyway, big hails to all the metal heads out there, keep it underground and keep it real!
Thank you for this interview. 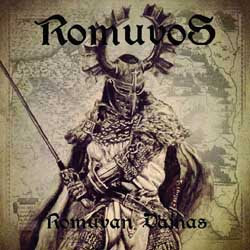 A  very  dark,  epic  and  melodic  sound  starts  off  the  album  along  with  some  guitar  leads  and  folk  instruments  and  it  leads  to  a  heavier  folk  metal  direction  as  well  as  adding  in  melodic  clean  singing  pagan  vocals  and  after  awhile  the  music  starts  adding  in  tragic  sounding  keyboards  and  acoustic  guitars  while  also  remaining  heavy  at  the  same  time.

Romuvos  creates  a  very  interesting  pagan/folk  metal  album  with  this  recording    focusing  more  on  melody  and  the  more  folk  music  side  of  this  genre  and  he  ends  up  creating  a  very  melodic  and  medieval  sounding  record,  the  production  sounds  very  professional  while  the  lyrics  cover  Lithuanian  and  Baltic  folklore  and  paganism  along  with  a  touch  of  Hermeticism  with  one  of  the  songs  being  about  Ouroboros.