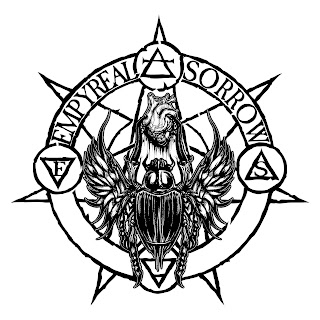 . For those that have never heard of you before, can you tell us a little bit about the band?

We are a Melodic Death Metal band from Germany, mainly situated in the area around Munich, Bavaria. The roots of Empyreal Sorrow go back to 2014 when our guitar player Martin Hofbauer recorded the first song ideas with bassist Sebastian Moser. But as both of them were involved in other projects at that time there was never a real plan to do more than just playing around with some cool riffs. After Martin’s band project came to an end and he still had a massive pile of really cool song ideas, the two of them sat together again in Sebastian’s own Grotesque Studios, just plain recording guitars and getting the arrangements in shape. At that time Sebastian was also doing lot’s of studio recordings with our drummer Julian, and as Julian is an incredible talented metal drummer it was just a natural thing to ask him doing the drums on the tracks that were already laid out at that point. So in the first half of 2019 we also had the first half of instrumental tracks ready. Joining as a second guitarist at that time was Markus Winter, who already played together with Julian in another band. As with Julian before it just clicked and for the rest of the year we concentrated on finishing and recording the instruments for all the rest of the songmaterial that we had prepared. With 2020 starting we also began with giving the songs a „face“ - as Sebastian was working out the vocal arrangements, we decided for another refreshing approach on our songs; we integrated more than just one vocalist to give everything more dynamics and to serve the diversity of the songs. That’s were our singer Martin Szeike came on board. While Sebastian is serving more of the Black Metal-like singing style, Martin is bombarding you with his utterly deep Death Metal grunts.

2. You have your first full length coming out in November, can you tell us a little bit more about the musical style you went for on the recording?

Martin’s vision when writing the first songs for Empyreal Sorrow was always straight Melodic Death Metal with a decent touch of this good old vibe from the 90’s. As we are all fans of bands like At The Gates, Edge Of Sanity, Paradise Lost, In Flames, Dark Tranquillity or Heaven Shall Burn it came out really natural when arranging and recording the songs. For fans of these bands our music should be a pleasing experience.

3. What are some of the lyrical topics and subjects that the band has explored so far with the music?

It’s mainly devastation and destruction, the downfall of mankind. There is nothing that gives you so much inspiration as the look on today’s declining humanity. There is a constant frustration swelling inside of us because of how irrational and egoistic mankind is feeding on its own essence. It is not the most optimistic view or topic, but our music is our personal outlet for the anger and incomprehension we feel, when thinking about this planet and the swarm of human idiots flooding it.

4. What is the meaning and inspiration behind the name 'Empyreal Sorrow'?

Most people believe in love as the strongest emotion and bond between one another. But we think that sorrow and pain unites us even more and can push you to grow beyond your own limits. We believe in this out of own personal experiences. Sorrow is more honest than treacherous love, stronger than fragile valor and more divine than hypocritical forgiveness. But with the acceptance of pain as one of the most important parts of life, you can really reflect on your own self and see through other people’s actions. Sorrow is our leader through life and our band is deeply inspired by this emotion.

5. Can you tell us a little bit more about the artwork that is presented on the new album cover?

The artwork of our debut album „PRÆY“ is a perverted adaption of the Vitruvian Man drawn by Leonardo Da Vinci - the destruction of the ideal of the perfect human being. It is the logical visual interpretation of our lyrical topics on this record and of our view on today’s society acting like a human swarm, blindly following and consuming the feces  of the overpresent (social) media. The cover was created by Björn Lensig (www.lensig.com), a very talented and amazing artist who has also worked for artists like Amon Amarth and is doing lots of illustration for games. His style was perfectly fitting our artistic vision for this album.

6. Has the band had any opportunities to do any live shows?

As you know, the current Corona situation is not an easy task, especially for the entertainment industry. There are certain chances to do live shows, but we have to see if it is worth the risk at the moment. So right now we are mainly looking into how we can reach our potential fans on other ways, via Social Media in particular. But we are also planning our future stage setup at the moment. The most important part in playing live shows is to give the audience an entertaining experience. With that in mind we try to avoid the stereotypical stage presence of so many Metal bands - just standing around, moshing and boring the crowd. All of us have longtime stage experience as live musicians and we know that activating the crowd counts way more in the end than playing every note right.

To be honest - we love the DIY attitude and we try to stick to it as long as possible. Sure, you need competent partners to be competitive on today’s music market. But our experiences especially with music labels in past cooperation's were not really satisfying and it showed us that if you are willing to keep pushing and work focused you can do so much yourself. We are not interested in giving other people control over what we want to do or express with Empyreal Sorrow. And maybe the most important part - as long as we as a band are working on all aspects of the band it bonds us closer together. Empyreal Sorrow is mainly about the enjoyment of making music WE love, the way WE want to and doing everything surrounding the band the way WE think it is fitting.

8. On a worldwide level how has the reaction been to your music by fans of melodic death and black metal?

As we are writing this, the promotional activities to get our debut album out to the music loving community and Metal fans is in full swing. First reactions so far are really promising and we hope to get more and more listeners into the Cult.

We’ll definitely never set to one certain rule of sets. Yes, we love Death Metal and we certainly will be part of this Metal genre in the future, but: While recording our debut album we already prepared a set of songs for a future EP release that alone has the goal to widen our own musical horizon. On this EP we will experiment with some new influences and let other musicians be part of our Cult Of Sorrow.

Naming musical influences is always a hard task, as so many listeners often are interpreting this as a sort of „the music will sound like XY“. But musical influences are often very subtle and subliminal. As mentioned above - it’s bands like At The Gates, Paradise Lost, Dark Tranquillity, Edge Of Sanity that surely had a huge impact on the songwriting process and you will hear that in our music for sure. But as all of us are very open to all sorts of musical influences, we have no problem with incorporating samples, clean vocals, Black Metal-atmosphere or other details that seem to fit the song. When it comes to today’s new releases - it’s really hard as there is so much new music released each day. Certainly we all have our „most loved“ bands we always stick to, but the musical range is really widespread - from Heavy Rock like Gary Moore to Thrash Metal like Anthrax or Black Metal like Dark Funeral.

There is definitely one non-musical-interest within the band we all share and that is enjoying nature. We all come from countrysides where you are near to the woods or mountains and if there is something that really frees up your mind - it’s going into the mountains or just grabbing the bike and breathe fresh air.

We invite you to join our Cult Of Sorrow and receive salvation through sound. Keep an eye on our online appearances to get the latest news regarding the release of our upcoming album „PRÆY“. And always stay Metal! 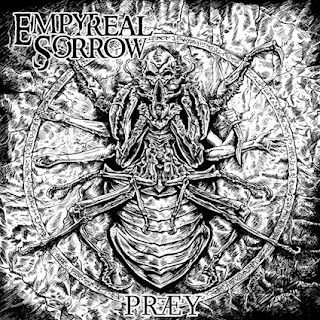 Clean  playing start  off  the  album  before  going  into  a  heavier  musical  direction  which  also  introduces  melodic  guitar  leads  and  solos  onto  the  recording.  Synths  can  also  be  heard  briefly  while  the  vocals  are  a  mixture  of  black  metal  screams  and  death  metal  growls  along  with  the  riffs  also  adding  in  a  lot  of  melody.

Empyreal  Sorrow  plays  a  musical  style that  takes  the  melodic  forms  of  black  and  death  metal  and  mixes  them  together  to  create  a  sound  of  their  own.  The  production  sounds  very  professional  while  the  lyrics  cover  devastation  themes.