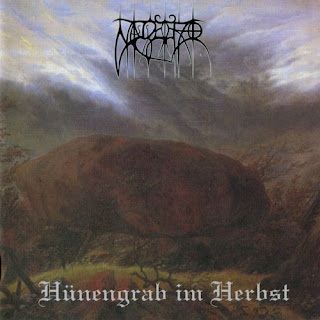 Nagelfar where  an atmospheric/melodic/viking/black metal band from Germany and this is a review of their 1997 album "Hunengrab im Herbst" which was released by Kettenhund Records.


Drums are a mixture of slow to mid paced drumming with a lot of fast playing and blast beats, while the keyboards bring a lot of atmosphere and psychedelic/folk edges to the music, as for the bass playing it has a very powerful sound that is very noisy and distorted with some lead bass lines.

Rhythm guitars are mostly fast black metal riffs with some mid paced parts that are very melodic, while the lead guitars bring a lot of melodic pagan/black metal solos to the music, as for the acoustic guitars gave the music a very dark edge.

Vocals are mostly high pitched black metal screams with some deep death metal growls and a lot of clean vocals, while the lyrics are in German and seem to cover Asataru themes, as for the production it has a very raw feel which gives the music an underground edge with capturing the sounds of the instruments perfectly.

In my opinion Nagelfar where a very underrated band and if you are a fan of underground melodic black metal you should check this band out. RECOMMENDED TRACKS INCLUDE "Schwanengesang" Hunengrab in Herbst" and "Srontgorrth (Das dritte Kapitel". RECOMMENDED BUY.

Posted by OccultBlackMetal at 6:58 PM No comments: