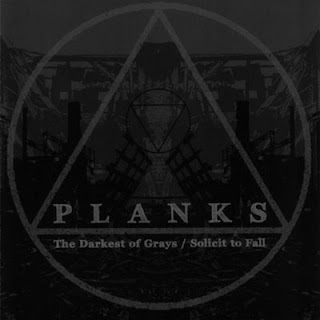 Planks are a band from Germany that mixes crust/punk noise rock, black metal and black'n' roll together and this is a review of their 2011 album The Darkest Of Grays Solicit To Fail" which was released by Southern Lord Records.

Drums range from slow, mid paced to fast drumming with a good amount of blast beats being thrown in, while the bass playing has a very heavy and strong tone with a lot of powerful sounding riffs that are very noisy and distorted, as for the synths which are only utilized briefly they bring a very dark avant garde edge to the music.

Rhythm guitars range from slow, mid paced to fast riffs that combine influences from crust/punk, noise rock, black metal and black 'n' roll  to create a sound that is very original sounding and on the instrumental there is some soft and slow playing, while the lead guitars when they are utilized they are very dark, distorted and melodic sounding.

Vocals are a mixture of crust/hardcore style yells and screams that are also heavily influenced by black metal with some occasional spoken word passages and samples, while the lyrics cover everyday and hateful themes, as for the production it has a very heavy and raw sound to it while still being professional enough to the point where you can hear all of the musical instruments.

In my opinion Planks are a very good and original band that combines sludge with noise rock, crust/punk, black metal and black'n' roll together and if you are looking for a band that combines these styles together, you should check out this band. RECOMMENDED TRACKS INCLUDE "Sacred And Secret" "The Dead Return To War" "A Casket City" and "Into The Nothingness Within". RECOMMENDED BUY.