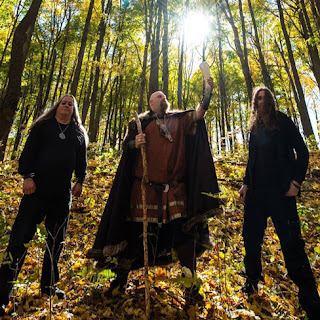 1. For those that have never heard of you before, can you tell us a little bit about the band?
The story of Hexenklad began with the planting of a seed, an idea: to create a metal band that was as deep in meaning and feeling as it was heavy and aggressive in sound. Co-created by guitarist Michael Grund (SIG:AR:TYR, ex-Battlesoul) and drummer Sterling Dale, Hexenklad’s roots sunk down after Grund made the drastic decision to move to the forests of Bancroft, Ontario, Canada, leaving city life and materialism behind. With this mental shift in place, and with the first two Hexenklad songs composed in those very woods, Hexenklad was born: a melodic, folk-inspired black metal band with thematic leanings towards nature, a respect for magick and ancient religions, and personal enlightenment and freedom.
Its branches spread in late 2015 with the addition of guitarist John “The Ancient One” Chalmers (Pagan Ritual), who helped round out the music. In 2016, after having recorded the drums for the new album “Spirit of the Stone”, Sterling Dale left Hexenklad and Timothy “Voldamares” Johnston (Eclipse Eternal) joined as vocalist, who expanded the sound still further. With the vision of the album and band now fully formed, comrades were called upon to complete the recordings. Alex Snape (Unbowed) did a guest appearance to add his signature bass sound, while guest cellist Raphael Weinroth-Browne (The Visit, Musk Ox) added his wizardry to several tracks. Now-permanent member Clare B. (Eclipse Eternal, ex-Operus) deepened the sound with keyboards to put the final touches to the tapestry. Having now completed the debut album “Spirit of the Stone”, Hexenklad branched out again, growing this time to include new permanent members Jon Kal (Pagan Ritual) on bass and Andrew C. (Pagan Ritual) on drums, once again reuniting father and son (John and Andrew).

2. You have an album coming out at the end of July. How would you describe the musical sound that is presented on the recording?
Take the depth of feeling of Falkenbach with the writing stylings of Hypocrisy, the folk melodies of Moonsorrow with the twin guitar blast of Dissection, the depth of emotion of Primordial with the overwhelming nature of Insomnium. Then you will begin to be able to describe the sound of Hexenklad’s new album “Spirit of the Stone”. Every song pulls from all the previously mentioned influences yet sounds completely unique in its essence. Heavy yet melodic, violent yet uplifting, extreme as a whole yet with moments of beauty and calm, this is Canadian Folk-Influenced Black Metal.

3. Some of your lyrics deal with Magick and Ancient Religions; can you tell us a little bit more about your interest in those topics?
The lyrics of this album are an amalgamation of ideas and writings from Michael Grund, an eclectic spiritualist, seen and interpreted through the eyes of Timothy Voldemars Johnston, who is Asatru. For many years now both have delved into the depths of ancient wisdom and beliefs and formed ideas around what they found. Each song’s lyrics revolve around a different aspect of those beliefs and ideas, and how they relate to life and the world around us. Those topics have such depths to explore that each word said about them holds a spark of Magick that can be felt. It is one of the reasons the album has so much energy in it—so much momentum and unbridled wildness.

4. What is the meaning and inspiration behind the name 'Hexenklad'?
The name Hexenklad was the brain child and creation of guitarist Michael Grund, the founder of the band. In his own words:
"The name itself was one of those words that came to me in a quiet moment. Depending on how the listener chooses to interpret it, the meaning is somewhat open. For me it ties in to Magick, occult, witchcraft, and many otherworldly themes which are present within the music. The literal meaning when broken down: "Hexen" - a spell, to curse; and "Klad" or "Clad" - covered in."

5. What are some of the best shows that the band has played so far and also how would you describe your stage performance?
We played our first show just recently on July 7, 2017 in Oshawa, Ontario, Canada with our friends in Vesperia, Battlesoul, and Imperion and, judging by the audience response, it's safe to say it was very well received. Descriptions of our performance offered from the audience ranged from punishing and intense to epic, deep, and powerful. On a side note, our guitarist John "The Ancient One" dropped an amp head on his hand while loading in and played the show with a broken finger. A small example of our dedication to our craft.

6. Do you have any touring or show plans once the album is released?
We are currently in the process of booking shows to support the "Spirit of the Stone" album in the Ontario and Quebec provinces of Canada. On August 3, 2017, we have been given the great honour of being the first Metal band to perform at Kaleidoscope Gathering, one of the largest Pagan Gatherings in Canada. We are also playing a show with Ashbringer and Klarg in Toronto on August 26, 2017. And we're always open to offers...from anywhere.

7. The album is coming out on 'CDN Records'. Are you happy with the support that they have given you so far?
The support from CDN has been fantastic. They have given us complete breadth of artistic freedom with the music and imagery, which is our strength, and have provided us with rock solid support on the business and marketing side of things, which is their strength. Craig has assembled a team of professionals, Jason and Kim at Black Element for example, who are quite exceptional at what they do.  Simply put, they are good people and we are honoured to have them on our side.

8. On a worldwide level how has the feedback been to your music by fans of folk and black metal?
The response has been absolutely amazing! Far greater than we could have ever expected or imagined.  In late 2016 we did a photo shoot in a forest not far from our jam space. We made the conscious decision to avoid the conventional Black Metal background of a snow-covered pine forest and instead opted to capture the beauty and majesty of the Canadian hardwood forest in Autumn, something we all hold close to our hearts and something that better represents what this band is about. Once the images were placed on our Facebook page, we were greeted with an unbelievable amount of support from all over the globe—Mexico and Brazil in particular. Then, on New Year's Day 2017, we shared our first musical offering in the form of a YouTube video for our song “Path to Ruin”, and even though it was a simple picture video, once again we were blessed with an absolutely astounding response. It has really been quite a humbling experience and we are very grateful for all of the support. We are very much looking forward to the world experiencing “Spirit of the Stone” in its entirety when it's released on July 28, 2017.

9. Where do you see the band heading musically in the future?
We are very proud of the musical direction and trajectory that we have created thus far. Currently we have the framework for over a dozen new songs recorded, with more and more being written each month. At this point we are still in the early stages of composition and are simply capturing creative ideas as they emerge—some heavy and melodic, others quite folky and earthy. It's when we dive balls deep into writing mode later this year that these ideas will be refined and perfected. Musically, you can expect a continuation of the journey that we have created with “Spirit of the Stone”.  The heaviness, the melody, the harmonies, the highs and lows. An idea that we have been toying with is doing a double CD, the first disc being a continuation of the classic Hexenklad sound with the second disc being a more folk oriented acoustic, natural offering.

10. What are some of the bands or musical styles that have had an influence on your music and also what are you listening to nowadays?
Obviously, the aforementioned bands—Moonsorrow, Falkenbach, Hypocrisy, Dissection, Primordial, and Insomnium—have all had a deep and powerful influence on the Hexenklad sound and the creation of "Spirit of the Stone". But that is only the tip of the iceberg, as we are all rabid, insatiable music fans.  Emperor, Gorgoroth, Arkona, Woods of Ypres, Amon Amarth,  Forteresse, Wolven Ancestry, and Taake, among others, are in constant rotation. Some bands that have recently caught our ears are MGLA, Helheim, Nargaroth, Batushka, Elderwind, Vallendusk,  and Thrawsunblat. As you can see, our influences are vast and ever-growing.

11. What are some of your non-musical interests?
Spending as much time in nature as possible, drinking with comrades and kin, axe-throwing, reading, philosophy.

12. Before we wrap up this interview, do you have any final words or thoughts?
Each of us has spent many years in other bands honing our craft, finding ourselves and our voice, and it is our belief that we have been doing so in preparation for this project. The path lies ahead. We hope you join us on it. Horns up!

Posted by OccultBlackMetal at 10:06 AM No comments: 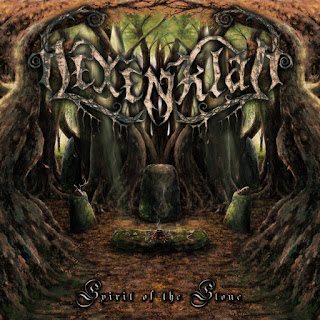 Clean  singing  can  also  be  heard  at  times  while t he  keyboards  also gives  the  songs  a  more  epic  atmosphere  and  after  awhile  acoustic  guitars  and  folk  instruments  are  also  added  into  certain  sections  of  the  recording  and  some  of  the  tracks  are  very  long  and  epic  in  length  and  the  fast  riffs  also  bring  in  a  decent  amount  of  tremolo  picking  while  spoken  word  parts  are  also  used  briefly  and  they  close  the  album  with  a  very  tribal  and  shamanistic  sounding  instrumental.

Hexenklad  plays  a  musical  style  that  takes  folk  and  melodic  black  metal  and  mixes  them  together  to  create  a  sound  of  their  own,  the  production  sounds  very  professional  while  the  lyrics  cover  Magick  and  Ancient  Pagan  Religions  themes.