ANTON: Chaossworn is a melodic death/black metal band from Haparanda, northern Sweden. We've been active since the fall of 2004, under the moniker Cryptic Death. The name was changed to Chaossworn in late 2009. We have just released our first MCD called 'Chalice of Black Flames' through Abyss Records.

ANDREAS: Me and Janne played together in various bands/projects back in the 90s, so in a sense Chaossworn dips its rotten roots further back in the dark past!

JANNE: Yup; we’ve been brooding and slithering in the local underground for the last 15 years, but not until now has our message and force become strong enough to be unleashed upon the larger masses. Years and years of honing our skills in the dark are starting to pay off. Now if only we could get David Hasselhoff interested...

JANNE: It should be quite clear. We are sworn to Chaos, as opposed to Law. Chaos represents boundless creativity and infinite possibilities, which the strong-willed may utilize to his or her needs or wants. Law stands for conformity and slavery of the mind; it is for the weak who can not, or will not, stray away from the safe path of herd mentality that slowly but surely grinds and forces everyone into the same mold. And as one of the main principles of the band, if not the only one, is to do what the fuck we want - well, I just think that we've found ourselves the perfect name.

4. How would you describe the lyrical content of the music?

ANDREAS: Depends on the song really, since they deal with various subjects, or aspects of those subjects.. It ain't about no urban themes. No matter what the lyrics are about, they're an integral part of the music, and given as much attention in the writing process as the riffs themselves. Phrasings, meter, all that shit, given utmost attention. We're not dishing out tripe.

5. Have you had the opportunity to do any live shows yet, if so what are some of the best shows that the band has played so far?

ANTON: We have been playing live since the start as Cryptic Death. I would say our best show was at Nordic Rage festival in Boden 2008, w/ The Haunted, Carnal Forge, etc..

ANDREAS: The gig we did back in January this year, in Lulea, was pretty intense. Parts of which can be seen on Youtube. Still, Nordic Rage Fest was definitely the biggest in terms of crowd and exposure.

NIKLAS: The black/death metal scene in northern Sweden is not the greatest, but we played a show in Boden on a metal festival called Nordic Rage, which was for me the greatest show!


ANDREAS: South America; The water gives you the runs, crowd is batshit insane, nobody speaks English. Pandemonium. I heard Poland is pretty kickass too.

JANNE: I think it’d be cool to tour in Kyrgyzstan, or Mongolia. Man, those guys would be astonished to have us banging and snarling at their local yard/palace/mountaintop/whatever. And probably kill us too. Or die trying.

7. What do you want to accomplish with your music?

ANDREAS: I want the music to become as kult as the shit I listen to myself.

JANNE: To me, creating music is first and foremost a tool for self-expression, without which I could not live. Sowing the seeds of the mind, nourishing them with skill and craftsmanship, watching and hearing them grow and blossom in the dark orchards of the spirit of arts, tasting the bittersweet juices from their ripe flesh...thus inspiring the circle to start anew. It is a beautiful thing, creation, and we hold it in our hands. Hopefully our music can also inspire others, as many have inspired us before, and still do. The cycle is most exquisite, and should be kept spinning.

8. What direction do you see the music heading into on future releases?

ANDREAS: We got our sound down just right. What we will do in the future is to produce even fiercer riffs, better hooks, better lyrics and wrap it up time and time again. The material evolved from the last two demos to the MCD growing increasingly darker and unfriendly, and that'll likely continue. Without ambition there's no point in doing anything, and I got plenty ambition. We're destined to outdo ourselves time and time again. Don't expect any genre leaps a la Dodheimsgard.

9. How has the feedback been to your music so far by melodic black.death metal fans worldwide?


ANDREAS: We wouldn't release it if it wasn't up to snuff. Reviewers agree!

NIKLAS: Mixed. People in Sweden have been more critical than the rest of the world. Dunno why is that.

10. What are some bands or musical styles that have influenced your music and what are you listening to nowadays?

ANTON: Bloodbath, Desultory and Necrophobic, and of course bands from other genres.

ANDREAS: Been listening to Tiamat “Clouds” a lot lately. I got a few tapes in the car getting regular windings: Bathory "Blood Fire Death", Darkthrone "Under a Funeral Moon", ZZ Top "Eliminator" etc.

JANNE: All music influences me all the time. The atmosphere of Limbonic Art and Emperor; the creativity of Faith No More and Meshuggah; the vibe of Kingston Wall and Änglagård; the harmonizing craft of Bach and Rachmaninoff; the earnestness of Stevie Ray Vaughan and Grand Magus etc etc...I could go on for ages.

11. Does Satanism or Occultism play any role in the music?

12. What are some of your interests outside of music?

Posted by OccultBlackMetal at 5:51 AM No comments: 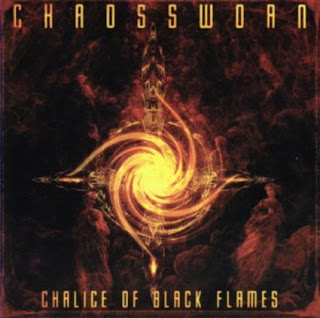 Chaossworn are a band from Sweden that mixes melodic mixture of black and death metal and this is a review of their 2010 E.P "Chalice Of Black Flames" which was released by Abyss Records.

Drums are mostly mid paced to fast with some slow drumming, while the bass playing follows the guitars with a lot of melodic riffing.

Rhythm guitars have a good mixture of slow, mid paced to fast riffs that blend black and death metal together with a lot of melody, while the lead guitars are very heavy and melodic guitar solos.

Vocals are a mixture of high pitched black metal screams and death metal growls, while the lyrics cover death, darkness and destruction, as for the production which was recorded at Unisound Studios in Sweden and produced by Dan Swano sounds very professional and all of the instruments have a good sound.

In my opinion Chaossworn are a very good melodic melodic black/death metal band that should appeal to all fans of that genre with this 3 song e.p. RECOMMENDED TRACK ON THIS E.P is "Bringer Of Storms". RECOMMENDED BUY.

www.myspace.com/chaossworn
Posted by OccultBlackMetal at 5:42 PM No comments: