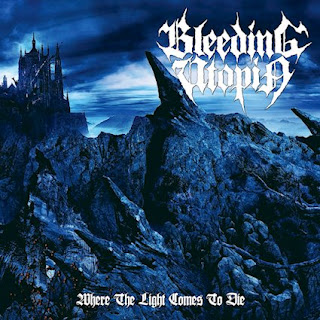 All of  the  musical  instruments  on  the  recording  have  a  very  powerful  sound  to  them  along  with  the  music  being  very  heavily  rooted  in  the  Swedish  style,  as  the  album  progresses  a  brief  use  of  clean  playing  can  also  be  heard.  The  production  sounds  very  professional  while  the  lyrics  cover  war, religion  and  serial  killers  themes.

https://bleedingutopiablacklion.bandcamp.com/album/where-the-light-comes-to-die
Posted by OccultBlackMetal at 3:37 PM No comments:

1.Can you give us an update on what has been going on with the band since the recording and release of the new album?
We have been writing some new stuff and have had some auditions for a new drummer. At last we found our guy Mauro.
So the lineup will soon be complete and we can get going with the rehearsals and get out there and do some gigs and tours.
And we also have been busy with the new records label we started, Its real fun but a lot of work.

2.In April you had released a new album, how would you describe the musical sound that is presented on the recording and also how does it differ from your previous full length and ep?
It's definitely different than our previous album and it's more defined towards how we want our sound to be.
Heavier, darker, faster and more melodic with a old school yet modern sound. More death metal and less thrash metal but the thrash influences will always be there.
The Ep and the first album was written by Andreas over a few years before there even was a Bleeding Utopia.
We just had to rehearse the songs and then enter the studio to records them.
On ”Darkest Potency” we wrote most songs together and took more time in pre-production.
We tried a lot of different arrangements in both music and vocals and re-wrote a lot of the riffs just to keep it more simpler and more right to the point.

3.What are some of the lyrical topics and subjects the band explores with the music?
The lyrics are mostly about death and murder, which fits in with the musical style as well as the aggressiveness of the music, and there's more individual themes or stories within each song.
All the songs have their own story. But all the songs are about death and destruction is different kinds and ways.
We like to write as i am writing a script to a short film. And when you read the lyrics and hear the music you get o ”film” inside your head. Like when you listen to an Amon Amarth song you can almost see the battle in front of you.
Maybe everyone don’t get the same film in their heads , I hope that people create their own film and feeling when listening to our songs.

4.The band was broken up for awhile, what was the cause of the split and also the decision to reform?
From the beginning (2003) it was only a project. Bleeding Utopia as a 100% band was formed in late 2009.
So this lineup (from 2009) never "broke up". Some of the guys wanted different things out of their life's so they left the band on a friendly basis. But we kept on writing and being creative all the time. So there was nervier a brake up just a reconstruction of the band in 2013.

5.The band was originally known as Operation SidEffecf then Delicous Deformed, what was the decision behind the name change and also the meaning and inspiration behind the name 'Bleeding Utopia'?
It was only a side project from the beginning, and I guess that you have to name it something.
Operation Sideffect was the name when it was only Andreas writing songs as a side project in 2003.
In 2004 Andreas wanted to to some gigs and asked a few friends to join and changed the name to Delicious Deformed,
the intention was to make it a band but  due the lack of time from almost every ”member” in was put on ice and almost forgotten, haha. But when Andreas band Astral Carneval called it quits in the fall of 2009 Andreas decided to take things to the next level in and do things seriously it was time for a new name…and it became BLEEDING UTOPIA.

6.What are some of the best shows that the band has played over the years and also how would you describe your stage performance?
The best shows we played  was definitely when we played on home turf during the Scandinavian Aggression Tour and everything felt really good and we had the support of our friends and family as well.
Another really funny show was in Hyvinkää, Finland, where we played in a small town at a location that had almost no sound setup or designated stage, it was more playing in one of the corners. That show really turned out awesome though and we all had a great time.
We´ve always had a high standard when we play, no matter what kind of venue. Sometimes  the back line and lights has been a joke. But we always get up there and do everything we can to give you a great show.
When the band that is going up on the stage after us feels uncomfortable thanks to our show, we have succeeded.

7.Do you have any touring or show plans for the future?
Not at the moment, but now that we've found a drummer our future is looking very bright!
We are about to rehearse with the new line up and then hopefully get out on the road as much as possible.
So prepare your necks, hopefully our booking agent ”EAM-agentur” will book some cool shows around Europe and some cool festivals for spring and summer 2015.

8.The new album was released on Bleeding Music, can you tell us a little bit more about this label?
It's a label we started ourselves in order to have more control over the music and also to try and help other bands out as well with distribution among other things. We have been in the music business a long time and felt that we wanted even more music in our lives. And there are so many great bands out there that deserve to be heard and seen so want to try to help those bands.

9.On a worldwide level how has the feedback been to the newer music by fans of extreme metal?
We've really been blown away by the awesome response that it has gotten and it's great to see so many people enjoy what we do best!
It feels like we have something good going on. People seems to like it and the reviews has been great so far.
Hopefully people will show up on our gigs and upcoming tours as well, haha.

10.What is going on with some of the other bands or musical projects these days that some of the band members are involved with?.
Right now bleeding utopia is our only focus. It takes time to give 110%. But having our own studio always creates ”late night creativity”. We have no other band than Bleeding Utopia but if anyone of us have something to record just for fun we do that of course. But Bleeding utopia is priority number 1 for all of us.

11.Where do you see the band heading into musically during the future?
You never know what the future holds, but we've really found our direction with this album and we're definitely gonna continue to develop our music and sound with this reference.
We will continue on the same path. It feels like we have our sound and will keep it that way. We stand our ground and will not try to make songs for the radio.

12.What are some of the bands or musical styles that have had an influence on your newer music and also what are you listening to nowadays?
Can't really pin-point where the inspiration comes from but listening to a lot of music and trying to come up with stuff that you like is basically the whole process.
Joakim enjoy good music regardless of genre and that can be all from Jazz, Blues, Fusion towards Death metal, Grindcore, Power Metal among others.
For David and Andreas almost everything goes back to the 90`s death and black metal. Bands like Dissection, Amon Amarth, Entombed, At the gates etc. Nowadays we listen and gets inspiration from all kinds of music.
Where one genre is lacking, another fills the void and vice versa.

13.What are some of your non musical interests?
Joakim is really into Cycling but his main hobby outside music is definitely computer gaming.
David is hanging out with friends drinking beer, motorcycles, animals,
Andreas have a big film interest and he watches almost everything that's on history channel and discovery channel.
But in the end almost everything we do has some kind of connection to music.

14.Before we wrap up this interview, do you have any final words or thoughts?
Buy Darkest Potency, bang your head, See you on the road in the near future!

Posted by OccultBlackMetal at 2:10 PM No comments: 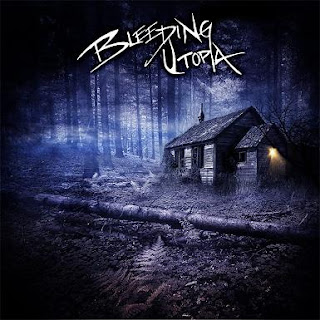 Bleeding  Utopia  play  a  style  of  blackened  death  metal  throughout  the  recording  that  is  very  heavy  and  melodic  at  the  same  time  and  they  also  have  a  good  balance  between  both  modern  and  old  school  influences  in  their  musical  sound,  the  production  sounds  very  professional  while  the  lyrics  cover  dark  themes.