1.Can you give us an update on what has been going on with the band since the recording of the new
album?

Bill: We are eagerly waiting for everyone to hear what we have been working on for the last two years!
Other than that we have started working on our next album over the summer. It is going to be a cover
album, which will change things up a bit for us.

2.You have a new album coming out in June, how would you describe the musical sound that is
presented on the recording and also how does it differ from the stuff you have released in the past?

Bill: This album I really tried to slow things down. I have always listened to a lot of funeral doom and stoner doom, and I made an conscious effort to implement these influences. I would describe our sound as death/doom with some post metal mixed in, but I have noticed that listeners are really picking up on the black and death metal aspects of our music.

3.Your lyrics cover Conspiracy, Fantasy and Mythology themes, can you tell us a little bit more about your interest in these topics?

Bill:  I have always been interested in fantasy and mythology.  Perhaps I am dissatisfied with the world asas we know it, so I like to imagine what the world was like during ancient times.

4.Your album artwork has a couple of followers of Cadmus being devoured by a dragon, can you tell us alittle bit more about why you picked this artwork for the new album?

Bill: I saw this painting when I was much younger and it has always stuck with me. The life of Cadmus was an inspiration for the lyrics on the title track, and some of the other tracks, although not quite so directly. A "Cadmean victory" is to win the battle but lose the war. Cadmus's life was quite successful, but he was cursed by the gods, and tragedies followed him and his family. His story of futility relates to alot of the sounds and themes that Torii explores.

5.What is the meaning and inspiration behind the name Torii?

Bill: I would prefer to keep that private. Sorry.

6.Currently there are only 2 members in the band, do you prefer working as a duo?

Bill: We have talked about getting a proper band together and playing shows. However, we both have
other careers, so it works for us now. I enjoy the process of composing and self-editing all of the music,and Eric likes to tie in his stories and lyrics.

7.Has the band done any live shows or is this strictly a studio project?

Bill: We have never played live but hopefully we can in the future. Although our music is quite morose at times, we can still bring some energy that I think would translate well in a live setting.

Bill: We are looking, but we haven't received much interest. Since we have other careers, this is fine for us.  However, if getting signed means more people can listen to our music, then we need to do everything we can to make that happen.

9.On a worldwide level how has the feedback been to your music by fans of black, doom and death
metal?

Bill: A lot of our fans are from European countries, which is great! We have heard good things from
reviewers and fans from England, Italy, Germany, Norway, and I'm sure there is more.

Bill: The second track on our upcoming album,  "Theory of Existence", was a bit of an adventure into
stoner metal for us. It is not as melodic as most of our other stuff, but it is a blast to play. So, you may
hear some more material like that in the future.

11.What are some of the bands or musical styles that have had an influence on your newer music and
also what are you listening to nowadays?

Bill:  I would say Ruins of Beverast, Esoteric, OM, and Swallow the Sun have probably
had some influence on our new stuff. They are all doom bands from various sub-genres, but most of
them are on the psychedelic side of things. More recently I have been listening to Cult of Luna, MournfulCongregation, and Summoning.

Bill: I just enjoy composing and creating things. I like creating art and building furniture and cabinets.

Bill: Thanks for your time.

Posted by OccultBlackMetal at 6:40 PM No comments: 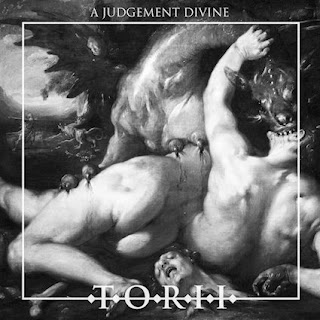 Torii  plays  a  musical  style  that  takes  black,  doom,  sludge,  death  and  post  metal  and  mixes  them  together  to  create  a  sound  of  their  own,  the  production  sounds  very  professional  for  being  a  self  released  recording  while  the  lyrics  cover  Conspiracy,  Fantasy,  Social  Issues  and  Mythology  themes.

Posted by OccultBlackMetal at 7:58 PM No comments: