Hedon started out late 2012 in gothenburg, Sweden. Our goal was a blend of black- death- and trashmetal, which I think we´ve succeeded in. 2014 we released our debut, ”summon the demons” by ourselves. We had a break after that for some years, but since 2019 we´re back on track again!

I´ts more raw and filthy, like we wanted it to be from the start. The first album is somewhat colored by our previous band, Arise, which most of us played in before Hedon. This time we also have a new singer (Sebbe) who fits the music better, and a new guitarrist in Christoffer – who is replacing Kenneth from the debut.

3.This is also your first release since 2014, can you tell us a little bit more about what has been going on during that time frame?

We´ve had struggle of all kinds – no rehearsal place, member who grew tired and quit, severe deseases and some of us got kids. I guess you can say life happened.

4.What are some of the lyrical topics and subjects you explore with the newer music and also how would you describe your progress as songwriters over the years?

Overall dark lyrics, hedonism, war, antireligion. I guess the songs have grown longer and not as predictable as before. We always try to challenge ourselves and you will always get new influences too.

5.What is the meaning and inspiration behind the name 'Hedon'?

Hedon is simply a newer/ alternative spelling of heathen. I think Dark Tranquillity has a song spelled the exact same way. It has always been close to us beeing from Sweden, as we were called heathens before christianity came. And it´s hard not to be fascinated by the vikings.

6.Can you tell us a little bit more about the artwork that is presented on the new ep cover?

It was an idéa we´ve had for years – a symbol in form of a family weaponshield. Since goats has a big role in hedonism, it felt obvious to have a couple of those in guard on a shield. We gave a friend the task to virtualize the ideas and we´re very happy with the result!

Because of the long break 14-19 we´ve had not made many liveshows yet, but we did one with Puteraeon and Turbocharged – and that was a good one. We have also played a couple of times in gothenburg, and should have played with Avslut this april, if is wasn´t for covid. But as soon as the restrictions will losen up, we will start making shows again. I guess we´re pretty fierce on stage, at least that´s what I´ve heared. We constantly trying to bring something new when performing – fans, sidedrops, megafones for some vocal parts etc

8.On a worldwide level how has the reaction been to your music by fans of melodic black and death metal?

Overall very good. But we have suffered lack of promotion and a good distro. Right now we have Downfall records, so I think we will reach out to many more this time. We have to work on this. Because of the blend between black and death metal we do often get connected with Necrophobic, but I think we have more variation than they do. They´re good though, so it´s a honourable comparing.

Kenneth have been playing with the Accept tribute band Accepted, but don´t know if he´s still in there. Patsy (former vocalist, and also vocalist of Arise) is in a band called All Wasted now.

10.When can we expect another full length and also where do you see the band heading into musically during the future?

Don´t know to be honest. In a way it feels like the full lenghts is of less importance these days – most people does not play a full record, but some songs and that´s it. On a full lenght there is always fillers and it takes much longer time to do and is of course a lot more expensive to do also. On a Ep you will not get fillers. But we´re still fond of the full length format after all, so there will be one some time. But for now the next one will probably also be an Ep.

There are so many, but some of the most relevant has to be Dissection, Mgla and Behemoth. We´re trying to listen to most music in our genre, for example the new Uada and Necrophobic is spinning a lot now.

12.Does Occultism play any role in your music?

Not particulary, but I guess you can say that every sub-culture is of interest. Anything that in a way is antireligious or pagan or just mystic.

Thanks a lot for the interview, we appreciate every form of support and spreading the word! We always try to give as much as we can to the fans – take a look at the new Ep for example; we spend a shitload of money to include a nice poster and an etching for the fans. Just to get a nice package and give them some little extra instead of just a standard thing. Check out our facebookpage or instagram for news and also the Downfall page. Cheers and hope to see some of you out there after this pandemic!

Posted by OccultBlackMetal at 7:29 PM No comments: 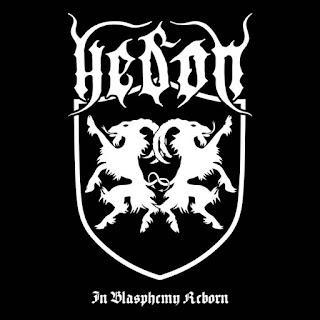 Hedon  plays  a  musical  style  that  takes  the  90's  melodic  styles  of  black  and  death  metal and  mixes  them  together  to  create  a  sound  of  their  own.  The  production  sounds  very  professional  while  the  lyrics  cover  darkness,  blasphemy, occultism  and  war  themes.