1.For those that have never heard of you before, can you tell us a little bit about the band?
#1. We are a 5 piece Death Metal band based out of Southern Ontario Canada. As far as our sound goes, we aim for fast paced, aggressive death metal that has a melodic edge to it. We dip into several sub genres of Death/Black metal to keep things fresh and new, including slam, brutal death, tech death, melo death, and even some death core influences mixed in as well. We also love our blast beats and pig squeals. We are currently playing shows locally and are in the process of writing a full length album.

2.Recently you have released an ep, how would you describe the musical sound that is presented on the recording?
2. On our ep " The Path to Oblivion " it is hard to catagorize our sound in a specific genre/sub genre. We included a wide variety of different styles within each song. One minute a song will be melodic and technical, then the next section is heavy and brutal to name one scenario you will encounter upon listening to the ep. We do stay consistent with a fast paced, heavy, melodic, aggressive and brutal approach with our overall writing style as a band. The ep is very fast paced and filled with blast beats, harmonized guitar riffs and brutal vocals ( anything from pig squeals, gutterals and shrieking highs ).

3.What are some of the lyrical topics and subjects the band explores with the music?
3. Most of our lyrics are about brutal stories, with the exception of a few songs that have a more serious approach that touch on topics such as depression, anxiety, and other things that plague peoples every day lives. Some songs are even based off of classic horror films

4.What is the meaning and inspiration behind the name 'Goreworm'?
4. The name Goreworm did not come from any of the bands members. It was originally from an acquaintance of founding member Brent Moerschfelder. This guy had a " band " called Goreworm for several years but he never went anywhere with the project. So when he announced that he was giving up on the project Brent asked him if he could use the name and the name was granted to him. Brent always found Goreworm to be a genius name for a Death Metal band and took this opportunity to make it into something for fun. And that's how this " Gorewom " came to be

5.What are some of the best shows that the band has played so far and also how would you describe your stage performance?
5. As far as shows go we only have 2 down, with a few more booked in the spring. As of now the band is not even a year old and only started playing shows in January 2018. The two shows we have played went very well and we where received very well but the crowds, resulting in very positive feedback. Our stage performances have gone very well, our main goal is to play as tight as we can, while being entertaining for the spectators with energy such as head banging and moving around on stage as much as we can.

6.Do you have any touring or show plans for the future?
6. We don't have any tours planned as we are not a full time band. We all have children and houses to pay for and just do music as a hobby, but if an opportunity to do a tour of Canada came our way, we would do so since it is a goal of ours. We do have a few local shows upcoming later this year in Southern Ontario.

7,The ep was released through 'CDN Records', how did you get in contact with this label?
7. We got in contact with CDN the day we released our single " Final Nightmare " off of our ep " The Path to Oblivion ". A representative for CDN Records had seen our album artwork that our hired artist shared on social media back in June of 2017, it grabbed his attention but at the time we had no music ready to show him so he told me to show him the music when we had it ready. On November 25th 2017 we released the single and when we shared it with the same CDN representative, he offered to sign us. We had other offers from other record companies but since we are not full time musicians, we went with CDN because they where most fitting for us.

8.On a worldwide level how has the feedback been to your music by fans of black and death metal?
8. As far as worldwide feedback we don't have much to base off of because so far we have only released a single from the ep. We have had several very positive reviews of the ep, rating the ep anywhere from 7/10 to 8.5/10. On social media we have had very positive feedback as well with lots of support from new fans. If we have learned anything from the reviews  feedback it's that people can't pinpoint what sub genre of metal best suits us since we have incorporated so many different styles to our music.

9.When can we expect a full length and also where do you see the band heading into musically during the future?
9. We are currently in the process of writing a full length already, We already have 4 songs composed ( 2 we are already playing live ) and we are very excited about the new material. It's more of the same but amped up even more. Founding member Brent Moerschfelder wrote all of the instrumentals on the ep, but now with a full line up of members we now have a whole new dynamic and wave of input to put towards song writing.

10.What are some of the bands or musical styles that have had an influence on your music and also what are you listening to nowadays?
10. To name a few bands that have inspired us are The Black Dahlia Murder, Despised Icon, Fleshgod Apocalypse, First Fragment, Ending Tyranny and Disentomb and many more. Musically we mix several styles into our songs ranging from Brutal Death Metal to morbid melodic Balck metal and everything in between. Lately I  ( Brent Moerschfelder, guitarist) have been listening to Alterbeast, First Fragment, Dark Funeral, Der Weg Einer Freiheit and even some Sum41 ( they are my non metal guilty pleasure).

11.What are some of your non musical interests?
11. Honestly outside of music I ( Brent ) don't really have many interests outside of music, I might play the odd video game and hang out with friends but most of my downtime is dedicated to my guitar.


12.Before we wrap up this interview, do you have any final words or thoughts?
12. Goreworm would like to thank you for the opportunity to do this interview and we hope everyone out there that hears us enjoys our music!

.
Posted by OccultBlackMetal at 7:04 PM No comments: 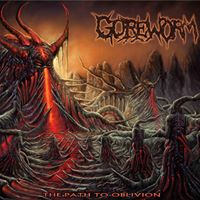 Goreworm  plays  a  musical  style  that  takes  melodic  black  metal  and  mixes  it  with  the  technical,  brutal  and  slam  styles  of  death  metal  to  create  something  very  different,  the  production  sounds  very  professional  while  the  lyrics  cover  dark  themes.

Posted by OccultBlackMetal at 7:45 PM No comments: