1.For those that have never heard of you before, can you tell us a little bit about the band?
The band was founded in 2011. Initially we’ve experienced some line-up changes, but have stayed the same since 2012 (Inez, Nika, Miha, Jakob, Rok and Gašper). Our wish is to write original songs. We prefer an epic, folky touch to the music and this reflects strongly in our style. Each member contributes a part of themselves to what we do and create.

2.So far you have released a full length and an ep, how would you describe the musical sound that is presented on both of the recordings and also how do they differ from each other?
Our music is a blend of many different metal genres but we mostly describe our sound as a mixture of epic and folk metal and this influence is present in both of our releases. The difference between the two comes down to the EP being our first project, meaning we were still looking for the kind of sound that we wanted to achieve and also the songs have mostly been written by Inez and Miha. By the time we recorded the full length, we’ve already gained more experience and knew what lies ahead of us, allowing for better preparations. The main difference however is that each member contributed something to the full length, making it much more colourful.

3.What are some of the lyrical topics and subjects the band explores with the music?
Inez' lyrics are mostly about struggles in life and the ability to see good in every situation, but she has also written an imaginary story about our ancestors. Jakob is more into fiction and he's a storyteller. For Gašper, it could also be said that he's a storyteller, but his expression mostly comes through music, inside of which we can discover stories.

4.What is the meaning and inspiration behind the name 'Zaria'?
At our first rehearsals (in 2011), each band member prepared some potential names for our band. In the end we have narrowed them down to two potential names, but according to MetalArchives, one of the two had already been »taken«. So the name that was left was Zaria. It is a name of a pagan goddess of morning and beauty. But we have also found out that Zaria is a name of one particular star – so this is where our logo comes from. We understand this name as a beginning of something new with the star as our guide.

5.What are some of the best shows that the band has played so far and also how would you describe your stage performance?
Unfortunately, we haven’t had many shows so far, but I can say that each one is a bit better than the previous. We record most of our shows and we try to learn something from it. In general we agreed that the best show so far was when we played at Metaldays 2014, 2nd stage. Many people came to see us there and they were really great. They were dancing, headbanging and even lifted a rubber boat with 4 people in it into the air. The audience was very grateful and they gave us great feedback. Also the stage was bigger than any we have played before and we were able to move about more freely.

6.Do you have any touring or show plans for the future?
There is no tour planned as of now, but there will be some gigs in the near future, including our first gig outside of Slovenia, which will take place in Waregem, Belgium on February 20th.

7.Currently you are unsigned, are you looking for a label or have received any interest?
Having a label would be nice, but for now, we’re just going with the flow. We’ll see what opportunities arise.

8.On a worldwide level how has the feedback been to your music by fans of folk metal?
It has actually been great. I would not limit our fans only to those of folk metal, because many people who have expressed their support for us are not fans of folk metal at all. We incorporate elements of many different metal genres into our music and almost every headbanger can find something to their liking.
I have to say we had a great response worldwide even though our lyrics are written in our mother tongue.

9.Where do you see the band heading into musically during the future?
This is something we cannot say as of yet. Our style is developing all the time, because we try not to limit our inspiration and it sometimes leads us to take an unpredictable turn. We'll see what the future has in store for us.

10.What are some of the bands or musical styles that have had an influence on your music and also what are you listening to nowadays?
Well, the answer to this question is different for every individual band member. However, in general we all look up to early Nightwish. They really made a mark in metal music. But there are also other bands who inspire us: Eluveitie, Epica, Ensiferum, Dream Theater, Equilibrium ... the great movie composer Hans Zimmer is also a strong inspiration for us.

11.Does Paganism play any role in your music?
Paganism is in some way a part of us. It is magical, full of great stories and beliefs, but I wouldn’t say it plays a great role in our music. It is there, just not too prominent. We get our inspiration from different things: everyday life, stories, legends... and paganism is one of them.

12.What are some of your non musical interests?
Again, it's different for individual members. Rok does wine tasting and speaks a whole bunch of languages, Gašper is really into Japanese culture, Jakob likes reading fantasy novels, Nika loves to party, Inez studies singing at the Music Academy of Ljubljana and has already had some opportunities to present herself as a soloist in different operas, and Miha is married and has recently moved to his new home, so it is safe to say he has his hands full. We definitely want to let our friendship grow. We all strive for a better tomorrow. Some of us are still students, some already work. We all wish to be good at what we do, to have enough time for our loved ones and gain happiness from our other interests as we do from the music we create.

13.Before we wrap up this interview, do you have any final words or thoughts?
Music is something that comes from within. It's like a voice of our soul and as long as you're true to it, it can grow and blossom. If you write what you feel and really work from within, your music will definitely touch other’s hearts. So, every musician should stay true to themselves and let their soul blossom.
Also everyone has his or her own path of life. We wish them all to find it and to follow it without any doubt. Just follow your star and you'll find what you are looking for.
Beside this thoughts, we wish that people would enjoy listening to our music. J

Posted by OccultBlackMetal at 3:08 AM No comments: 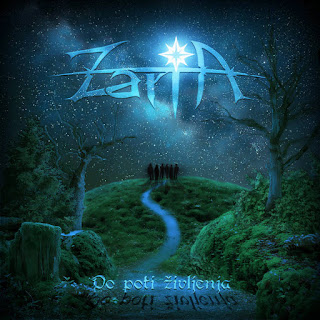 Female  vocals  bring  a  very  melodic,  clean  and  operatic  feeling  to  the  recording  and  the  solos  and  leads  that  are  utilized  bring  in  a  great  amount  of  talent,  skill,  melody  and  traditional  metal  influences  into  the  bands  musical  style  and  all  of  the  musical  instruments  on  the  recording  have  a  very  powerful  sound  to  them.

Zaria  plays  a  style  of  folk  metal  that  is  very  symphonic,  heavy  and  melodic  sounding  along  with  a  touch  of  black  and  death  metal  which  adds  a  bit  more  aggression  into  the  music,  the  production  sounds very  professional  for  being  a  self  released  recording  while  the  lyrics  are  written  in  Slovenian  and  cover  Epic  Tales,  Journeys,  Freedom  and  Folklore.

Posted by OccultBlackMetal at 7:37 PM No comments: