Hi. This is Thomas, the singer. First of all, thanks for the interview and the interest in Aeveron.

It is now three weeks that our new album has been released and so far the response from fans and the press have been overall very good. Our release party was also very successful and we could sell a good amount of the new record.

Apart from that, we are still searching for a second guitarist and a keyboard player as well.

The music on „VVD“ is basically not differing very much from past releases. But I would say that it is more or less sounding as if made from one piece. This is mainly because the songs were written by our guitarist Jens. Our past records as well as our new record congregate lots of different musical influences which sometimes makes it hard for listeners to discover a common theme. But I think the new record sounds more homogeneous.

3.While the band is from Germany, sou still refer to your musical style as 'Melodic Sweden Death', can you tell us a little bit more about this term?

We have agreed on that term since mainly all members in the band like the Swedish Death Metal scene, especially the one from the late 90s. So, lots of influences can be heard in our songs. That's why we have decided to use that term as a broad orientation since the stereotypical thinking is indispensible even in the Metal scene today.

4.This is the first album to be released in 4 years, can you tell us a little bit more about what has been going on during that time period?

These four years were characterized by a lot of changes in the band. I, for one, moved to the south of Germany in August 2011, shortly before the release of „Impending Doom“. So, I have not always been able to join the rehearsals. Unfortunately, in September 2012, both our guitarists Matthias and Alex informed us that they would leave the band for personal reasons. This was a hard time for the rest of the band and we really thought about quitting the band completely. But thankfully we could find a competent and very talented guitar player in Jens. He joined our ranks in November 2012 so we were able to continue the band.
So, we began writing material for our new album back then.
Things went really well and we played several gigs in 2013 and the song writing also went pretty good, when suddenly, in March 2014, our keyboard player Markus, who was a founding member of Aeveron, told us that he would leave the band.
We were devastated because over the past 12 years we had seen guitar players come and go but we had never played live without a keyboard before. That was a pretty challenging thing for us.
But we decided to continue with the band. Markus thankfully contributed the keyboards on our latest release “VVD – Destination Annihilation”.

5.What are some of the lyrical topics and subjects the band explores with the newer music?

The new record mainly deals with the eternally destructive and greedy nature of mankind. „VVD“ stands for „Venimus, Vidimus, Delevimus“ which means „We came, we saw, we detroyed“. Most of the lyrics on the new record explore aspects of mankind's behaviour throughout its existence and its inevitable destiny – annihilation.

6.What is the meaning and inspiration behind the name 'Aeveron'?

„Aeveron“ is a complete fantasy name which was created by our former guitarist Kay. It is the realm we are living in when making music.

We had some pretty good shows pretty small clubs in Eastern Germany, i.e. in the Hagalaz Club in Elterlein together with Manegarm, Skyforger and Goddess of Desire in 2005. The gig on the newcomer stage of Metal Camp in 2010 was also a pretty nice experience although there were almost no people in front of the stage. Our performance is pretty normal I guess. :-) Headbanging and having a good time with the audience.

We are not planning a tour at the moment although that would be a great thing to do. But, we are all working fulltime, so a tour is not possible at the moment. But, if someone wants to invite us for a small tour, we are definitely interested. The next live show is confirmed for September 2015 in Plauen.

9.The new album was released on Battlegod Productions, can you tell us a little bit more about the deal you have signed with this legendary label?

There you are misinformed. I don't know who spread this rumour but it's definitely wrong. Our new album was self-published. We released „Existential Dead End“ on Battlegod, but after that we did not cooperate anymore. So, I hope that this false info will soon be cleared up. Battlegod did not publish „VVD“.

10.On a worldwide level how has the feedback been to the newer music by fans of melodic death and black metal?

As I have already said above, the new record „VVD“ was received quite well among the fans and the press. We are pretty satisfied with the response so far and hope that a lot of people buy our albums and come to our shows.

11.What is going on with some of the other bands or musical projects these days that some of the band members are a part of?

I think that you mean our drummer Paul. He is the only one involved in other musical projects. But since this interview is about Aeveron, I will not talk about his bands. Maybe you should do an interview with him in the future. :-)

12.Where do you see the band heading into musically during the future?

Well, let's see where our inspiration leads us. But I think that our style will not dramatically change. It will more or less stay the same since this is the music we like.

13.What are some of the bands or musical styles that have had an influence on your newer music and also what are you listening to nowadays?

A big influence are the Melodic Death bands from Scandinavia, like Arch Enemy for instance. Jens is a huge fan of them. Also, Black Metal is an influence for us and of course traditional Heavy and/or Power Metal. So, the musical input is rather widespread.

I can now only speak for myself. I like to read, mainly horror or crime fiction. I like horror and fantasy movies and tv series like The Walking Dead or American Horror Story. Our bass player has a dog. So, that's his non musical interest, I guess. ;-) So, pretty normal things.

Again I would like to say thank you for this interview and the interest in our band. Check out our our new record „VVD – Destination Annihilation“. You can order it on www.aeveron.com or on iTunes, Amazon, Spotify or Google Play.

Posted by OccultBlackMetal at 9:43 PM No comments: 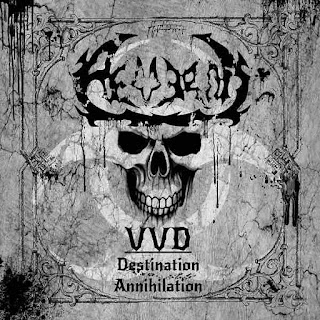 A  very  heavy  and  melodic  Swedish  influenced  death  metal  sound  starts  off  the  album  along  with  some growling  vocals  a  few  seconds  later  and  the  solos  and  leads  also  use  a  great  amount  of  melody  and  you  can  also  hear  clean  singing  being  added  into  certain  sections  of  the  recording  and  there  music  also  brings  in  symphonic  sounds  at  times.

Aeveron  plays  a  very  melodic  musical  style  that  goes  back  to  the  90's  days  of  Swedish  black  and  death  metal  but  done  with  a  more  modern take  on  those  genres,  the  production  sounds  very  professional while  the  lyrics  cover  Ancient  battles  and  Inner  Struggles.

Posted by OccultBlackMetal at 3:17 PM No comments: