Mortis Cruentus was born in 2003 under the name of "Dark Wood", placed on Alicante (Spain). In those early days, the band used to play raw Black Metal without any serious pretentions. The band began to grow and after more than fourteen years of career, a lot of changes in the line-up, and many good live gigs, we'd reached a personal and mature identity into our local metal scene.

On our first serious release, "Agony as Doom" (2009 LP), we collected the best songs from the first six years of the band. You can find a lot of diversity among the tracks, from some Black/Death Metal songs till Melodic Death patterns, always mixed with some melodies but reflecting the lack of an identity mark. Of course its a good album with some cool ideas.
The 2013 EP "Winter Holocaust" was like a gap union between past and the actual sound.
And our brand new LP "Hellthrone" is more solid into the Blackened Death Metal, with some structure changes and melodies, where we tried to make some extreme metal without boring repetitions and blast-beats excess. We are looking for a good sound without the overproducted actual trends.

3.The band has been around since 2003 but only put out a release once every few years, can you tell us a little bit more about the gap in between releases?

We like to rehearse and play live, our composition process its too slow and we're too perfectionist when finishing a song. We've got a lot of discarted songs also. Hellthrone is the goal of almost eight years and we're very glad for it.

We started with war themes, with blood and death lyrics but "Hellthrone" it's a conceptual album. Tells an entire story through the 13 tracks about the "Demonic Veil", a parallel universe where thousands of demons live and humans cannot see. The whole story was created by Jabo Garcia, our guest voice for this recording.

5.What is the meaning and inspiration behind the name ;Mortis Cruentus'?

The meaning is "bloody death" in Latin language, and it fits perfectly our philosophy, it mixes death in Death Metal and  blood from Black Metal. The use of Latin language could be the melody.

We are very proud of having shared stage with some bands that we admire and follow like Stormlord, Finsterforst and many more, but the bests live shows we've given were on the south side of our country, where the crowd feels metal in a different way, more insane, and this feeling makes a live gig greater like a metal feedback power from both sides.
We are now working on our future live performances, we want to transmit all the power and anger included in "Hellthrone". We'll try to introduce the audience into a demonic journey without any dull moment through the whole show. This will be our next goal.

Like an underground extreme metal band, we're not working with management agents or labels, and today it's complicated to schedule a live tour by our own. We always worked by direct contact with the other bands and promoters and now we're on promotion process and looking for new dates to show how Mortis Cruentus kicks "Hellthrone" on stage. At this moment we've got two confirmed dates, february 24th with the Black/Death metallers Noctem and May 4th with Incursed and Nethertale, both shows in our hometown Alicante.

Well, this is a difficult question, because it's a closed circle where the band are moving on, the local Black/Death underground movement. It's true that today with this hyper-connected world we can reach  many people. We are very glad to had received greetings from Russia, Croatia, England and other foreign countries . From our official page, anyone can buy our material from everywhere without problems and this is a great advance.

Yes, we are playing in other projects at this momment. Our drummer Dani and the vocalist Manthor, are both in "Metaphilia", a Deathcore Metal band from Alicante (Spain). The guitarist Toño is also playing at a Symphonic Metal band from Alicante called "Oblivion's Garden", and the last adition at guitars Savage Jouretz have a solo project of Death Metal.
Band members have got different music tastes and that enriches our own music.

We are focused on the new release presentation, but maybe the musical aspects of "Hellthrone" succesor will be faster and exploring new technical venues always respecting our style of mixing Black with Death patterns.

At the beginings of the band, the original ideas were mixed with great influences from Black Metal bands like Cradle of Filth, Stormlord, Dimmu Borgir or Graveworm, which were our favorite bands at these years. The maturity of our compositions comes from letting in new influences from another metal styles, like Progressive or Death Metal, building the basis of our actual music.
Today we listen to multiple different kinds of music but Black Metal it's always our main way of live music.

Music its one of the best ways to escape from daily problems, relax and share good moments with friends.
For non musical, travel and enjoy with a good beer and company more music.

First of all, thank you so much for this interview, we hope you like it. We would like to show our new work to greater audience, we worked hard and the final result we think its good enough, give it an opportunity with a relaxed hearing, letting the narrative and music embrace you, entering in a new demoniacal dimension, the "Demonic Veil" and being witness of this Hellthrone battle. The gates of hell are finally open...
Visit www.mortiscruentus.com for further information, live dates and take our material.

Posted by OccultBlackMetal at 12:22 PM No comments: 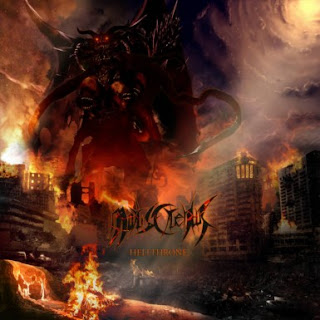 Dark  sounding  synths  and  demonic  voices  start  off  the  album  while  spoken  word  parts  can  also  be  heard  briefly  before  going  into  a  very  fast  and  melodic  musical  direction  which  also  brings  in  a  great  mixture  of  both  black  metal  screams  and  death  metal  growls  while  all  of  the  musical  instruments  have  a  very  powerful  sound  to  them.

Mortis  Cruentus  plays  a musical  style  that takes melodic  black  metal  and  death metal  and  mixes  them  together  to  create  a  sound  of  their  own,  the  production  sounds  very  professional  for  being  a  self  released  recording  while  the  lyrics  cover  blood,  war,  death  demonology  and  occultism  themes.

Posted by OccultBlackMetal at 9:10 PM No comments: