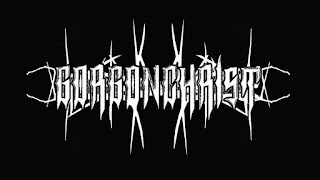 Imagine the sensation of maggots eating your eardrums from the inside. No matter how many times you smash your head against the wall you can't get them out. You're desperate, wildly insane and there's nothing you can do but to keep viciously thrashing your head into a bloodied pulp. That's Gorgonchrist.

The Blood of Endangered Species is a chaotic album, both in the blend of disparate noises and in its execution. We didn't set any goal of how it should sound, we just knew we wanted to create something different and of the moment we found ourselves in. Something fluid and without predefined form. The closest approximation we can think of for its eventual style is post-industrial black sludge. Make of that what you will.
It definitely stands outside of conformity and pisses on the Alamo of traditional song structure. We feel there's something for everyone in this, even those who enjoy maggots in their ears!

3.Both of the band members are also involved with other bands and musical projects, what is it that you bring into the music of 'Gorgonchrist', that you are not able to do with your other groups?

Being able to touch each other. There's a lot of touching going on during our latest album. You can really hear it in the mix. In reality though it's natural to bring elements of your past work with you, the question is whether you're able to use the past to inform process and progress or just stick with a known formula and let the past repeat itself in ever more dilute form. There are no boundaries in any of our bands or other projects that prohibit experimentation. We just felt the time was right for us to do this, it had been building in us for quite a while, and it wouldn't sit right being released under anything but Gorgonchrist.

4.What are some of the lyrical topics and subjects you have explored so far with the music?

A lot of it really tries to get to grips with the thorny topic of crop rotation in the 14th century. We feel it has never been resolved despite the tireless efforts of school kids throughout the UK studying it for endless wasted years.
Beyond that this album is a snapshot of an angry disillusioned and lost populace. We're looking at the world here, not just the UK. We are so close to having global unity yet, through the rise of petty nationalism, we've never been in such danger of losing it all. The worldwide humanist revolution will never happen. Greed and stupidity will end the human race. The ferocious anger of this album feels a very rational response to something as senseless as that.

5.What is the meaning and inspiration behind the name 'Gorgonchrist'?

Gorgonchrist is an entity comprised of many things. The name suggests a smashing together of cultures: something that can make us, as a global community, stronger and will be the saviour of the ecological crisis we face and need to tackle cohesively. But there remains this fear of imagined monsters (terrorism, immigration, loss of national identities) which keeps us clinging to division. This will only lead us further into failure. Who imagines the monsters that divide us and to what ends? Sadly we all know the answer to that. Will it ever change? Again, we all know that answer too. We've already lost the paddles and the boat is quickly sinking. As such Gorgonchrist is entropy without brakes.

The Penny Black is an iconic image and represents what we were trying to achieve in many ways. It is a rarity and somewhat bleak in its appearance. The royal connection of all postage stamps in the UK only serves to remind the population that social divide continues to exist. This was an early representation of global communication and, in some ways, the beginning of the end….just like Gorgonchrist.

7.Currently there are only 2 members in the band, are you open to expanding your line up or do you prefer to remain a duo?

Certainly for the writing and production of Gorgonchrist it will remain a duo. Whether we expand the live line up is another matter altogether. What form that might take we don't know yet but its doubtful you'll see this in the standard band format.

8.The new album was released on 'Clobber Records', can you tell us a little bit more about this label?

Yeah, Clobber is a great UK underground label that is really beginning to make its mark on the scene. They are fantastic people with a real hunger and drive to support bands in the extreme metal scene in particular. They approach things in a DIY but well organised way and show such passion about the projects that they invest in. Their roster is building fast and, for a band like Gorgonchrist, it seemed like the perfect fit at this point.

9.On a worldwide level how has the reaction been to your music by fans of industrial, black and sludge metal?

So far we've had a healthy reaction to a truly unhealthy product, much like cigarettes. We're fairly sure Gorgonchrist will be equally addictive but minus the carcinogenic downside. Some have suggested our album should feature health warnings but we'll wait for the government to intercede on that one.

Into further levels of decay, literally oozing its constituent parts into a black sludgey stain on the ground. How that decay sounds will remain unknown until it happens. This could go anywhere is the reality. Whether it will retain the seething anger of its outset, who knows. There might be more polka and flamenco on the next album though.

Harry Ramsden's fish shop quartet have been a huge influence along with bands such as Anaal Nathrakh, Ministry, Napalm Death, Blut Aus Nord, Fukpig, Subhumans, Voivod, Extreme Noise Terror, Primitive Man. Our current playlist heavily features the phenomenal rise of UK Black Metal, something we feel is growing into an ever more powerful scene. There really is a huge plethora of outstanding music being created over here at the moment.

If anyone has any internal organs for sale, get in touch.

Posted by OccultBlackMetal at 5:03 PM No comments: 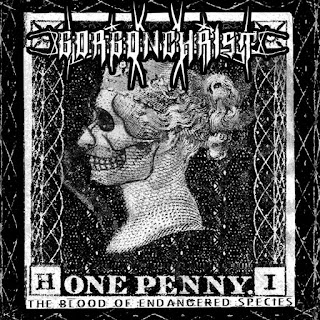 A  very  dark  and  heavy  intro  starts  off  the  intro  and  also  introduces  spoken  word  parts  and  elements  of  noise  onto  the  recording.  Vocals  are  mostly  grim  black  metal  screams  while  the  slow  riffs  are  very  heavily  rooted  in  sludge  metal  along  with  programmed  beats  bringing  in  more  of  an  industrial.