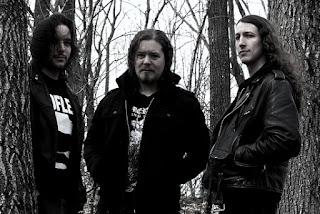 1.For those that have never heard of you before, can you tell us a little bit about the band?
We are a Wisconsin based metal band trying to combine meaningful lyrics with music that still has the aggressiveness of extreme metal.

2.So far you have released 2 albums, how would you describe the musical sound that is presented on both of the recordings?
We have had the pleasure of recording with Shane Hochstetler at Howl Street Recordings in Milwaukee for both of our albums. He has helped us achieve our goal of creating a raw, yet defined sound. Musically, we are fans of many metal genres and wanted to create a sound that is not limited to the confines of one genre.

3.What are some of the lyrical topics and subjects the band explores with the music?
Our lyrical themes revolve around personal and societal unease with a hint of supernatural pondering.

4.What is the meaning and inspiration behind the name 'Uhtcearu'?
Uhtcearu (oot-key-are-oo) is an Anglo-Saxon word that translates to pre-dawn anxiety or nighttime sorrow.

5.What are some of the best shows that the band has played so far and also how would you describe your stage performance?
Well we are currently driving through Ontario to our first date on the Rite of Passage Tour, so are expecting these will be some of the best shows we have played as a band so far. As a three piece, it is important for each member to bring energy to the stage.

6.Do you have any touring or show plans for the future?
Yes, we are in the midst of our first official tour which includes 3 Canadian dates, and 7 throughout the U.S.

7.Currently you are unsigned, are you looking for a label or have received any interest?
Right now we are more focused on developing our sound and gaining experience as a band, but are what open to whatever lies ahead.

8.On a worldwide level how has the feedback been to your music by fans of melodic black metal?
The reception has been great so far, especially with the release of our new album. People seem to react to our music as a breath of fresh air in the scene.

9.What is going on with some of the other bands or musical projects these days that some of the band members are a part of?
Noel, our drummer was just in Europe with Painted Caves, a Milwaukee based Middle-Eastern infused psych-rock band. He also plays in Population Control, which is a thrash band from Milwaukee.

10.Where do you see the band heading into musically during the future?
In the future, we will continue to refine our sound and will not limit ourselves to the patterns set by our previous releases.

11.What are some of the bands or musical styles that have had an influence on your music and also what are you listening to nowadays?
Though we are all avid and dedicated metal heads, our music tastes range from jazz-fusion, pop, blues, hip-hop and Polish folk music.

12.What are some of your non musical interests?
Dustin, our guitar player is a history PhD candidate at the University of Minnesota. Zach, our bass player is a craft beer connoisseur. Noel, our drummer jogs occasionally.

13.Before we wrap up this interview, do you have any final words or thoughts?
Thank you to everyone who has listened to and supported our albums. We greatly appreciate the growing fan base we are cultivating. Cheers!

Posted by OccultBlackMetal at 7:57 PM No comments: 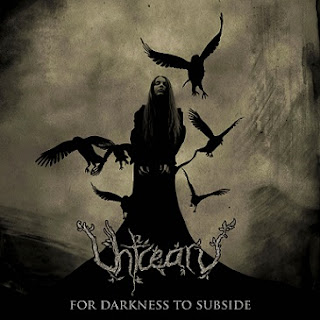 Uhtcearu  plays  a  musical  style  that  takes  melodic  black metal  and  mixes  it  with  death  metal  to  create  a sound  of  their  own,  the  production  sounds  very  professional  for  being  a  self  released  recording  while  the  lyrics  cover  dark  and  philosophical themes.

https://uhtcearu.bandcamp.com/album/for-darkness-to-subside
Posted by OccultBlackMetal at 7:16 PM No comments: