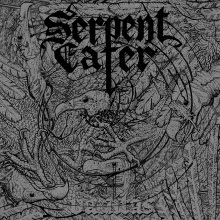 Influences  of  crust  and  hardcore  are  also  added  into  some  parts  of  the  music  as  well  as  some  of  the  riffing  also  adding  in  touches  of  black'n'roll  along  with  the  two  closing  tracks  being  very  long  and  epic  in  length.  The  production  sounds  very  professional  while  the  lyrics  cover  psychic  deformation,  despair  and  misanthropy  themes.

facebook • bandcamp
Posted by OccultBlackMetal at 12:57 AM No comments:

1.For those that have never heard of you before, can you tell us a little bit about the band?
All of us did play or still play in other bands and projects which focused on extreme music. However, we all felt, that there is something, that wanted and needed to be released and urged all of us, to help. It is something dark, vile and savage. So, obviously, it was the Serpent Eater, who wanted us to come together in late 2011/early 2012 to be his messengers. Before the Serpent Eater approached us, we hardly knew each other.

2.How would you describe the musical sound that is present on the album?
Well, the Serpent Eater commanded us, to create aggressive, gloomy and dark music, to support his messages. So, in order to fulfill his will, we mixed up everything that helped us, to do so. Regardless, what musical genre or type of this would be, as long as the sounds and riffs, pleased the Serpent Eater.

3.Can you tell us a little bit more about your song lyrics?
Here, the Serpent Eater is quite clear. Lyricwise, he wants us to let the people know, how he is influencing, pressuring and deforming the mental health and sanity of the souls of all of us, as he takes over our world and reality…

4.What is the meaning and inspiration behind the name Serpent Eater?
It was not our idea and it is not about us to question this…. The Serpent Eater is an entity of grant anger an little patience. But don’t you worry, you will learn more about him, soon.

5.What are some of the best shows that the band has played over the years and also how would you describe your stage performance?
As all our shows are services to worship the Serpent Eater, it would not be wise, to name one of these rituals and masses as the most outstanding. He forces us to always give the best we can.

6.Do you have any touring or show plans for the future?
We’re about to slip onto some billings of festivals such as the Slow End Festival in Eindhoven, Alerta Deathfest in Hannover and the St. Helena Doom Fest in Munich in May 2014. The Serpent Eater wants us to reach as much people and future servants, as possible…so there will be more soon.

7.The new album came out on Alerta Antifacista Records, do you few this label has done a lot to get your name out there/
Alerta Antifascista  Records is the right platform to the Serpent Eater, as he wants  to recruit his first servants from a public and audience, who is more or less ready and willing  open themselves to him…


8.On a worldwide level how has the feedback been to your music by fans of black, doom and sludge metal/
Well, although the first real Album “Hyena” will only be released on December 15, 2013, the feedback on ‘Hyena on worldwide level is surprisingly good. So far, all reviews we read,  are awesome. Well, actually, it is not that surprising, as we are supported by a supernatural  force….

9.What direction do you see your music heading into on future releases?
Wherever the Serpent Eater may lead us to, we will follow. At the moment, it is hard to foresee, in which musical direction we will be led… Anyway, we’re quite sure, that it will not be some happy stuff, as the Serpent Eater dislikes the sunnysides…

10.What are some bands or musical styles that have influenced your music and also what are you listening to nowadays?
As mentioned above, we do listen to merely music to gather influences in order to fulfill the sinister will of the Serpent Eater. So the majority of stuff we listen to ranges from Death and black metal to (post) hardcore, crust, heavy and dark 70s rock

11.Outside of music what are some of your interests?
There is little room left to do something else, if you are subject to the Serpent Eater. Well, we do have several addictions, as we need to cope with this situation.

12.Any final words or thoughts before we wrap up this interview?
You better be scared, as the Serpent Eater is coming for you….

Posted by OccultBlackMetal at 2:27 PM No comments: 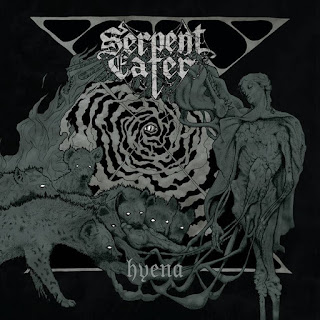 "Lietmotif"  kicks  with  some  mid  paced  crust  crust  guitar  and  bass  riffs  along  with  drums  and  high  pitched  screams  before  adding  in  some  deep  growls  and  halfway  through  the  song  the  music  goes  into  a  faster direction  along  with  some  blast  beats  and  then  slowing  down  again.

"Trepanation  Nation"  which  is  also  the  last  song  begins  with  heavy  black  metal  guitar  riffs  before  adding  in  bass,  blast  beats  and  high  pitched  screams  and  then  slowing  down  and  adding  in  melodic  crust  elements  as  well  as  alternating  between  fast,  mid  paced  and  slow  parts.

Posted by OccultBlackMetal at 8:30 PM No comments: