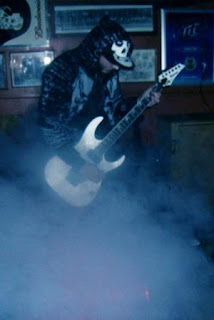 1. Can You tell us a little bit about your project for those that are not familiar with your music?
Speaker Ritual itself came to be by default. I am the soul creator for the Black Metal band Ssenkrad. During the summer of 2009, Ssenkrad was on a sort of hiatus. I had created many intros and outros for the past and present Ssenkrad albums. While reviewing said Intros/outros, I began to listen to them differently, and fortunately became a starting point to creating more of the like, hence Speaker Ritual was born.

2. Where did you come up with the band name?
I have always been a fan of Drone, Sunn))), Boris, Earth, just to name a few. There was a Boris record called Amplifier Worship, I thought that was a stellar name for a band. I was afraid that if I used that title people would think I was riding the coat tails of Boris. So basically I used the same meaning, just different words. But Speaker Ritual is just that really, using the speakers as a forum to produce music for a form of invocation/conjuration of the song titles. Feelings, and places, realms so to speak. Not words and music, like eddie and the cruisers movie stated.

3. What is it that you are trying to accomplish with this project that you cannot do with your other band?
Alot of it has to do with the fact that when I was young and my mother let me watch Suspiria(Dario Argento)The music to that film scared the shit out of me. Of course others came along, John Carpenters own produced audio for Halloween and Precinct 13, to name a few. Those audio soundscapes took me somewhere, not like regular music, it gave me feeling, not just happiness or anger, but like a story was written in music form, and I could take it or it could take me anywhere it wanted to. They had so much presence. So I look to do those same things as well. If you read every title of a Speaker Ritual song, they mean something. Google them in your spare time, and you will learn the meaning behind every song that has ever be created.

4. How have your live shows been so far?
My home town has no scene at all for this style of music. Fortunately I've been excepted at alot of the College towns, because of there favor of ambient and noise/drone. So far I've played alot in Athens Ohio(Ohio University) the people except me, the clubs and bars except me as well so its been righteously received Their is more of a draw because of the diversity.

5. What are some goals that you have set out for this project?
Personally, I've never enjoyed producing/creating music more then I do for Speaker Ritual. I think I would fit in quite nicely opening up for Sunno))). But in lower more realistic expectations, I would like to be comfortable creating music for a certain fanbase that I could continue and make my sole aspiration in life. It would be nice to have Speaker Ritual be a full time job, it's that fun....

6. o you have any touring plans?
Right now I dont promote, so I take what ever is offered. Basically I get emails, and I show up.

7. According to your Myspace page you direct some movies and have a company dedicated to movies, what are some films that you have directed and how would someone be able to get ahold of some of them?
Film was my original muse, during early 2000 I made a few movies. They were mainly made for the sole purpose of friends and people in my home town, I've never tried to market them. I've made in the past a cartoon, dark evil stick style to live audio entitled "Born into Submission", a black and white silent live action film entitled "EVOL" and a series of compilation films entitled "Snuff Fuck" I currently have two Vols. Unfortunately I cant really advertise those, they are very graphic in nature. The series really took off for a while. For example, I would talk to someone on the internet about it and send them a copy, and with in a few days I'd get 50 emails stating that so and so showed them this sick ass film with reality death and porn mixed together, and wanted to know how to buy a copy. What can I say, faces of death had a huge barring on me as a child. You can see the trailers for the first two on the 60060 sixscore myspace page, but the Snuff Fuck, would be by mail order only. I guess if anyone was interested they could just message me.

8. What are some of the influences for Speaker Ritual music wise or non music wise?
First and foremost Goblin, the main staple of all Dario Argento films. They are a great ambient band from Italy. Sunno))), alot of people seem to see a connection there, recently I was told it reminded them of Abruptum? Maybe Danzig's Black Aria, and Burzum's Daudi Balders and Hildga...what ever? Early Boris, and Earth to name a few. But the biggest influence is my home town and county I live in. It is so rich in history and infamous characters(Mansfield Ohio/RichLand County) every song written so far has been a concept of said people or places with a story inter twined.
9. How has the feedback been to your music so far from extreme music fans worldwide?

I get the most praise from the Black Metal community, but some are Drone fans as well. People into the same things as me mostly.

10. Out off all the releases that you have done so far which one are you the most satisfied with?
So far the only Speaker Ritual album available is "Misteri Di contea di Richland" it is a concept record regarding any and all famous and infamous histories surrounding Richland county. Like I said before, google the names from the titles, to get a better understanding of what it is to be invoked. I'm close to finishing part 2 of Misteri...it should be ready by April.

11. Have you received any backlash from fans of your other band that expect to hear the same thing over and over with?
Not at all, most of them send praise. There has not been any limitations or expectation set.

12. What direction do you see the music heading into on future releases?
Hopefully a more international audience were I can concept worldly happenings instead of soley representing my home town.

13. Any final words or thoughts?
Speaker Ritual creates a feeling that represents reality, not fiction. There are no fairy tales, everything is 100% real. Search what is given, then feel what was written......

www.myspace.com/speakerritual
Posted by OccultBlackMetal at 9:00 AM No comments: