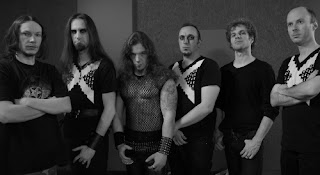 1.For those that have never heard of you before can you tell us a little bit about the band?
We are a symphonic blackened metal band from Nantes (France) composed of six members: a singer, two guitarists, a keyboard player, a bassist and a drummer. We have a strong historical concept and aim at playing melodic and powerful riffs.

2.In January you released a full length album, can you tell us a little bit more about the musical direction of the new recording and also how does it differ from the demo you had released in 2012?
«Cathartic» is a concept album about the events that occurred during the albigensian crusade in the beginning of the XIIIth century. Each song depicts a specific topic and therefore the musical flavor differs from one to the other. So basically, we have a symphonic/melodic blackened metal basis mixed with different elements: heavy (Béziers), folk (Ego te Absolvo) and even progressive (Dominic and the Perfect). The EP was a first step towards the album. Indeed, the album contains the four songs of the demo. They were re-recorded and remixed however.

3.Can you tell us a little bit more about the lyrical topics and subjects the band explores with the music?
Our main point was to propose historically accurate lyrics related to the subject of our album (that is the albigensian crusade). Each song deals with either historical facts (Béziers or Augustus), more philosophical topics (Church of the Wolves, Gnosis) or even personal thoughts of specific characters (The Inquisitor, Ego te Absolvo). It was important for us to keep a balance in the points of view and hence to introduce the positions of the different sides: cathars, crusaders, inquisitors, the king of France, etc. 4.What is the meaning and inspiration behind the name 'Ad Extirpenda'? Ad Extirpenda is the name of a papal bull published in 1252 by pope Innocent IV. It allowed and defined the use of torture by the inquisition.

5.What are some of the best shows that the band has played over the years and also how would you describe your stage performance?
We had a great time last year playing with Seth and also really enjoyed the couple of shows we played with Lord Shades and Entropia recently. Concerning our stage performance, we are currently working on improving the theatrical impression while keeping the energetic side. We have worked to design a consistent, balanced and efficient set-list and are very pleased to see that the audiences really enjoy it.

6.Do you have any touring or show plans for the future?
We have a couple of shows already scheduled and are planning a tour for the season 2014-2015. Concerts organizers are welcomed to contact us if they are interested in having us in their shows.

7.According to the Metal Archives page, the band was formed in 2008 but waited for years to release anything, can you tell us a little bit more about the gap?
The songs from our album were written in 2007 and 2008 and in the beginning, the band was mainly formed with the objective of recording them. As time advanced, we decided to go one step further and began to have regular rehearsals. Then, our first bassist and singer had to leave the band due to professional reasons, so our actual line-up only became operational in the end of 2012.

8.Currently you are unsigned, are you looking for a label or have received any interest?
We are searching a label and had a few contacts with small ones but it is mainly a distribution issue at this point. Nowadays, it is possible to record and produce one's own CD without ruining oneself. So, we didn't look for a label at first.

9.On a worldwide level how has the feedback been to your music by fans of symphonic black metal?
Up to now, the feedback mainly comes from europe, but it has been really good. Indeed, we were also pleased to have good feedbacks from people who are fans of other metal genres.

10.What is going on with the singer's other musical project these days?
It is not active anymore, so he's fully concentrated on Ad Extirpenda.

11.Where do you see the band heading into musically during the future?
We have begun to work on the second album which will deal with the first crusade. As you can guess, we really want to retain a strong historical background. This time, we will include a couple of longer songs which are not intended to be played live but are essential for the atmosphere of the album. Aside from them, we intend to keep our musical direction.

12.What are some bands or musical styles that have had an influence on your music and also what are you listening to nowadays?
There are a lot of influences in our music. One of the most obvious may be Moonspell (and their side-project Deamonarch) for their eclecticism and the very specific mood they are able to create. Bands like Arcturus, Borknagar, Vintersorg and Dimmu Borgir were also huge influences as well as Death, Dark Tranquillity and Iron Maiden of course. There are also non-metal references such as classical (Bach, Mahler) and jazz-rock (Return to Forever, Weather Report) artists. One of the strengths of our band is that we are listening to different kinds of music from one another so it will be difficult to draw a list of what we are listening. Though one edge of touring is that it is easier to discover bands, which is a great privilege since there are a lot of little gems which do not have the promotion they deserve.

13.Does Occultism play any role in your music?
Only marginally, the historical part of it mainly.

14.What are some of your non musical interests?
History and philosophy obviously. Aside from this, maths, at least from some of us.

15.Before we wrap up this interview, do you have any final words or thoughts?
We are currently working on our first videoclip which will be available at the beginning of next fall. For the occasion, a remix of Augustus was performed at Vamacara Studio.Finally, we are always pleased to have constructive discussions about our music so anyone wishing to do so is welcomed to contact us.

Posted by OccultBlackMetal at 4:37 AM No comments: 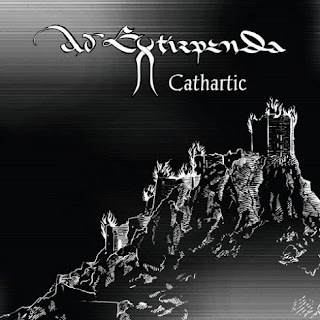 The  album  starts  out  with  a  very  symphonic  sounding  intro  and  after  the  intro  the  music  goes  for  a  more  modern  and  heavy  sound  while  also  keeping  around  the  symphonic  elements  as  well  as  adding  in  more  black  metal  screams  and  melodic  riffing  and  after  awhile  powerful  bass  guitars  and  solos  are  added  into  the  music  and  they  also  bring  a  progressive  feeling  to  the  recording.