- Right now we are going promotion for the re-issue of the Hybrid album, we are rehearsing for concerts and we work on new material we hope to release during 2017. We are not living as close as we used to do before, so things take a bit more time, but we are in rush and do things the way we find most comfortable for us.

2.You where broken up for 5 years, what was the cause of the split and also the decision to reform?

- Personally I just had no fun anymore back then. I felt more like I worked in an office than playing in a band. CD/album sales dropped dramatically and we were not able to tour to be able to weight up for that, so it was better to take a break before we all became enemies. So we split as friends and with no bad blood. Now it feels right to play again. It is less stressful and I think we all feel we have some unfinished business to take care of before we put ourselves to sleep for good.

3.You have evolved with your musical sound over the years starting out with more industrial and thrash while the later material also mixed in a lot of black and death metal influences, can you tell us a little bit more about the decision to evolved with each release?

- Well, in many ways you sum it up pretty good. The thing with Red Harvest is that we have always followed our hearts and never had any rules or belonged to one specific sub genre. That is our strength but also our weakness. So basically we just did what we felt like and of course we got colored of what inspired us and what we went through together at the time. So we have been everything from thrash, to goth, to industrial and black metal.

4.What have been some of the lyrical topics and subjects you have explored over the years with your music?

- Usually it is about paranoia and the darkness within man. No love songs or party songs.

5. What is the meaning and inspiration behind the name 'Red Harvest'?

- The name came up before I joined the band. The guy that played guitar before me came up with it. When I first heard it it gave me associations to bloodshed and slaughtering. Later we also learned that it is the name of a famous detective novel.

- Before we took a break, we managed to do some concerts with some very ambient light and VJ work as a supplement to the music. I was very comfortable with that. But Red Harvest  live is about energy. And the magic the five of us are actually able to create when we get together. So in that case the concert we played in Bergen in 2016 at Blastfest was a very strong experience. It just felt so right.

- We will play if we get offers that are doable/affordable for us. For now the only scheduled concert is the Inferno Festival in Oslo in  2017.

8.On the re-issue you also added a second disc with a more current live show, what was the decision behind making the recording a double album?

- Since it is a remaster of a 20 year old album, we simply wanted to have some bonus material. Unfortunately there are now live recording of Red Harvest back in the nineties, so we had so take something new.

9.'Cold Dark Matter' put out the re-issue, are you happy with the support they have given you so far?

- Yes. The dedication from the person behind this is just awesome.

10.On a worldwide level how has the feedback been to your music by fans of industrial and extreme metal?

- Like mentioned earlier, some people love us and some people hate us. For some it is not industrial enough, for others it is too industrial. or it is not melodic enough. Or, yeah - you name it. But we never made out music to please others than ourselves in the first place. And the results we have come up with from album to album is a result of what the five of us created together at that point. Take it or leave it.

11.What is going on with some of the other bands or musical projects these days that some of the band members are a part of?

- Honestly I am not 100% sure. I think both LRZ and Jimmi write music, LRZ provides sound layers for other bands and artists. Thomas rocks off in a cover band now and then and I play in two bands called K.P Riot Brigade (US) and Gothminister.

12.Over the years your logo was also evolved, can you tell us a little bit more about this concept?

- In the beginning it was written with whatever font available. For Sick Transit Gloria Mundi I wanted a more “cyborg” look to it (that is the one on the Hybrid re-issue).  The latest logo is just a more modern variation.

13.When can we expect new material and also where do you see the band heading into musically during the future?

- I hope we can release something new in 2017. What we have of material so far is quite brutal/industrial, but of course with a human touch like always with Red Harvest. Maybe a bit more complex and challenging than before.

14.What are some of the bands or musical styles that have had an influence on your more current music and also what are you listening to nowadays?

- I like acts like Burst, Ghost, Opeth (oh my gosh, just Swedish bands…), Gojira, Røyksopp, Celldweller … I try to keep up on what is happening, but when there is nothing that catches my interest: Some old Slayer.

15.What are some of your non musical interests?

- I like to train in the forest or in the gym, watch movies and drink red wine!

16.Before we wrap up this interview, do you have any final words or thoughts?

- I am kind of excited to see what we can achieve in the coming years. At the moment.

Posted by OccultBlackMetal at 7:41 PM No comments: 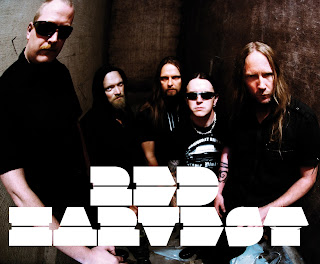 Distorted  drones  start  off  the  album  before going  into  a  heavier  industrial  metal  direction  along  with  some  atmospheric  sounds  in  the  background  and  the  vocals  are  very  aggressive  screams  and  they  also  mix  in  elements  of  the  more  underground  style  of  electronic  music  and  tribal  style  beats  are also  used  at  times.

Posted by OccultBlackMetal at 11:35 PM No comments: