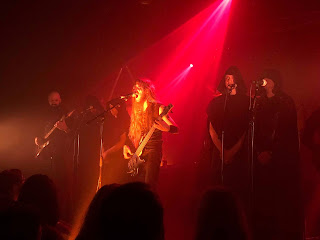 1.Can you give us an update on what has been going on with the band since the recording and release of the new album?
Alex : The new album will be released on the 8th of December 2017, we're preparing a French tour in 2018 and a series of shows along 2018 & 2019.

Cyril : Since we're done with the album, we've been looking for partners to promote and distribute it. We've inked a deal with Dooweet Agency which is in charge of promotion and distribution. Meanwhile, we're searching for gigs – at first in France, then we'll be trying to book gigs in Europe and get in touch with several European festivals.
We're preparing a show for the 13th of January that will be the starting point for the live promotion of the new album.

2.Recently you have released a new album, how would you describe the musical sound that is presented on the recording and also how does it differ from the stuff you have released in the past?
Alex : « The Uprising Of Namwell » is our third album and the end of a trilogy.

Cyril : First, with each album we want our sound to evolve. We try to learn from our mistakes on the previous albums. The toughest point with us is that each instrument has to be audible, the amplified ones (bass, guitars, drums) that are the skeleton of our music, but also the traditional ones (acoustic guitar, accordion, African percussions…) as well as the backing vocals – which for this new album have been performed by a real choir, without samples and electronic stuff. Then, once everything is mixed properly, we have to add to it the orchestral samples, the sound effects and the various sonic atmospheres created by our arranger Olivier PERRIN with whom we've been working since our first album, and who delivers a performance which makes us really proud.
The sound of « The Uprising Of Namwell » may be darker than on our previous album, but it's also more straight forward !

3.This is your first album since 2011 can you tell us a little bit more about what has been going on during that time frame?
Alex : Yes, and the one before that was in 2008. I'd rather have some time running before starting to write new material, to let our tastes and expectations evolve between two albums. In doing so, in my opinion, a new album is inevitably more mature and different from the one before.

Cyril : Like Alex just said, that lapse of time allows us to put things into perspecvtive about what's been done in the past, and release a Lord Shades album which won't be a copy of the one before.
Between these two albums, we've been achieving some plans like playing at Wacken Open Air and Metal Days. We thank these two festivals for their trust. We also did a special show in France at Rock Metal Camp, which allowed us to play on stage with some of our studio guests. It was very interesting to show the audience something else than the average metal band, and help them discovering the human richness of the band.


4.Your lyrics have a concept involving a fantasy world that was made up by the songwriter, can you tell us a little bit more about it?
Alex : We have created the world and the saga of Lord Shades with the help of Laurent Barbarit, who is our official lyricist. He's been writing all of our lyrics since the beginning of the trilogy, we owe him a lot. The only exception on that new one is the choir singing in Latin, which has been written by Hugot Blanchet and the words in Arab written by Sofiane 2under, which he sings himself on the track « The Awakening ».

Cyril : As a matter of fact, all our lyrics are dealing with heroic fantasy. The story has been created from scratch. Laurent Babarit, our lyricist, wrote all by himself the words and the story after common ideas that we're discussing together during meetings about that topic.

5.What is the meaning and inspiration behind the name 'Lord Shades'?
Alex : From the very first chapter of the trilogy, Lord Shades is a ghost locked within his own spell. We can see him sometimes as a dark misty mass, maybe that's one of the reasons why he's called « The Lord Shades ».

6.What are some of the best shows that the band has played over the years and also how would you describe your stage performance?
Alex : Many French gigs and festivals have been amazing experiences, with great reception. But I think that Wacken 2012 and Metal Days 2014 still are the most amazing stages we've shared.

7.Do you have any touring or show plans for the future?
Alex : We're currently working on a co-produced tour for 2018, and looking for festivals in 2018-2019 in order to promote the new album and the whole trilogy as well.

Cyril : The plans for dates and tours are in progress, but it takes time to achieve that. It's hard today to set somehing reliable and serious. We don't want to play gigs that wouldn't be interesting neither for the audience nor for the band. Our goal is to deliver real shows that will transcribe Lord Shades' atmosphere and capture the audience.

8.On a worldwide level how has the feedback been to your music by fans of symphonic black and death metal?
Alex : The response to our second album has been excellent ! We've had a lot of positive reviews, and we can't wait to see how this third album will be greeted. We feel like waiting for doomsday !

Cyril : We don't claim to have reached a worldwide level with the second album, but the feedbacks were really good, from the media as well as from the fans.
Maybe this third album will help us reaching more people in various countries. We are currently waiting for feedback.

9.Where do you see the band heading into musically during the future?
Alex : Anyway, on stage, in a communion with the numerous guests that we had on each album. The idea is to have much more than 4 people stepping on stage ! We tried it once, and we plan to make it again. Lord Shades really comes alive with those guests !

10.What are some of the bands or musical styles that have had an influence on your music and also what are you listening to nowadays?
Alex : Led Zeppelin, AC/DC, Mozart, Benighted, Moonsorrow, Endlaved, Morbid Angel, Pink Floyd, Hanggai, Septic Flesh, Tinariwen… Many different things have an influence on us, all of us 4 have multiple and varied tastes.
Recently I discovered Skalmold live, and I went to see my favorite childhood band Helloween on their Pumpkins United tour.

11.What are some of your non musical interests?
Alex : Nature, country, fresh air… Everything that can be inspiring.

12.Before we wrap up this interview, do you have any final words or thoughts?
Alex : First, huge thanks go to the guests who took part in our albums/demos/gigs, and without whom Lord Shades wouldn't have the same interest.
And last but not least, huge thanks to you !

Posted by OccultBlackMetal at 5:28 PM No comments: 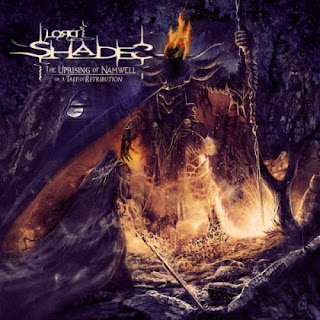 The  sounds  of  people  talking  start  off  the  album  along  with  some  classical  guitars  a  few  seconds  later  before  going  into  a  heavier  direction  along  with  a  great  amount  of  melodic  riffing  while  the  solos  and  leads  are  also  done  in  a  very  melodic  fashion  and  after  awhile  death  metal  growls  are  added  onto  the  recording.

Lord  Shades  plays  a  musical  style  that  is  mostly rooted  in  blackened  death  metal  while  also  mixing  in  some  symphonic  and  atmospheric  elements  to  create  a  sound  of  their  on,  the  production  sounds  very  professional  while  the  lyrics  cover  Fantasy  themes.

Posted by OccultBlackMetal at 5:49 PM No comments: