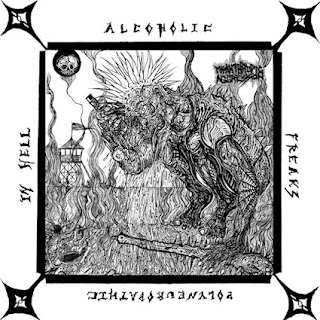 On  this  ep  Misanthropic  Aggression  remains  true  to  the  mixture  of  black, doom,  death,  thrash  metal,  d  beat  and  crust  that  they  established  on  their  previous  release.  The  production  sounds  very  professional  while  the  lyrics  cover  alcohol,  depression  and  sociopathology  themes.

Posted by OccultBlackMetal at 10:55 PM No comments: 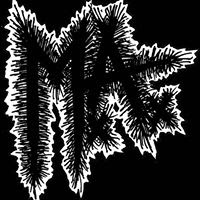 This is the latest step in my lifetime of music creation. I am currently 35 years old and this is the seventh band I've written original music and recorded with. People who knew me before this band knew me as a drummer. I only moved to bass and vocals as a way to push myself and after meeting Tyler, who is only 20 years old and drumming at a way higher caliber than I was at his age. When Chris first decided to commit to the band I was playing drums and he was on guitar. Our two song demo from 2017 only features he and I. Chris engineers everything in our practice room, and on that recording I played bass, drums and did the vocals. Chris played guitar and engineered the sessions. When Tyler joined we decided to write an EP and push hard for Boris Records to release it. Chris works for the label, my old band Spewtilator had two releases on BR, and it just seemed like a natural DiY / Independent move. So we worked very hard for seven months on the material and spent another two months tracking it. Now here we are.

2.Recently you have released an ep, can you tell us a little bit more about the musical style you went for on this recording?

We established a few major ground rules. C tuning so everything we had would be low and heavy. Always black metal shrieks or death metal lows for vocals. Intensity and energy in everything. Other than that there are no rules on metal sub genres. We try to keep it black and I consider us a black metal band. We just add elements of thrash, death, doom and punk. The 80's in Europe were extremely fascinating to me. Between Judas Priest, Iron Maiden, Motorhead, Venom, Celtic Frost, Bathory, Sodom, Napalm Death, Extreme Noise Terror, Amebix etc. the major bases of Traditional Heavy Metal, First Wave Black Metal and Grind / Crust Punk are all covered.

Social unrest, depression, anger, mental illness. I feel like we're living in an age where everyone feels extremely tribalistic and there's a lot of bad attitudes and shitty people who love to mistreat others. I just found myself getting so fucking pissed off every day I needed to express my frustration and rage. I don't feel like I'm alone in feeling fed up, forgotten about, and just generally pissed most of the time. A lot of times my lyrics come from a first person perspective but I'm not writing from my point of view, I'm writing from the point of view of that stupid prick in traffic that just cut you off and gave YOU the finger or the asshole holding up the line on purpose getting lottery when they can tell people are in a hurry. It's the age of anonymous trolling and everyone hates everyone who isn't exactly like them.

4.What is the meaning and inspiration behind the name 'Misanthropic Aggression'?

The rage I feel at hating man kind so much, and the struggle I feel on a daily basis not to assault people and be locked in a cage.

I like guns, I have a few guns, but let's be honest America is obsessed with them. It's a man sacrificed to the alter of the gun. It was drawn by Warhead Art out of Eastern Europe. He caught my eye from my old friend Kael from the so-cal war metal band Wearg, Cavemancult from Miami and Berator from Chicago (Richard and Adam are from my hometown and we go back over a decade) and I love his style. he was nice enough to do a commission piece for us and I asked him to move away from his traditional medieval style. It came out really well. Sam Leyja (Boris Owner and founder) did the layout and I'm really pleased with how it came out.

6.Originally the band was a solo project, what was the decision behind forming a full line up?

I feel like I'll be playing music until the day I die, and as a drummer you always seem to get chewed up and spit out. Always seem to be getting used to make someone else's dream a reality, but at some point things don't work out and you're no longer in the band that wouldn't have been established without you, and you have very little to show for it. I finally decided I would start my own band no one could ever take away. I hope Chris and Tyler never stop playing with me but if they did I would keep the band going. It was like once I freed myself of the burden of being a team player and decided to be selfish I meet this extremely healthy group with Chris and Tyler and don't have to be selfish. It's working out really well.

Probably our Athens, Ga debut with Cloak (more old friends Scott and I go back a decade) it was a huge crowd and a room full of people who have never seen us. We go for intensity and energy live. I go out of my way to head bang and thrash. Black metal is war and even though we aren't a traditional bm band I intended to try to manifest violence, even if it's only against my own body. We have only played 4 shows so far but that is my favorite.

Yes we are open to offers. We are close to announcing a Charlotte show and we are networking to try to get a 9 day run up to NYC and Philly next year. We plan to keep this band active as long as we can.

9.On the ep you had also done an S.S.D cover, what was the decision behind doing your own version of one of their songs?

I love a lot of 80's hardcore, and to me even though that band isn't metal at all, they personified violence and rage on that song. The lyrics feel like something I would write. So at practice one day we were fucking around and tried it in C standard and added a blast beat to the chorus. It sounded violent as fuck so we went for it.

10.On a worldwide level how has the reaction been to your music by fans of underground metal?

I guess like anything some people love us and some think we suck. The punk sound of our music throws a lot of elite black metal guys for a loop. If a dbeat is good enough for Celtic Frost it's good enough for me. If you wanna see me be stupid give me a bottle of whiskey and put on Morbid Tales. I don't think my DNA can allow me to NOT head bang and start single man moshing when Into Crypts of Rays comes on.

11.When can we expect a full length and also where do you see the band heading into musically during the future?

Now that the EP is done we are not slowing down. I'm already into writing a second song, and Chris and Tyler both have ideas too. We're going to let Inability To Cope run it's course for at least a year, and play as many shows in as many cities as possible. We'll probably wait until Boris has enough money for us to do a legit 12" to record again though. We are open to split or comp offers though and would be interested in recording for them if any offers came in. Musically we plan to progress. we're doing what we're doing now but there's nothing to say we won't go more grim in the future. We also love a lot of Goregrind like Impetigo and Lord Gore / Frightmare / Bloodfreak those Portland guys kill it. So really who knows. No rules, as long as it's heavy as fuck and fast. No bullshit vocals either.

Biggest influence on me is Darkthrone. People love to take shots at them because they're the face of black metal, but they have the most dynamic and prolific discography of pretty much anyone. From Soulside Journey to Arctic Thunder those guys just write and do what they want, no matter who thinks or says what. Also Peter Steele and Carnivore / Type O Negative, his sense of black humor was the best. I identify strongly with him. Also Celtic Frost, their first two albums are amazing but Monotheist is one of the most crushing and depressing albums I had ever heard. I guess I wanted this band to be dynamic and not afraid to be unconventional. As much as I love Judas Iscariot I don't guess I would ever want to play "grim" black metal. Not talking any shit at all about the pure black metal bands. I'm kinda rambling now but also Demoncy. Robert is from my hometown and we have a lot of mutual friends, some how I had never seen them live until last year. They played Mass Destruction Metal Fest and they were so fucking heavy. The old shitty recordings they have are great, but live they sounded louder and heavier than a lot of doom bands I've seen. Really inspiring.

I have an almost 5 year old son and wife so a lot of time with them. I'm a PC gaming nerd. You can catch me playing video games a lot more than I should admit. Our song Respite is about how I'm anti social and I don't wanna do anything but sit at home in my basement.

Thank you very much for taking to time to check out our stuff and reach out to us. The support is strongly appreciated. - Jake

Posted by OccultBlackMetal at 5:03 PM No comments: 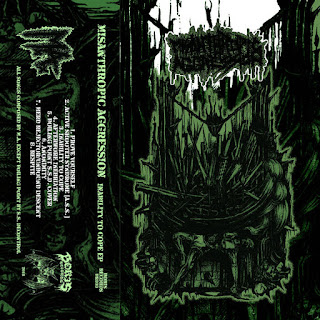 Misanthropic  Aggression  plays  a  musical  style  that  takes  black,  death,  doom,  thrash  metal  and  crust  punk  and  mixes  them  together  to  create  a  sound  of  their  own,  the  production  sounds  very  professional  while  the  lyrics  cover  violent  themes.

Posted by OccultBlackMetal at 5:40 PM No comments: