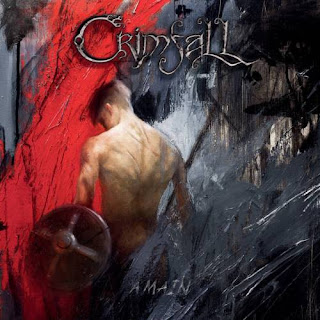 1.Can you give us an update on what has been going on with the band since the recording of the new album?
MIKKO
A lot of waiting for sure. The recording itself took quite some time since we didn't have the label to financially support us and had to use time consuming means to get everything on tape. Then the actual mixing took surprisingly long, but it must have been something to do with hundreds and hundreds of tracks the songs contained. When we finally had the complete album in our hands we approached various record labels and started the negotiations for the deal. And of course the actual release of the album took months. Meanwhile we have been doing few live shows, shooting our first music video and planning for the future.

2.You have a new album coming out during the end of August, how would you describe the musical sound that is presented on the recording and also how does it differ from the stuff you have released in the past?
JAKKE
AMAIN is a beast. It is the most epic Crimfall album so far. It has the enegry of our first album but also the mood and visuality from our second. So it is kind of hybrid but with everything tuned up to eleven.

The songwriting, musicalship, arrangements and the whole production is taken to a complete new level. So, like everyone usually tend to say about their latest work "this is our best album so far"...but it really is... seriously!

3.You label your music as 'epic cinematic metal', can you tell us a little bit more about this term?
JAKKE
Coming up with a term has been a difficult task. We have had a chat about it with all of our record labels and promoters, but we simply cannot cover our music with one term without giving wrong impression about the music. Our material varies a lot by taking inspiration from all the possible sources. But there are few elements which have been present since the beginning of our band. Epicness and movie scores.


4.This is your first full length since 2011, can you tell us a little bit more about what has been going on during that time frame?
JAKKE
Since our previous album "the writ of sword", quite a lot has happened. We were already working on these new songs in 2011 when our previous label had to let us go due to their financial problems. We were alone again.... without anyone supporting us. Because of that we were struggling quite a lot with our motivation and even had a meeting about our future. But as the new album was already written and the demos already sounded pretty impressive, we decided to try one more time... and make it perfect! And as we had to pay everything from our own pockets, we also had to do as much as possible by ourselves... But still invest huge amount of money to the production.

The recording and editing process itself took more than one year from drums to vocals. Mixing all the 1600 tracks to one album took almost half an year. So even if 6 years is a long time indeed, we have been working on AMAIN almost for the whole time. Doing as massive album as this one by yourself (while having a daily job) simply cannot be done any faster.

5.What are some of the lyrical topics and subjects the band explores with the newer music?
MIKKO
One of the themes is facing unsurmountable odds with your back against the wall and coming through that storm a changed man, with tempered new truths. We also want to celebrate freedom in its many forms, rebellion against rules of oppression and outright lies meant to bind your will. This time we are dealing more with contemporary topics than dwelling in the past and myths.

6.What is the meaning and inspiration behind the name 'Crimfall'?
MIKKO
It doesn't really have such a deeper meaning. We wanted a name that wouldn't point too evidently to any genres and wouldn't necessarily carry too obvious meaning. Rather a symbol that raises images and connections from your subconscious. I can say we were thinking of Finnish autumn when ending up with the name.

7.What are some of the best shows that the band has played over the years and also how would you describe your stage performance?
MIKKO
I could mention two highlights. One was the sold out concert in London warming up Turisas where we felt really welcome. Another one was Metal Fest Open Air in Pilsen with an awesome location. But we do enjoy playing in small stinking clubs where the audience is spitting beer in your face. We aim to bring on stage all the visuality and intensity of the music but without cheap gimmicks. Building a journey or arc of drama and contrast with the music.

8.Do you have any touring or show plans once the new album is released?
MIKKO
Few shows have been released but otherwise it seems our plans will be delayed until next year. It is a shame since we are eagerly waiting to get back to the stage to play the new songs.

9.On a worldwide level how has the feedback been to your newer music by fans of folk, viking and black metal?
MIKKO
The first reviews are only now pouring in so it remains to be seen what the final reception will be. So far it has been mostly positive and we have been finding new audiences amongst the people who don't normally listen to this kind of music. Also our music video did get lot of positive feedback and we are excited how it turned out. We wanted something that would really capture the relentless and dismal atmosphere of the song.

10.Are any of the band members currently involved with any other bands or musical projects these days?
MIKKO
I have somewhat darker pagan metal band Draugnim that is actually older than Crimfall but hasn't been able to gather as wide audiences. It is more uncompromising and closer to black metal and I'm extremely satisfied how the latest album "Vulturine" turned out so feel free to keep the name in mind. Helena used to have quite many different projects but to my understanding she will be focusing more on song writing and staying in the background with those. I would imagine Jakke to have other projects at some point but currently he is way too consumed by efforts he puts on Crimfall.

11.Where do you see the band heading into musically during the future?
JAKKE
It is too early to say. All the Crimfall albums are pretty different to each other. As our music comes straight from the heart and is not giving a poo about the trends or public opinion, the sound and style starts to find its form sometime during the writing process. They all represent the era they were written, the music, movies or other sources of inspiration which were playing important role that time.


12.What are some of the bands or musical styles that have had an influence on your newer music and also what are you listening to nowadays?
JAKKE
I'm listening mostly movie scores and classical music. Of course I have been listening to metal music since I was a little bastard, but nowadays rarely find any impressive new albums. So for me movie score have much more to give at the moment.

The story telling and kind of visuality that type of music has is something I try to create with Crimfall as well.


13.How would you describe your views on Paganism?
MIKKO
Paganism to me is most of all source of vehement inspiration, it taps into roots of all archetypes, subconscious gods if you will that resonate vigorously when conjured. One cannot also forget the primeval understanding of man being part of nature and not the king of creation, or even kingmaker with his figment gods.

14.What are some of your non musical interests?
MIKKO
Collecting literature, especially of esoteric nature. Good craftsmanship on drinks and dining. Traveling. Previously I would have said movies but the new golden age of tv-series has changed that a bit. Oh and wrestling drunk in Finnish summer cabin. Jakke hunts, but rarely hits anything.

15.Before we wrap up this interview, do you have any final words or thoughts?
MIKKO
If you feel that our music has given you something, please support it by coming to the shows, sharing our tunes, spreading the word and feeding the flame. 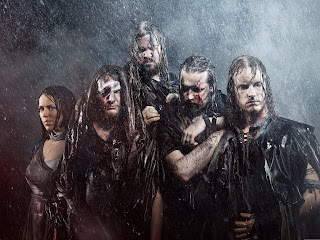 Posted by OccultBlackMetal at 8:56 AM No comments: 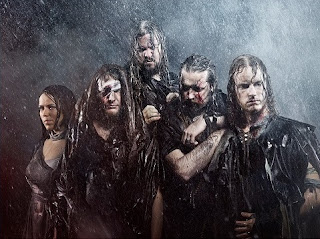 A  very  atmospheric  sounding  intro  starts  off  the  album  along  with  some  spoken  word  arts  a  few  seconds  later  which  also  leads  to  stringed  and  folk  instruments  being  added  onto  the recording  along  with  some  drum  beats,  melodic  male  vocals  and  symphonic  elements  and  female  vocals  are  also  a  very  huge  part  of  the  songs.

Crimfall  plays  a  musical  style  that  power,  folk,  viking  and  melodic  black  metal  and  mixes  together  with  symphonic  elements  to  create  something  very  original,  the  production  sounds  very  professional  while  the  lyrics  cover  Norse  Paganism,  War  and  Anti  Religion  themes.

Posted by OccultBlackMetal at 2:49 PM No comments: