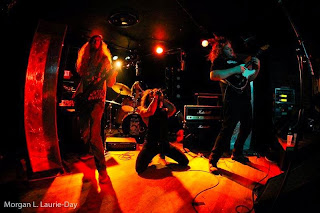 1. Can you tell us a little bit about the band for those that have never heard of you before? We're a four piece band playing psychedelic metal from Vermont. we formed in 2010 right after we all got out of high school. We really enjoyed making music togethe, so we decided to stick with it. After three years we are very pleased to have just released our first full length album.
2.How would you describe your musical sound? Heavy psychedelic metal. Our sound has changed drastically since the beginning of the band. We were originally an instrumental trio, and added a vocalist after about two years of playing. Our sound got much darker and heavier but still included some of the melodic elements that were present in our earlier work.
3.What are some of the lyrical topics and subjects the band explores with the music? Lyrics are the last part of our songwriting process. We have all contributed to the lyrics on this album. Usually they are about mysticism or little stories that we come up with. We don't really have any sort of topic we always stick. Usually someone will just come up with something that we think is cool and that's what we will use.
4.What is the meaning and inspiration behind the name Barashi? A Barishi is a shaman in Mongolian and Siberian cultures who practices bone-setting.
5.What are some of the best shows that the band ha splayed so far and also how would you describe your stage performance? Our live sound is significantly different from the sound on the album. A large part of this is due to the fact that the album was recorded in E-standard and we play live in C-standard. The down tuning makes the songs heavier while, hopefully retaining the more melodic elements. We like to keep the energy high so our set generally consists of the more aggressive tracks. As far as shows go, its always a blast to play our home town of Brattleboro Vermont. There's a large gothic church downtown that we rent and have shows in. Its a perfect setting and the maniacs in this town are always down to come out and go nuts for a show!
6.Do you have any touring or show plans for the future? we would love to set up a larger tour in support of this album. As it is we are just gigging sporadically around the north east. We have quite a few dates lined up for the next couple months which is great. we really just love to play as much as possible.
7.Currently you are unsigned, are you looking for a label or have received any interest? I think signing with a label could be very rewarding. It could be really great to team up with a label that would really help further our music.
8.Are there any other musical projects besides this band or is this a full time line up? Its definitely a full-time line up. We've been working on this for over three years now and it has become a huge part of all of our lives.
9.On a worldwide level how has the feedback been to your music by fans of progressive and extreme metal? The album was just released, we don't even have physical copies yet, so we haven't gotten that many reviews. The ones we have received though have been resoundingly positive. We're grateful that people are willing to take time to listen to our album, and its great that it seems to be resonating with some people. Its really just great to be able to release an album after putting in so much time and hard work.
10.What direction do you see your music heading into on future releases? Who knows. When something strikes us we just go for it. Since the formation our sound has gradually gotten heavier and more aggressive, so we may delve deeper into some darker territory. New songs are already in the works and we are performing some of them live.
11.What are some bands or musical styles that have influenced your music and also what are you listening to nowadays? We draw inspiration from a wide range of music. Mastodon and Opeth, as well as bands such as My Bloody Valentine and the Cure have had significant impact on our work. As far as what we listen to, its an incredibly eclectic mix. Collectively we listen to everything ranging from jazz, metal, hip-hop, rock, you name it. None of us are all that crazy about this new alt-folk pop movement though.
12.How would you describe the metal scene in your home state of Vermont? There is some real talent hiding out in the hills here. Nectars Nightclub in Burlington has metal nights where you can see a variety of Vermont metal acts alongside touring bands. One of our favorite bands, Vaporizer is from the Burlington area. Those guys fucking tear it up!
13.Outside of music what are some of your interests? Partying and racket sports!!! Sascha our singer is a crazy rollerblader and is usually doing backflips in a halfpipe somewhere when we are not playing.
14.Any final words or thoughts before we wrap up this interview?
Thanks so much for the interview!
Check out our album on bandcamp: http://barishi.bandcamp.com/album/barishi
and our Facebook page for updated events and info: https://www.facebook.com/barishiband

Posted by OccultBlackMetal at 5:57 PM No comments: 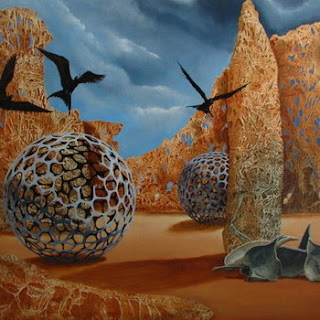 "Holy  Mountain"  begins  with  heavy  and  melodic  sounding  progressive  metal  guitar  riffs  along  with  some  drums  and  you  can  hear  bass  guitars  in  the  background  which  also  leads  up  to  saxophones  as  well  as  a  small  amount  of  clean  playing  and  then  melodic  clean singing  vocals  kick  in  before  evolving  more  into  aggressive  screams  and  then  guitar  leads  and  solos  start  coming  in  and  out  of  the  song.

"Through  Mountains,  Through  Plains"  kicks  in  with  melodic  clean singing  vocals,  heavy  guitar  riffs  and  drums  and  you  can  also  hear  bass  guitars in  the  background  and  as  time  goes  on  by  the  music  gets  more  progressive  sounding  along  with  some  aggressive  vocals  which  also  leads  up  to  a  brief  use  of  clean  guitars  before  getting  heavy  again.

"The  Waters"  comes in  with  drums  and  heavy,  melodic  and  progressive  sounding  guitar  riffs  along  with  some  black  metal  influenced  screams  a  few  seconds  later  along  with  some powerful  sounding  bass  guitars  and  towards  the  end  there  is  a  brief  use  of  guitar  solos  and  leads.

"Jaguar  Scarification  Ritual"  which  was  also  the  last  song  on  the  album  begins  with  sound  effects  before  adding  in  drums  and  bass  guitars  which  also  leads  up  to  heavy  guitar  riffs that  also  utilize  a  great  amount  of  melody  along  with  some  clean  guitars  which  also  leads  up  to  clean  singing  vocals  which  later  evolve  into  some  aggressive  sounding  screams  as  well  as  guitar  leads.

Song  lyrics  cover  dark  and  metaphysical  themes,  while  the  production  has  a  very  strong,  powerful,  heavy  and  professional  sound  for  being  a  self  released  recording  where  you  can  hear  all  of  the  musical  instruments  that  are  present  on  this  recording  along  with  some  of  the  songs  being  long  and  epic  in  length.

In  my  opinion  Barishi  are  a  very  great  sounding  progressive  metal  band  with  elements  of  melodic  black  and  death  metal  and  if  you  are  a  fan  of  this  musical  genre, you  should  check  out  this  album.  RECOMMENDED  TRACKS  INCLUDE  "The  Rider"  "Through  Mountains,  Through  Plains"  and  "Jaguar  Scarification  Ritual".  RECOMMENDED  BUY.