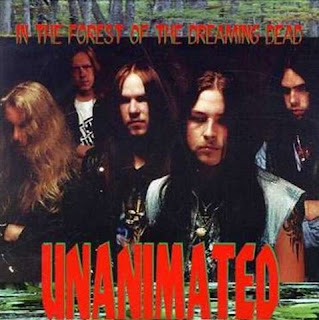 Unanimated are a melodic black/death metal band from Sweden and this is a review of their 1994 album "In The Forest OF The Dreaming Dead" which was released by both Pavement and Necropolis Records.

Drums are mostly fast with a lot of blast beats and they slow down when the music calls for it, while the keyboards when they are rarely utilized are only there to enhance atmosphere, as for the bass playing it follows the riffs that are coming out of the guitars and they have a powerful sound of their own at times.

Rhythm guitars cover a lot of ground with some slow and heavy riffs with some faster riffing that mixes black and death metal together with a lot of melody as well as some thrash influences, while the lead guitars
are very melodic sounding guitar solos that have a lot of thrash as well as classic metal influences influences, and there is a small amount of acoustic guitars on this album.

Vocals are black/death style growls with some screams being used at times with some spoken word passages, while the lyrics cover some depressing themes with an anti christian edge, as for the production on this recording which was recorded at Unicorn/Moose Studios, and Noble House Studios during the months of may and June of 1992 sounds very professional for it's time and you can hear all of the musical instruments that are present on this album.

In my opinion Unanimated are a very good band that have influenced a lot of bands and if you are a fan of melodic black/death metal, you should have this album in your collection. RECOMMENDED TRACKS INCLUDE "Whispering Shadows" "Silence Ends" and "Buried Alive" which is a Venom cover tune. RECOMMENDED BUY.

Posted by OccultBlackMetal at 9:04 PM No comments: