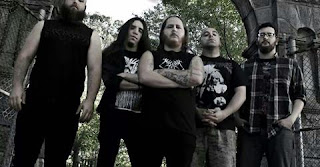 Well. We just announced out signing with Unholy Anarchy Records. Getting everything together for the album release our worldwide on June 15th. Have a show in a week or so with the mighty Septicflesh, Dark Funeral and Thy Antichrist. Also just announced New England Metal Fest with Morbid Angel, Dying Fetus, Thy Art Is Murder, Nile, etc. Working on some dates to work our asses off for this album!

2.You have your first full length coming out in June, how would you describe the musical sound that is presented on the recording?

We are heavily influenced by The Black Dahlia Murder, Between The Buried And Me, Behemoth, Cattle Decapitation, Naglefar and a ton of other bands. So it is it's own kind of thing but has parts where you will listen and be like "Hey that reminds me of Dying Fetus" or whoever, without ripping anyone off. It's fast but melodic and has structure. The music tells a story of its own. So it has a bit of something for everyone.

3.The band has been around since 2012 but waited until this year to release any music, can you tell us a little bit more about the earlier years?

We never ment to take so long to get the album done. The album has been written even longer. Maybe 2010 or 2011. We were have gone in to record 4 of the songs 3 times before this as an EP but was never really happy with how it came out, so we kept redoing it. All the while touring and trying to build a name through live shows and merchandise.

4.The lyrics on the album have a concept to them, can you tell us a little bit more about the story you bring out with your lyrics?

The album tells the tale of the Mother of Blasphemy, an ancient godlike Nephilim, and her rise to power and the resulting consequences facing mankind and the world.

5.Can you tell us a little bit more about you interest in the 'Nephilim' and also do you have any other interest in related things like Reptilians, occultism or Conspiracy Theory's?

Honestly at first, the name just kind of sounded cool. We were looking for some kind of cool god or demigod or something to base the name around when we found "Begat The Nephilim" and just had a.. "ohhhhhh" moment. But looking into it more over the last few years, there is alot of crazy shit to it. How they find all these bones and ancient drawings and such of these giants. I love stuff like that. Any kind of mythology, crypto whatever is cool as hell to me. Without going into too much, because I may be alone on alot of this and I don't want to speak for everyone, but a few of us are into aliens and ghosts and such. Our vocalist worked as a paranormal investigator for a bit. Then of course government type things everyone seems to dabble in a little bit. 9/11 and Bilderburg and illuminati and such.

We have played some crazy shows. Last 4 years of Summer Slaughter, last 4 New England Metal Fests, tons of packed local shows. It's hard to pick a few favorites. But one of them has to be, for me anyways, playing the second stage at a Summer Slaughter a few years back with Cannibal Corpse and having the stage rushed and people moshing and shit on stage. There is a few videos on YouTube of it. Crazy shit.
And for stage presence, we try to put alot of energy in it. Running back and forth and jumping off shit. Dillinger Escape Plan is a big band for all of us, so sometimes it turns into that. Jumping out and moshing with the crowd and such.

7.Do you have any touring or show plans once the new album is released/

We are working on dates now. We definitely have a few New England dates lined up. Westbrook, ME, Manchester, NH, Worcester, MA, Agawam, MA, Rutland, VT. But for full US/ Canada dates, those are in the works. Hopefully have alot soon

We did a weekend run with Internal Bleeding and the first thing they said to us was "You boys have to get to Europe. They will fucking eat you up over there" we have had quite a few people around the world who are always hitting us up trying to get us over there. Our kind of music is very accepted there and we can't wait to go over. We have had a few offers, but nothing solid enough to make sense at the time. But soon, we will be ready.

Basically a faster version of what we are doing now. Bump up the BPM a little bit and have at it.

Black Dahlia, Behemoth, BTBAM, Cattle Decapitation, Dillinger Escape Plan, we all really have a wide range of music we listen to and in small ways probably influence what we do. I'm a Dream Theater fan, so I have that kind of spin on some of what I do, but in death metal form. We take influence from new and old school death and black metal. From Suffocation to Origin and Emperor to Behemoth.
We all listen to a really wide range of music. In the van, we don't have alot of metal playing because we are around it all the time. So we will mix it up with some Three Six Mafia or Tom Waits or City and Colour or find something funny or dumb to listen to. Bill Burr podcasts and shit.

A few of us are into video games and nerdout about that. Most of us like site seeing. Going to museums and walking around cities and doing the whole touristy thing. We all have girlfriend's and wives so between the band, work and them, we don't have much time left. Haha

We are beyond excited to finally get this album out worldwide June 15th. It would mean the world to us if you could take a look on YouTube, pop up on our page, buy the album, come to a show, but a shirt, etc. This dream of ours is right at the tip of Our fingers and we appreciate all of the support we have gotten from everyone. We can't wait to see you all soon! 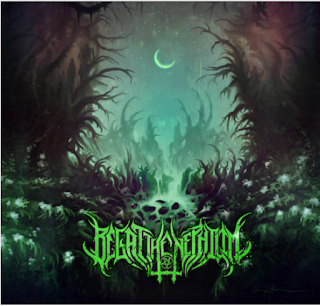 Begat  The  Nephilim  plays  a  musical  style  that  takes  melodic  black  and  death  metal and  mixes  it  in  with  some  symphonic  and  deathcore  touches  to  create  a  sound  of  their  own,  the  production  sounds  very  professional  while  the  lyrics  are  a  concept  album  based  upon  the  mother  of  blasphemy,  an  ancient  godlike  Nephilim,  her  rise  to  power  and  the  consequences  facing  mankind  and  the  world.