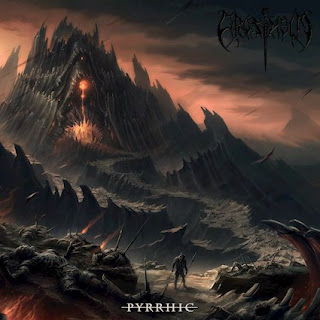 https://frosthelm.bandcamp.com/track/the-sorceress-single
Posted by OccultBlackMetal at 1:05 PM No comments: 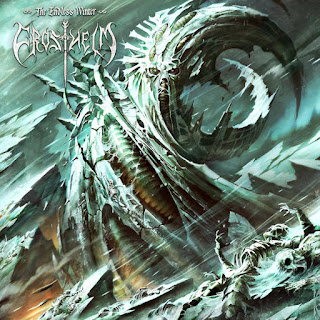 Frosthelm  remain  true  to  the  melodic  black  metal  sound  of  previous  recordings  while  also  mixing  in  even  more  thrash  elements  this  time  around  along  with  a  touch  of  death  metal,  the  production  sounds  very  professional  while  the  lyrics  cover  winter  and  fantasy  themes.

D - Frosthelm is a metal band from North Dakota with black/thrash metal influences.
JI - Comeing out of the friggid depths of North Dakota, we embody all that is Frosthelm. With freezing riffs and thundering rythm we ride the plains, slaying all in our quest for the Froshelm!!
2. How would you describe your musical sound?
D - Tight, catchy metal tunes brah!
T - We're an aggressive thrash inspired band.
JI - I would say that we are a Thrash/Melodic Death Metal band that utilizes strong Black Metal influences.
3. What are some of the lyrical topics and subjects the band

explores with the music?
T - Lots of fantasy, the dark aspects of life.
D - Video games, fantasy, murder, evil, ghosts, goblins, epic battle, the power of darkness, ect
Ji - The Frosthelm!!!
4. What is the meaning and inspiration behind the bands name?

D - I'm not sure. We picked four or five names and did some secret ritual black magic thing with 12 sided dice or something and Frosthelm is the one that got chosen. Ghost of Gygax?
Ji - The cold, war torn battle helm of a northern warrior.
5. What are some of the best shows that the band has played so far and how would you describe your stage performance?

T - We played the Cino de Metal show in Minot with two of our favorite North Dakota bands (Gorgatron and Enviovore) and it was a fucking blast! All the bands played awesome!
Jim - Just got done playing an awesome show with Resistant Culture, the tribal crust/grind band feat. members of Terrorizer. We had a blast!

JI - I honestly love every show we play. No matter if it's 5 or 500 peaple, I always have a blast.
6. Do you have any touring plans for the future?
D - Not at the moment
JI - Let's just hope that in the not too distant future Frosthelm will ride across this great nation on our bloody quest.
7. Currently you are unsigned, are you looking for a label and if so what kind of label do you feel that would be a perfect fit for the music?
T - Yes we are looking. A label that believes in us and is willing to invest in our music would be swell!
8. On a worldwide level how has the feedback been to your music by fans of extreme metal?
D - We've only gotten a few reviews from our recent EP so far, but they have been swell!
JI - Feedback has been positive so far. Can't wait to hear from more of our metal brothers and sisters around the world.
9. Are there any other musical projects besides this band or is this a full time line up?
D - Jim and I have a grind band called Ditchpig. I'm also a troubadour.
T - I have a solo acoustic project called Pfliger Fantasy.
JI - I'm trying to start some stuff. We will see what happens.

10. What direction do you see your music heading into on future releases?
D - The music we write is pretty varied as far as style goes, so I don't really know. I'm thinking about trying to bring nu-metal back.
JI- Let the evil ones decide.
11. What are some bands or musical styles that have influenced your music and also what are you listening to nowadays?

D - Metallica and Slayer are the bands that inspired me to play guitar in the first place, so my riffing style is heavily influenced by thrash. Bands like Dissection and Amon Amarth taught me about melody. I've been listening to Witchery, Dark Funeral and W.A.S.P. lately.
T - Bands like Scorpions and Gwar got me into being in a band. Also, I like Cattle Decapitation, Cephalic Carnage, Setherial; bands like that. I have been spinning discs by Deathspell Omega, Portal, and Noisear.
JI - The others guys kinda nailed it. What more can I say?
Jim - I've always had it for those dark and eerie type bands i.e. Immolation, Belphegor, Dark Funeral to name a couple. Early Sepultura is what really got me hooked on playing guitar though. Lately I've been listenening to Ketzer, Watain, and Martyrdod.
12. How would you describe the metal scene in North Dakota?
D - There are not a ton of metal bands here, but the ones that are playing are all good and pretty much cover the whole metal spectrum.
T - Isolated, Starved for national acts, but our local metal bands do a good job and support one another and the local scene.

JI - Though most may not think there is much metal in ND, we do have our share.
Jim - Unpredictable.

13. Outside of music what are some of your interests?
D - I like knives, video games, books, craft beers, hunting, fishing, and general out-of-doors activity.
T - Sluts, drugs, beer.
JI - That crazy shit no body wants to talk about.
Jim- Really into recording/producing music, and other shit like that.

14. Any final words or thoughts before we wrap up this interview?
D - Buy our EP! Stay frosty!
T- Ditto, son.
JI - Keep it metal!
Jim-

Posted by OccultBlackMetal at 3:17 PM No comments: 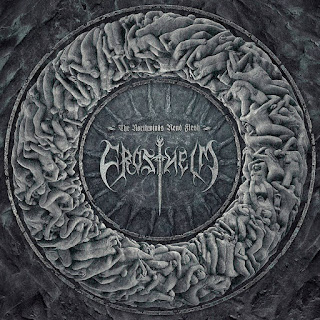 Drums  range  from  slow,  mid  paced  to fast  drumming  with  some  blast  beats  being  utilized  at  times,  while  the  bass  playing  has  a  very  strong  and  powerful  tone  with  heavy  riffing  that  dominates  throughout  the  recording.

Vocals  are  mostly  high  pitched  black  metal  growls  with  some  deep  death  metal  growls being  utilized  at  times,  while  the  lyrics  cover  darkness,  nature  and  corruption  themes,  as  for  the  production it  has  a  very  strong,  powerful,  heavy  and  professional  sound  for  being  a  self  released  recording  and  you  can  hear  all  of  the  musical  instruments  that  are  present  on  this  recording.