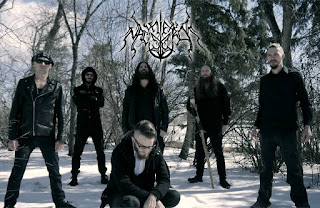 The members of Nachtterror for the most part have all moved on to other projects or real life stuff as of its completion, so unfortunately not very much.

Much more Majestic,  less about getting the moshpits going and more about thought provoking music. We've grown up from back then. And our story reflects that

3.This is also your first release in 4 years, can you tell us a little bit more about what has been going on during that time frame?

Members have moved onto different projects, but I (Maelkleth) still remain as the "lorekeeper"/ main songwriter for anything new.


4.What are some of the lyrical topics and subjects the band explores on the new album and also how would you describe your progress as songwriters over the years?

Lyrically we strive to be storytellers who delve into the deeper emotions of man. Vengeful rage, bitter sorrow, hateful revenge, and fearfull understanding. As we have grown as people, so too has our understanding of our lives and the trials we've faced and for some, still struggle with every day. These reflect in our songs so others may see themselves in our position and judge themselves accordingly.

5.Some of your earlier lyrics dealt with occult topics, can you tell us a little bit more about your interest in Occultism?

We have always been interested in lovecraftian horror, video games and their soundtracks, and Id have to say our interest in Japanese Psychological Horror games was more of an influence than just the occult. Most of us are familiar with Anton LaVey, Crowley, and the Necronomicon. But our biggest influence lyrically has always been Silent Hill.

6.What is the meaning and inspiration behind the name 'Nachtterror'?
The meaning of Nachtterror would to me be, the "Fear of what comes in the Night". At the time it was an attempt to find a foreign language word for Night terror. But over time all things have come full circle and its meaning has evolved to reflect what we aimed to do with our music in the first place.

The cover is representative of the start of a journey through the dark. The three Vatiel figures on the outside are meant to represent Courage, Wisdom and Power, which are virtues to be gained along the path of Judgement.  A figure is seen holding a dying woman, reflective of the story of Walter and his bride. The barren landscape represents the nightmare world which he seemingly resides. A cold forest. The doorway is the path in which he must walk to find enlightenment. The tall mountain in the distance borrowed from tarot cards using the same imagery. Looking at the Tarot for judgement one can usually see archangels blowing trumpets to resurrect the dead. In this way the three Vatiel figures are calling to Walter to become more than the guilt ridden man he has become.

Nachtterror has had the opportunity to play alongside some of the great Canadian Metal acts, as well as festivals throughout our history. From opening for Wolven Ancestry in 2009, to being featured at Black Mourning Light Festival,  not to mention our kinship with bands like Psychotic Gardening and Altars of Grief, among others. The Canadian metal scene and its promoters have always had a passion to support incredible bands, and we have been very fortunate to experience so many.
Our stage performance has always been centered around taking our audience to another place. We have always pushed for immersion and intensity. Whether it be in attire, ligting, or theatrical acting moments built into our live performance, we have always intended to have our live show act as an extension of our lore.

9.Do you have any touring or show plans for the new album?

Unfortunately at this time there are no plans to promote the album, but thats not dismissing any possibilities in the future.

10.On a worldwide level how has the reaction been to your newer music by fans of black, doom and symphonic metal?

From the little feedback we recieve Id have to say fairly good. Its hard to say when we havent been super active socially as of late.

Depending on interest, another concept album continuing the idea of the souls journey to be reborn anew. Possibly a collection of eps rather than a full length.

Video game music has always been a huge influence, but bands like Cradle of Filth, My Dying Bride, Wolves in the Throne Room and Nile have always had a big part in it. Akira Yamaoka and his Silent Hill music, and the old SNES games like Zelda and Metroid are major influences for me. Also a surprising amount of older Trance music gives me the ideas to write blackened riffs. There was also local band called The Orchard,  keyboards and really badass musicianship with an often terrifying atmosphere to their live show. I really wanted to play after seeing them.

13.What are some of your non musical interests?
Most of us like Video Games to some degree, but thats fairly common. Movies and Wrestling is prevalent in the band as well. Model making, Art, Photography, are some of the hobbies members share.

Nachtterror is a band of brothers who grew up facing each others darkness, and understanding a bit more of themselves for it. We have all fallen, and in that darkness we have all risen up with our own "dark god" of conciousness to guide us toward a new flame of hope. With this album, I hope the listener can reflect in their own Dark Mirror of Judgement and maybe face the things they do not wish to see. So they can rise up out of the sea of dread, and become the Ruler of their own Kingdom.

When  guitar  solos  and  leads  are  utilized  they  are  also  done  in  a  very  melodic  style   along  with  the  slower  sections  of  the  songs  also  showing  an  influence  of  doom  metal  as  well  as  the  music  also  having  its  progressive  moments  and  death  metal  growls  are  also  added  into  some  parts  of  the  recording,  spoken  word  parts  can  also  be  heard  briefly.  The  production  sounds  very  professional  while  the  lyrics  cover  dark  and  metaphysical  themes.