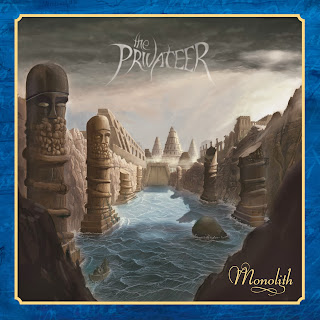 "The  Privateer"  begins  with  some  acoustic  guitars  and  rough  vocals  which  also  lead  up  to  some distorted  melodic  guitar  leads  along  with  some  bass  guitars  before  adding  in  heavy  riffing  and  drums  and  towards  the  end  there  are  some  guitar  solos  being  utilized.

Song  lyrics  cover  pirate  themes,  while  the  production  has  a  very  strong,  powerful,  heavy  and  professional  sound  where  you  can  hear  all  of  the  musical  instruments  that  are  present  on  this  recording.

Posted by OccultBlackMetal at 8:33 PM No comments: 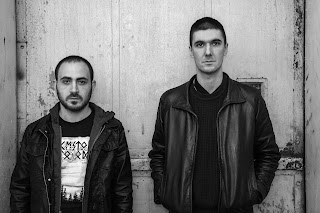 1. Can you tell us a little bit about the band for those that have never heard of you before?
Charlie from Extra Life, Andrew from Castevet, plus machines.
2.How would you describe your musical sound?
Heavy.
3.What are some of the lyrical topics and subjects the band explores with the music?
Cutting, draining, burning.

4.Do you have any touring or show plans for the future?
Yeah but in a selective way. We go where our money is green.
5.Currently you are signed to Last Things Records, how did you get in contact with this label and how would you describe the support they have given you so far?
The 7-inch is coming out in November on Last Things, which is my own label. It's not a big business enterprise. It's basically a self-release. Next year we have a full album coming out on a very legitimate label, but we can't announce those details yet.
6.On a worldwide level how has the feedback been to your recordings by fans of underground music?
The 7-inch isn't even out yet so no one has heard it.
7.What is going on with the other musical projects these days?
Seaven Teares, Period, and orchestra music.
Castevet. Improvised music. Solo guitar records.
8.What direction do you see your music heading into on future releases?
Who knows. We're still working on recording the album. The 7-inch isn't even out yet.
9.What are some bands or musical styles that have influenced your music and also what are you listening to nowadays?
Influences are too many to count here. On my turntable right now is Wovenhand.
Currently, I'm listening to a lot of Milton Babbitt, Uncreation's Dawn, and Genesis.
10.Outside of music what are some of your interests?
Little else. I used to read a ton. Nowadays, not so much. I'll probably have another heavy reading phase.
Distance.

Posted by OccultBlackMetal at 7:08 PM No comments: 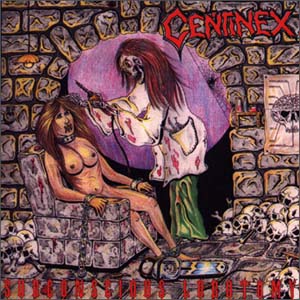 "Dreams  Of  Death"  begins  with  some  soft  acoustic  guitar  which  utilizes  some  finger  picking  before the  heavy  guitar  riffs,  drums  and  growls  make  their  way  into  the  song  along  with  some  dark  sounding  melodies  and  then  the  music  starts  getting  a lot  faster  with  some  blast  beats  before  slowing  down  again.

"Inhuman  Dissection  Of  Souls"  begins  with  some  heavy  guitar  riffs  and  drums  before  slowing  down  and  adding  in  some  melody  and  growls  and  then  switching  back  and  forth  between  slow  and  fast  parts  along  with  some  blast  beats  and  screams.

"The  Aspiration"  begins  with  some  heavy  guitar  riffs,  drums  and  growls  before  getting  fast,  primitive  and  adding  in  some  blast  beats  and  then  the  song  starts  switching  back  and  forth  between  slow  and  fast  parts  as  well  as  adding  some  melody  in  certain  sections.

"Everlasting  Bloodshed"  begins  with  some  heavy  and  melodic  guitar  riffs  and  blast  beats  which  leads  up  to some  screams  and  growls  and  towards  the  end  guitar  solos  and  leads  are  added  into  the  song.

Posted by OccultBlackMetal at 11:58 PM No comments:

1. For those that have never heard of you before can you tell us a little bit about the band?
Brent:well we're a 5 piece Symphonic Black/Death Metal band from St. Louis, Mo.
Markov Soroka:We are currently a 5-member symphonic black/death band from the Midwest of the States.

2.How would you describe your musical sound for those that have yet to hear the music?
Brent:Very Symphonic Black Metal with heavy hints of Melodic Death Metal.
Markov Soroka:-I'd recommend the music to anyone who likes Dissection, Amon Amarth, Dawn, Sacramentum, or even Emperor. We take influence from many different styles of music.


3.The song lyrics cover alot about auras, can you tell us a little bit more about your song writing?
In the musical and lyrical aspect of Eternium, the "auras" are the name of the characters and places that are associated with the story of Eternium. Aura [insert something here] is usually our preferred method of writing the songs. Aura Titian is the main protagonist of our debut album, "Repelling A Solar Giant." There are many other key characters, such as Aura Amethyst, Titian's love, and Aura Noir, the corrupted haze that took possession of the Solar God. I don't want to give away much of the story, since it is for the listener to find out by listening to the album.

4. The band started out as a solo project but now there is a full band, what was the decision behind forming a full line up, instead of being solo?
Brent: It's easier bouncing ideas off of other people than just yourself, besides, it more fun.
Markov Soroka:The band was originally a solo project in 2011, but after finding live members, they proved to be very influential to me. We've been a five-piece ever since, and we collaborate directly and indirectly.


5. What is the meaning and inspiration behind the name Eternium?
I would not like to confirm nor deny this, but in the story, "Eternium" is implied to be The Solar God of Solar Gods.

6. What are some of the best shows that the band has played so far and how would you describe your stage performance?
Brent: Definitely Nile. Nile was extrodinary. I'm also looking forward to our upcoming shows with Obituary and Absu. I'd say we're reletively energetic on stage.
Markov Soroka:Our best show, hm. That is a tough one. For me, personally, I'd like to say that when we opened up for Nile, we had a pretty solid performance. After the show, Karl Sanders told us that he liked our sound, so that obviously meant a lot to us.

7. Do you have any touring or show plans for the new album?
Brent: I don't want to give to much away, because we're still hashing everything out, but you'll definitely see us on the road later this year.
Markov Soroka: I don't want to give anything away yet, but yes, we are planning to do some kind of touring. We play shows regularly around the area. In fact, we are opening up for Obituary and Absu in the coming months.


8. On a worldwide level how has the feedback been to your music by fans of black and death metal?
Brent:It's been received really well, which is super awesome. Words can't describe how stoked I am that people have been digging our music.
Markov Soroka:It's been way bigger than I ever expected it to be. After hearing your own music for so long, it starts to wear old on the ears, so it's nice to hear feedback constantly. On a world-wide level, it's amazing. Usually I contact people myself since I like to connect with fans and talk about music with them, but as of late, they've been contacting us, which is always a good feeling.


9. Are there any other musical projects going on these days?
Brent:Yeah, we all have our own things going on besides Eternium. Markov has a couple projects going on, and we've even discussed working together on a Funeral Doom project. Gabe has a couple things going on, including a Girndcore band called Rotted Brainyard. Chad has a couple things going on, one of them being a more Progressive band called Tumult. I'm currently working on a project called Dakhma which more feelsy Black Metal stuff, very influenced by Woods of Ypres and Agalloch.
Markov Soroka: I believe all the members have other projects as well as Eternium. Chad Griffin has a few up his sleeve that he's shared the idea with us, but we can't give anything away here... Gabe Price has a few death metal and grind projects that he wants to get on foot, Brent Dossett has even had a hip-hop project that he wants to do at one point. Ryan Kelley used to play in Archon, a black/folk band. As for myself, I have a funeral doom project, a black metal project, and a sort of "mega" project that I can't really reveal anything about yet.

10. What direction do you see your music heading into on future releases?
Brent: Relevtively the same. We want to make things a bit heavier and a bit more progressive as times goes on.
Markov Soroka: Hopefully in a good one! The responses we have gotten as of late are extremely prominent and that alone fuels us to keep going on in a positive way.

11.What are some bands or musical styles that have influenced your music and also what are you listening to nowadays?
Brent:Too many, haha. As far Metal goes, Cannibal Corpse, Morbid Angel, Carnage, Wombbath, and Agalloch have really influenced me. As far as what I've been listening to lately, I've been listening to a lot Folk Rock/Indie Rock stuff like The Decemberists and Mumford And Sons. Also this Jazz artist by the name of Regina Spektor has been getting a lot of play lately.
Markov Soroka: I personally was inspired greatly by the Swedish melodic black metal scene in the vein of Dawn, Sacramentum, Azure, Dissection, etc. As for what I am listening to nowadays, hmm... Well, I've been really obsessed with atmospheric black metal as of late, as well as funeral doom. So just on the top of my head: Ruins of Beverast, Alrakis, Esoteric, Isis... I've also been digging Fleshgod Apocalypse quite a bit.

12.Outside of music what are some of your interests?
Brent:Well to be honest, I'm a complete nerd. When I'm not playing music I', either watching anime, playing video games, and more recently, DnD.
Markov Soroka: I'm an avid video game fan. You'll usually see me playing DooM online through a port called ZDaemon. If anyone reading this ends up downloading and playing, find me on there! The name is _Death_. Aside from that, I try to study medicine and prosthetic work from time to time.

13.Any final word or thoughts before we wrap up this interview?
Brent:Thank you for this oppurtunity. I really appreciate you taking time out of your day for this interview!
Markov Soroka:Thank you for the opportunity, and it was definitely nice talking to you! And to fans/readers: Go listen to our album! We have links up everywhere, and I'm sure people have leaked it on downloading sites. Of course, we would be eternally grateful if you bought the physical CD, and that is it's own charm. 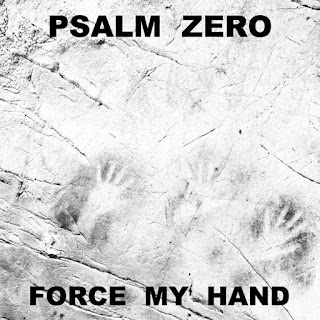 "Force  My  Hand"  begins  with  some  industrial and  noise  rock style  guitar  and  bass  riffs  along  with  drum  programming  and  clean  singing  melodic  vocals  and  a  minute  later  black  metal  screams  start  coming  into  the  song  along  with  some  melodic  guitar  riffing.

"Willpower"  begins  with  some  acoustic  guitars  and  clean  singing  vocals

"Song  lyrics  cover  philosophical  themes,  while  the  production  has  a  very  strong,  powerful,  heavy  and  professional  where  you  can  hear  all  of t he  musical  instruments  that  are  present  on  this  recording.