The Astroplex is a two men team, Herr Nox & John Steele. Between the both of us, we share the work load that needs to be done. in order to get this project going. We are from Canada, in two different Provinces, Quebec and Ontario. Herr Nox is the singer, lyricist, graphic designer and wrote those really cool 80’s movie soundtrack tunes on the album. I, (John) play most of the instruments, wrote the main songs and handled the production side of things, including recording and mixing. Our good friend, Jonh M.Miller, did a fantastic job on the mastering of the album.

2.You have an album coming out, how would you describe the musical sound that is presented on the recording?

When we decided to record the album, we both had a very precise vision on what we wanted the album to sound like. We aimed for songs that would be reminiscent of early 2000’s melodic death metal and melodic Black metal scene. We also wanted a faux 1980’s, sci-fi flick, soundtrack to serve as the catalyst for the story we wanted to tell. It was the combination of these two genres that helped facilitate our narrative.

3.You refer to your music as 'Space metal', can you tell us a little bit more about this term?

We approached the writing of this album like you would writing a book. We developed a story line, with plots and sub plots. When we were done, it was clear that this could not be classified as a traditional black/death album. We tried looking up metal genres that we could be associated with, and we concluded that it was perhaps best to come up with a classification that would describe us best. The album is set in space, with space ships and droids and other-worldly planets. It only made sense to call it what it is, Space metal!

4.Your lyrics cover science fiction themes; can you tell us a little bit more about your interest in this subject?

We both grew up loving the sci-fi movies of the 1980’s. Although some of these movies may look a bit outdated in both special effects, or even story-telling, the fact remains that it still holds fond memories for the both us. So we set out to have an album where each songs are a chapter that helps tell the main story. Herr Nox is a great lyricist, and he has crafted a really interesting way of telling the narrative through each songs.

5.What is the meaning and inspiration behind the name 'The Astroplex'?

The Astroplex, is the name of the ship used by Satis, (our main character in the story), and her crew. We wanted a name that would reflect the genre we play, so we went with this name. We just shot band names back and forth, and The Astroplex was the one that we both agreed on.

6. Currently there are only 2 members in the band, are you planning on expanding the line up in the future or do you prefer to remain a duo?

Our situation is different than most people. We both reside in two different Provinces, separated by an 8-hour long car drive. This creates a bit of a challenge when wanting to rehearse songs or finding band members, but that being said, we are both open to the idea. Should we get an interesting offer, who knows? As far as involving other people in the writing process, we’ll see. Writing the songs, producing, recording, mixing and overall doing everything ourselves is very difficult and time consuming. Maybe, if need be, we’ll recruit other people to help us on in the future.

We have not received any offers as of yet. To be honest, we both agree that to sign to a label, we would have to come out on top. I will never sign a 360 deal! Being an independent band means that we have 100% control over the creative process and the income we generate. We set our own deadlines and get to work in an environment of our choosing. No big costly studios, which we end up having to pay back to the label before seeing any revenues. We are not saying no, but in order to sign, we’d have to have a really sweet deal, and that is very unlikely.

8. On a worldwide level how has the feedback been to your music by fans of black metal?

The reviews are coming in and feedback from the fans is abundant. In general, people get it. Actually, they get it way more than we had anticipated. People know that this is not by any means a traditional black metal band. We have elements of it for sure, but it is not flat out what we set out to do. We live in a great time for music, where you can experiment musically without totally alienating your fan base. We love Emperor, Immortal, Gorgoroth and Dimmu Borgir. But this is not what we do. It’s in the song writing for sure, but it’s not the main focus. Today’s metal audience is very open minded and diversified, which helps bands such as ourselves find a “niche” market.

We decided to put out this album as a mean to introduce our fans to the band, and to the concept we wish to explore. Now in the future we are entertaining the idea of releasing songs independently. So, for example, we may put a song out each month instead of waiting a year to put out an entire album. The concept is being used by other artists in other genres, and they are doing better than traditional album releases.

John: For me, during the writing of this album, I was listening to a lot of Arch Enemy, Dimmu Borgir, Behemoth and 70’s rock. I think it comes through in the songs. Nowadays, I’m listening to Bloodbath, Opeth, Katatonia and The Devin Townsend Project.

Herr Nox: for this album, I immersed myself completely in 80s movies and listened to plenty of synthesizers soundtracks. The likes of John Carpenter and Vangelis can be heard in the instrumentals, I'm sure. As for today, I would say I listen to almost anything. From Mozart to My Dying Bride, from Perturbator to Igorrr. David Bowie is always in my playlist.

11.What are some of your non-musical interests?

John: I love History, politics (although I am getting a bit saturated with it lately) and philosophy.
I love to read up on psychoacoustics and the physics behind the sounds we hear and how we perceive them. I do a lot of recording and mixing, so this translates well into the work I do.


Herr Nox: movies, visual arts, psychology and science-fiction. Anything related to space (from a scientific standpoint) will get my attention. I find space exploration fascinating.

John: I would like to thank you for giving us the chance to speak about this project with your audience. We love to connect with new people. Thanks again for the review, we really appreciate.

Herr Nox: thank you for the interview, it's greatly appreciated. Also, to anyone reading this, support your local scene. A few good words will make a difference for it is passion that fuels any artist.

Posted by OccultBlackMetal at 5:00 AM No comments: 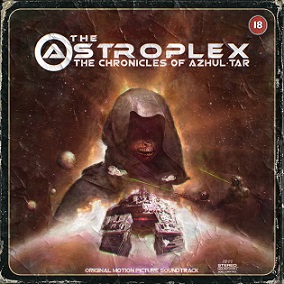 The  Astroplex  plays  a  musical  style  that  takes  black  and  melodic  death  metal  and  mixes  them  with  sci-fi  orientated  sounds  and  symphonic  elements  to  create  their  style  of  space  metal,  the  production  sounds  very  professional  for  being  a  self  released  recording  while  the  lyrics  cover  science  fiction  themes.