Jamie: We have been working hard with little tours and local shows to promote the album as well as writing new material. We have a few original tracks in the works as well as some killer covers that we hope to add to the set soon.

2.Recently you have released a new album, how would you describe the musical sound that is presented on the recording and also how does it differ from your 2 previous ep's?

Scott : The new album A Low Winters Sun is almost an extension of our last EP Fire Twin. We re recorded two of the three songs and added them into our full length. The Great Attractor and Fire Twin are both such epic tracks that we felt they belonged on a full length. The album was recorded by Jesse Gander at Rain City Recorders in Vancouver. He has worked with many amazing, heavy bands so it was an easy decision to decide to work with him. The album as a whole is quite aggressive and definitely much heavier then our first EP. We are really fucking stoked on the outcome.

3.What are some of the lyrical topics and subjects you explore on the new album?

Jamie: Ross and I tend to touch on topics and themes such as loss, longing, depression, philosophy, and cosmology. Ross' lyrics are very stark and brutal while mine are longer and more like prose.

4.Some of your lyrics also deal with existentialism, can you tell us a little bit more about your interest in this topic?

Jamie: The aspect of existentialism I am most drawn to is the idea that each individual is responsible for giving their life meaning. There is probably no god, and I probably only get one go around, so I'm going to try and enjoy it. To some that is very depressing. For me it's encouraging.

5.What is the meaning and inspiration behind the name 'Heron'?

Scott: Honestly, there isn't much meaning behind the name. Ross and I played in a Sludgy Grind band back in 2011 called Cathar. The first song we wrote was called Heron. Ross drunkenly leaned into me at the end of jam and said "Heron would be a sick name for a doom band and we should make that happen" here we are 7 years later.

Scott: We have been very fortunate to play some really killer gigs over the last two years. Most of them have been opening for bands rolling through town like High On Fire, Pallbearer, Weedeater, Conan and a bunch more. Many thanks go out to Vancouver's hard working promoters for giving local bands a shot to play. In terms of our stage performance we just giver from start to finish no matter how many people are there to see us play or wether or not its a Monday night or a packed Friday gig.

Jamie: We just wrapped up a short 5 show run in BC and Alberta. The shows were busy and we feel we were well received. Lots of copies of the album were sold and we are stoked on that! Planning to venture farther from home every tour so we plan to try an Eastern Canada or a Western US tour next. Ideally we would go to Europe after that. We have been booking more festivals lately and that is taking us to some unique shows closer to home.

8.On a worldwide level how has the feedback been to your music by fans of sludge and doom metal?

Jamie: We can't thank all the Metal blogs and listeners who have supported us enough. We are just four friends who like to write and play music together. The fact that other people come to shows or write reviews is very humbling and greatly appreciated.

9.What is going on with some of the other bands or musical projects these days that some of the band members are a part of?

Jamie :Scott plays in Sand Witch and they have a newer record out and play locally often. Bina has 900 projects on the go at any given time but has been playing in Mendozza for years. I have a solo project called Night Mother that is an outlet for more electronics-driven music. Ross is too busy being handsome for more musical projects.

Scott: Every album seems to get heavier. We hope to continue to combine sludgy doomy riffs with lots of post metal breaks. We are currently working on a few new tracks that are long and pretty devastating.

Jamie: We wear our musical influences like ISIS, Sleep, Sumac, and Corrupted on our sleeves but we also listen to lots of different styles of music that contribute to our sound. On the road bands like 1914, Russian Circles, Cage Grind Noire, Burning Witch, and Midnight always end up on the playlist.

Posted by OccultBlackMetal at 3:23 PM No comments: 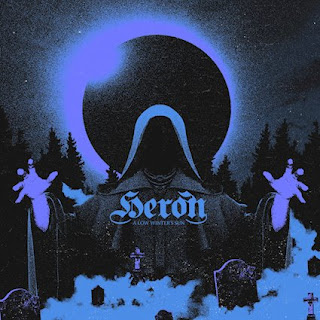 Heron  plays  a  musical  style  that  takes  atmospheric  sludge  metal  and  mixes  it  with  black  and  doom  metal  to  create  a  sound  of  their  own,  the  production  sounds  very  professional  while  the  lyrics  cover  insignificance,  existentialism  and  loss  themes.

https://heronvan.bandcamp.com/album/a-low-winters-sun
Posted by OccultBlackMetal at 2:00 PM No comments: