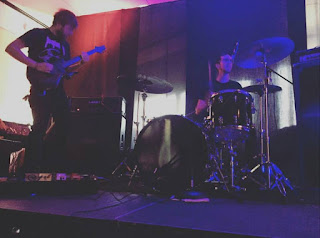 1.For those that have never heard of you before, can you tell us a little bit abut the band?

NEST was started around 2015. We are a doom two piece, just guitar, vocals and drums. We both started this when we had lulls with our other bands around Lexington Kentucky.
we wanted to start something a lot darker and more experimental than what we were doing at the time.  I (Kyle) grew up playing in bands in the local punk/powerviolence scene and Corey has had a couple hardcore/punk bands, so we talked about starting something that had that punch you in the face feel,  but was rooted in the ethereal doom we had both been playing recently in other bands.  But we both agreed it needed to be the heaviest music we'd ever written.


2.How would you describe the musical sound that has been presented on the recordings you have released so far?

The first release was much more rooted in the aforementioned raw powerviolence/hardcore aspect. I had also been getting back into more math type bands, like Slint (KY band as well), Shellac. etc. so I really started looking at how i could de-volve my guitar playing and look at it in a different way. Once we started down that path its only gotten more experimental in those aspects.

Corey writes all the lyrics, and the topics have always been very personal things we just so happened to be going through at the same time. "Metempsychosis" is our first concept album. This past year we both separately went through immense loss and grief in our personal lives. The beginning of the album starts with breathing getting weak and stopping, blending into a recreation of some past auditory DMT experiences, symbolizing the start of death. Then the album explores death and our thoughts of what happens after. It then closes the album with sounds from inside the womb to try and represent re-incarnation.

4.What is the meaning and inspiration behind the name 'Nest'?

The name NEST is loosely a metaphor for life in this reality, it can feel like home but at the same time is brutal and relentlessly buzzing with life, and all the pain and struggle attached.

5.Currently there are only 2 members in the band, are you open to expanding your line up or do you prefer to remain a duo?

No plans to add any members, we flow together really well just the two of us.

6/.What are some of the best shows that the band has played so far and also how would you describe your stage performance?

I personally love the house shows we've played, everything is ten times louder and much more intense in a basement. Our stage performance is pretty straightforward, we just let the music speak for itself and play it as loud and heavy as possible.

Yes, hopefully trying to get that worked out soon.

8.On a worldwide level how has the feedback been to your music by fans of black, sludge and doom metal?


The feedback has been overwhelmingly positive, we're really grateful for everyone listening.

9.What is going on with some of the other bands or musical projects these days that the band members are a part of?

Corey is currently only working on this project at the moment, his last band, They yearn for what they fear is absolutely amazing psych/doom, he's one of the best vocalist/drummers I've had the pleasure to work with. Im playing guitar in a stoner/doom outfit called Sonic Altar. Also playing guitar in a new death/doom project called Rotting Kingdom, with members of  Tombstalker and Arktos.

haha not too sure yet, most likely expanding on previous techniques and themes, but I guess we'll see when we get there.

(corey) Honestly I was listening to a lot of 90s grunge/ alternative and screamo at the time. Smashing pumpkins, Alice in Chains, Forn, obviously Thou. What I'm listening to at the moment. A lot of Type O-Negative, Dookie-era Green Day, Nothing, and Pink Floyd.

(Kyle) The obvious ones are Dystopia, early Orchid,  Neurosis, Krallice, also a bunch of black metal, early math and  raw doom, and  I was listening to A LOT of rap at the time. I listen to almost everything, but lately its been a lot of hawkwind, Howlin wolf, Craft's "Fuck the Universe". Just discovered paradise lost (late to the party on that one), and same as Corey a ton of Pink Floyd lately.

(Kyle) Im an abstract painter on the side. Traveling, also pretty much all the stuff Corey just said.

We just wanna thank everyone for their support, we've both been playing music all our lives and really bled a lot into this album. Its an overwhelming feeling that people are getting behind that.

Posted by OccultBlackMetal at 8:09 PM No comments: 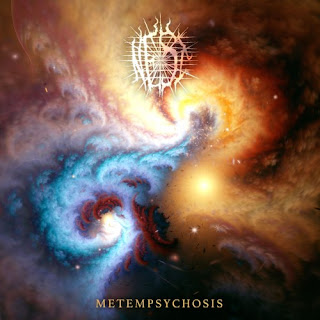 A  dark  sounding  intro  starts  off  the  album  along  with  some  distorted  drones  before going  into  a  heavier  sludge  direction  which  also  introduces  black  metal  screams  onto  the  recording  along  with  all  of  the  musical  instruments  having  a  very  powerful  sound  to  them  while  clean  playing  can  also  be  heard  at  times.

Nest  plays  a  musical  style  that  takes  black,  sludge  and  doom  metal  and  mixes  them together  to  create  a  sound  of  their  own,  the  production  sounds  very  professional  while  the  lyrics  cover  misanthropic  themes.

facebook  •  bandcamp
Posted by OccultBlackMetal at 2:52 PM No comments: