1.For those that have never heard of you before, can you tell us a little bit about the band?
We are a Pagan Folk Metal band based in Rome, a bunch of friends with two common passions, Roman history and music.

2.Recently you have released your first full length, musically how does it differ from your previous ep and demo?
It is another world completely.  In the mean time as we were composing Sic Transit Gloria Mundi we grew up a lot both as musicians and as people. We learn to communicate and understand each other and this new found complicity and harmony between the members of the band brought us this album and we cannot be more proud of it!

3.Your lyrics cover Paganism and Ancient Roman History, can you tell us a little bit more about your interest in these subjects?
We believe that if someone decide to play and compose folk metal he has to talk about his folkloric history and what greater history if not the one about Rome for us that were born and grew up here in the eternal city.

4.What is the meaning and inspiration behind the name 'Dyrnwyn'?
This one is actually kind of funny story. We were at the beginning of our musical journey and the direction to take was really blurred and unsure.We all came from different music backgrounds and each of the name we picked represented more ourselves as single people then the band. We fought and we discussed for quiet a few days until exhausted we decided that the first who will propose a name, whatever it would have been, in the next few hours would be the official name. Let’s say that
we’re happy it wasn’t something silly ahahah Dyrnwyn is one of the thirteen tresure of England. Is a black sword which when wielded by a pure of heart will harness the power of fire to his favour but when wielded by someone unworthy it will burn him to ashes.


5.Can you tell us a little bit more abut the artwork that is presented on the album cover?
The name of the album is Sic Transit Gloria Mundi that translated it would be “and that’s how the glory of the world disappeared” . Based on this concept we worked with Gianmarco Colalongo in order to represent it on paper and we can all see the result of this process.

6.What are some of the best shows that the band has played over the years and also how would you describe your stage performance?
The best show we did until now  are definitely the one with our brothers Atavicus in Rome and in Pescara. The atmosphere and the bond of friendship that binds us just made the concerts , pre, during and post a great experience all around.


7.Do you have any touring or show plans for the new album?
Not yet but we’re starting to plan an italian tour really soon followed by some dates in europe, germany, swiss, austria etc.

8.The new album was released on 'Soundage Productions', how did you get in contact with this label?
Our bassist and founding member ,Ivan Cenerini , has a remarkable cd collection and some of them have been bought through the soundage distr

9.On a worldwide level how has the reaction been to your newer music by fans of pagan and folk metal?
It has been really really good. We’ve received some first reviews and are extremely good  8,5/10, plus everyone who listen to the album really enjoys it and send us compliments about it.

10.What is going on with some of the other bands or musical projects these days that some of the band members are a part of?
Almost all of the band members are involved with other projects: Alessandro Mancini our guitarist and composer is currently on board of other two different projects , Drakens Orden (MelodicDeath) with whom is going to release a full lenght this month  and DragonhammeR (Power Metal) who recruited him as live guitarist.
Ivan Coppola our drummer is part of Ulfhednar  (Black Metal) with whom is taking part in a lot of concert here in Italy. The new found vocalist Thierry Vaccher is the singer of Manner (industrial metal) and Ivan Cenerini and Michelangelo Iacovella as well as Mauro Ricotta (former guitar) are composing for an original Atmospheric Black Metal project call AITA.

11.Where do you see the band heading into musically during the future?
A balanced mix between Black Metal, Atmospheric Black Metal and Classic Pagan Folk .

12.What are some of the bands or musical styles that have had an influence on your music and also what are you listening to nowadays?
Here we need to make a brief list: Falkenbach, Manegarm, Moonsorrow, Draugr, Svartsot, Kawir, Istapp, Saor, Romuvos, Skyforger etc etc…
Nowadays they are pretty much the same with some occasional discoveries but in the same field as the one mentioned before.

13.What are some of your non musical interests?
Kick boxing, MMA, Historical re-enacment, D&D, Hiking, Trekking in nature and DRINKING ahahahah

14.Before we wrap up this interview, do you have any final words or thoughts?
We hope to be able to bring this album everywhere and play as many live show as possible especially out of italy. But to do so we need to ask everyone of you a favor, be curious of new music, give a chance to small names because they might surprise you and if you can, support them as you can. We play and compose our music for all of you out there because we want to connect with you in some way, conveying our emotion and ourselves into our songs and nothing give us more happiness then knowing that you’re there headbanging in your car or at home or down the stage listening to us!

Posted by OccultBlackMetal at 8:10 PM No comments: 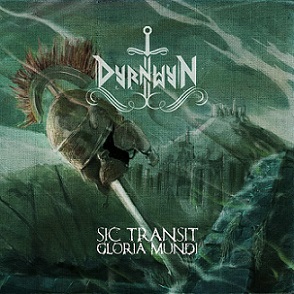 Dyrnwyn  plays  a  musical  style  that  takes  melodic  black,  pagan  and  folk  metal  and  mixes  them  together  to  create  a  sound  of  their  own,  the  production  sounds  very  professional  while  the  lyrics  are  written  in  Italian  and  cover  Pagan  Roots  and  Ancient  Rome  themes.

Posted by OccultBlackMetal at 8:56 PM No comments: